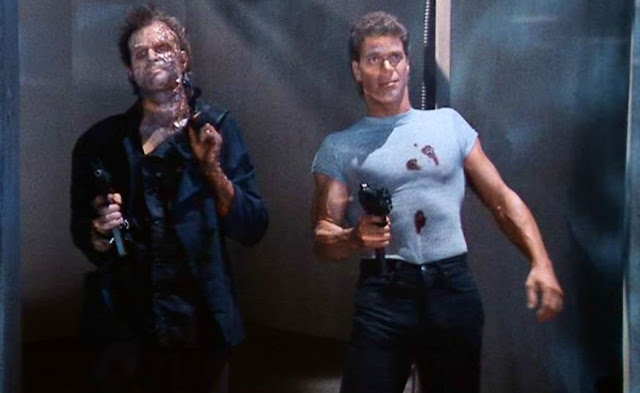 Buddy Cop Movies may have been a dime a dozen at one point, especially in the eighties, but one sub-genre within that sub-genre that has only been explored once (that I can think of) is the Zombie Buddie Cop Movie.  Joe Piscopo and Treat Williams in a buddy cop movie together would already be enough to get most people laughing at the cheesy potential… but now throw in a Mad Scientist and some zombies, and well, you have a truly unique experience for the whole family. That is, if your family is Starkwell and Lovelock.  It is DEFINITELY worth mentioning that director Mark Goldblatt’s only other directorial credit is the Dolph Lundgren “Punisher” movie.  This just keeps getting better and better.  Did I mention Vincent Price is in this?

[Crooks rob a jewellery store, Joe and Treat are called to respond!]

[Crooks are shot, they bleed a lot, but don’t fall down or die.]

Lovelock: Cops and Zombie Robbers!  I love it!

Piscopo blows one up with a grenade, and Treat rams the other one with a car.  Great effects, great violence, and the crowd goes wild.

Starkwell: Is it racist that the chief is ALWAYS an angry black guy?

Lovelock: Racist? Maybe.  Awesome? Definitely. “You guys pull this shit again, it’ll be your ass in the something something!”  And so on and so forth.

The Detective Duo meet at the morgue and find out that the two that they killed had already had autopsies performed on them.  This leads to them investigating a pharmaceutical company.  Almost IMMEDIATELY Piscopo breaks into an area he isn’t supposed to go in, finds a resurrection machine, and fights a fat fucked-up looking biker zombie.  Treat hears gunfire and goes to find and help his partner.

Lovelock: Well, his name is Roger Mortis… probably should have seen it coming that he would die.

[Piscopo and Becky from the morgue use the resurrection machine to bring Treat back.]

Lovelock: Either Becky from the morgue is a genius, or that is one easy to use resurrection machine!

Starkwell: Or the writers were lazy and bad.

Starkwell: And where are all the scientists that designed this machine? Isn’t ANYONE curious why there’s a resurrection machine here? Anyone can just waltz around the crime scene?  Where are all the police? How does Becky know about the side effects of the resurrection machine?  ISN’T ANYONE CURIOUS ABOUT WHO CREATED THE RESURRECTION MACHINE!!?!?!??!!

Lovelock had to try to tune him out, because Starkwell continued to ask questions for the next ten minutes.  Treat had to start wearing makeup to cover up the fact that he is dead, colorless and starting to decompose.  It was all a little silly.

Starkwell: Piscopo has at least five hundred more one-liners than any person should have in one film.

Lovelock: In one film?  Try in one lifetime.

The Duo end up fighting more decomposing zombie criminals while they try to get to the bottom of what has happened to Treat.

Lovelock: Take anything, but don’t take my hair!

Starkwell: Why is he looking at himself in the mirror, shirtlessly brushing his hair?

Then there’s this crazy scene in Chinatown where a mad Chinese wizard turns on some magic electricity in his butcher shop and a bunch of food comes to life and attacks them.  It is an impressive sequence and has Lovelock doing roundhouse kicks.

Starkwell: Why would a skinned headless cow carcass come back to life?

Lovelock: Forget it, Jake. It's Chinatown

Vincent Price plays a rich dead guy who we all suspect is behind the resurrection machine.  Treat goes to investigate the guy’s house with the girl they met at the pharmaceutical company.

Starkwell: I hope that was the writer’s subtle way of implying that Reagan was a zombie.

Then Treat finds Piscopo dead and seriously isn’t very shocked or upset.  But then again, no one ever really seems upset about anything in this movie except, of course, the angry black police chief, who is REALLY worked up all the time.

[Pharmaceutical Girl is actually a zombie.  She takes a shower and then she decomposes, melts and turns into dust in seconds.]

Starkwell: How come she looked normal up until RIGHT NOW, whereas Treat is slowly decomposing?

Lovelock: Just stop being an asshole and enjoy this.

Starkwell: You’re right.  That is pretty sweet.  IF YOU HATE LOGIC.

Treat figures out that it ISN’T Vincent Price after all, it’s the Evil Coroner!  Anyways, then he ends up riding an unmanned ambulance down a hill, and explodes.  And Becky is dead.  And then it turns out it really IS Vincent Price behind it all.  This was one of Price’s last roles, and he is as awesome as always.

Starkwell: Why would they use Piscopo?

[Piscopo immediately joins forces with Treat, they kill the Coroner by blowing him up,  and then they blow up the resurrection machine, and now they’re gonna die.]

Starkwell: Seriously that’s it?  Everyone dies and no one cares?  Wow.

Lovelock: They didn’t even kill Price…

Then the credits roll and a song clearly written for the movie called “Dead Heat” starts playing, and Lovelock and Starkwell very randomly and unexpectedly start dancing.
Documented by Kev D. and Posted at 08:40