Dawn of the Mummy. 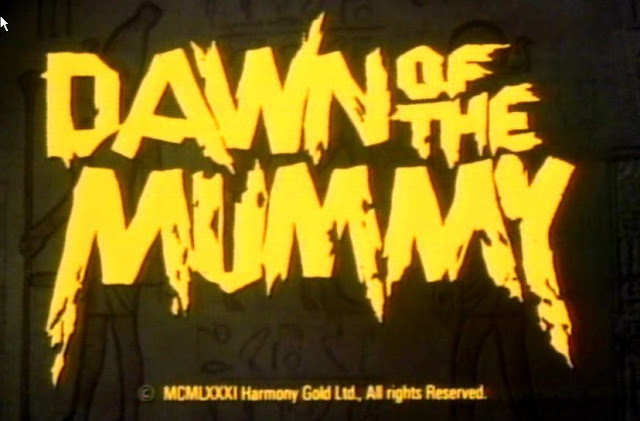 When it comes right down to it, a mummy is essentially a zombie.  Granted, most of the time, they have supernatural powers, and become something much bigger and badder than just a straight-up walking corpse.  But take away all the fanfare, and really what you have is a basic walking dead person.  So it surprises me that there aren’t any “zombie” movies where the zombies are just a bunch of mummies.  But wait! LOOK NO FURTHER, because the early eighties gave us exactly that with this ridiculous over-the-top mummy film gone awry.  I can’t wait to show it to the dudes.

[Egypt, 3000 BC… pharaohs ride through the desert and steal children.]

Lovelock: EASILY the wussiest pharaohs I have ever seen.

Starkwell: Seriously… someone just throw a rock at them.

Then there’s this weird ceremony where they show a dude being gutted, and some crazy priestess chanting shit about how he will rise one day with his army and kill everyone.  What will make them rise, you ask?  Someone must break the seal of the tomb.  Of course, then we go to present day where some zany American thief and his goons are blowing up the tomb entrance.  They have to wait a day before they go in, because apparently the poison inside will wear off by then.

[Thieves ignore a crazy old lady who tells them of the curse.]

Lovelock: Stupid Americans!  Wait… is that the same old lady from 5000 years ago?  That’s one old-ass woman.

Starkwell: This American dude is like reverse Indiana Jones.  Did he just shoot the old lady?

Then a couple of dudes try to jump the gun on the American and go into the recently opened tomb before he goes in.  Their faces start melting.  Lovelock and Starkwell both look at each other and realize they are in for one nutty ride.

Lovelock: This is like the beginning of “Beverly Hills Cop” except in New York.  And even worse.

And that’s it for New York.  As soon as the credits end, we see stock footage of a plane flying and a voice on a phone telling someone he is sending models to Cairo for a photo shoot and that the photos need to be top notch, or they will lose the account.

Lovelock: This is all going to be about a photographer trying to get good shots?

Starkwell: Good to know that something REALLY IMPORTANT is on the line.

Lovelock: "NO!  Mummies! Don’t kill the models!  They need to make this a successful photo shoot!  Or they’ll lose the account!"

Starkwell: Textbook ‘do or die’ situation.

[The models find a bunch of dead people's heads in the desert.]

Starkwell: Wait… they see that and aren’t going to just go home?

Lovelock: No way Jose! They need to get the shots!

[The models’ tour guide is leaving and will be back in three days… four days tops, he says.]

Starkwell: Why would anyone just allow themselves to be left in a desert for an indeterminate amount of days?  This movie is so fucking stupid.

[In the morning, the models take some photos in the sand and listen to… the radio?]

Starkwell: Right… I’m sure that you’d get excellent reception on an American rock and roll station on a shitty little radio.  IN THE DESERT.

Lovelock: I guess those Jeeps have HUGE invisible antennas.

Then the thieves blow open doors in the tomb looking for treasure.  They even open the mummy’s coffin, and touch him and shit.  I think Lovelock let out a huge “GROSS”.  Then the thieves accidentally shot guns at the models, and rather than being scared AT ALL, the models and photographer go to yell at the thieves and then start venturing into the tomb… for fun!

Starkwell: Wait, so they see the tomb, and the mummy, and the photographer’s first thought is how great this will all be as a backdrop to his shitty model photo shoots?

Lovelock: Seriously the zombies need to start coming and killing these idiots.  Or the Thief guy could too...  Why doesn’t he just shoot them?

Starkwell: Also, the stupid models are randomly driving around a desert, with no guide or map, and they just happen to come across the tomb?  And also, they won’t get lost?  FUCK THIS FUCKING MOVIE.

[Cuts immediately to the models’ campfire and Douchey Male Model is singing a song he just wrote about the Nile.]

[Kumbaya session is interrupted because one model finds their horses dead, and then a zombie show up.]

[Zombie falls to the ground immediately and dies.]

Lovelock: Why.  Why do this to me?

After finding dead horses and a melty faced zombie, after one of the girls had her hand melted, and after the thief guy warned them about the dangers of the tomb (while oddly talking like someone who can’t speak English all of a sudden), photographer decides that they still need to stick around to finish the photo shoot.  Then, for NO REASON, one of the models and the Thief Guy start making out and bone.

[The Mummy strangles the Crazy Old Lady from the beginning.]

[The Mummy’s army of the dead starts rising out of the sand.]

[Cut to the morning, the models argue with the photographer about wanting to leave.]

Lovelock: This back and forth!  What is this movie trying to do to me!

[One model wanders off and gets lost in the tomb, the Mummy watches her but does nothing.]

Lovelock: Alright.  What the fuck, Mummy... make it happen!

[The scared model is comforted… by the photographer… and then they make out?  And later bone?]

The guide comes back, and rather than EVERYONE wanting to leave for Cairo, the only thing Douchey Male Model is concerned about is where he can score some more pot, and one of the Bimbo Females wants to go shopping for jewelry.  I think the writers were smoking too much pot.  Or not enough.  Not sure.  Maybe they were busy shopping for jewelry.

The Mummy showed up in town and drove a cleaver through one of the thieves’ heads.  Lovelock said it was well worth the wait.

[Two models go swimming naked in a huge lake… in the desert.]

Lovelock: Obviously.  Where are all of those lights coming from?  Probably the pool lights, from the pool they filmed this in.

They can’t find Melinda, because she just died after her swimming funtime (well, they don’t know that, but we do).  Two of the other models are worried, but the photographer is like “Who cares?  If she’s not back before we are ready to go, we’re leaving without her.”  He literally wants to leave her in the desert to die.  One of the girls suggests “Maybe she went to town.”  But… she would have had to get there without a car or a horse.  And yet, no one seems to think that’s odd.  Oh well.  Let’s just continue with the photo shoot, thought EVERYONE.

Lovelock: Please.  Please ARMY OF THE DEAD.  Start acting like one, pronto.  This has like the lowest body count I’ve ever seen.

American Thief finds his dead friend and totally goes nuts.  He goes looking for the gold and is BATCRAP CRAZY.  Then he is strangled.  Hooray!  The models all hang around camp waiting for Melinda to show.  In fact, they’re so concerned that they’re eating figs and drinking beers.  Douchey Male Model goes into town to attend a wedding and get stoned.  Wow.

With fifteen minutes left we finally get a little more zombie action, and at long last the photographer is strangled, torn apart and eaten.  Then mostly everyone dies.  The Mummies make it to town and start eating everyone.  This is delayed gratification at its finest.  There’s even a sweet eyeball gag at one point.  Some of the surviving characters blow up the main Mummy with dynamite, and somehow assume that it’s over?  It makes no sense.  Anyways, then the Mummy comes out of the fire as they walk away and the credits roll.  Awesome.  If only there had been a sequel.
Documented by Kev D. and Posted at 09:20