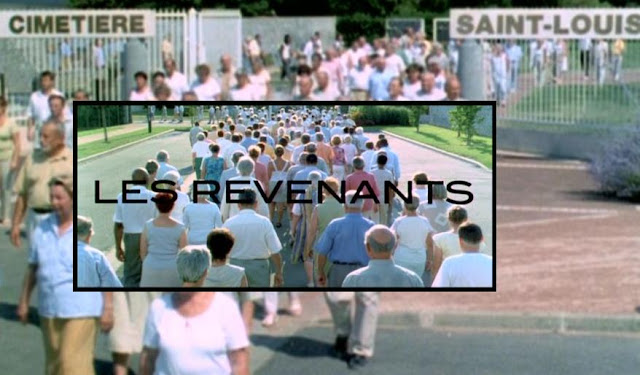 What if the recently made dead people started coming back to life but were essentially just walking empty shells of their former selves?  They’re not violent, they’re not particularly scary, they just came back.  Where do we put them?  How do we deal with them?  How do they deal with society as it is now?  All of these are questions that French film “Les Revenants” decides to tackle in an unusual and somewhat fresh take (pun intended) on the idea of the walking dead.  After explaining the premise of the film to Lovelock, he already left the room.  I guess that just leaves me, my notepad, the film, Starkwell, and his often lengthy monologues that I will do my best to capture and/or paraphrase.

[The film opens with a bunch of old people leaving a cemetery.]

Lovelock: Either someone really popular just died, or thems zombies!

Lovelock: The music and creepy walking noise brought me back.

Starkwell: Might be the most subtly scary opening I’ve ever seen…

Then there was a very serious scene wherein a bunch of important people in the city talked about what to do with all of the returned dead.  Are they refugees?  We can’t just send them home… it would be a tremendous effort.  They bring the army in to bring them all to a center with a bunch of cots and whatnot.

[People are being reunited with their dead ones, who look spaced out and a bit scary.]

Lovelock: How did they get that baby to look like the walking dead?  I think the French may have actually invented zombies to film this sucker!

There definitely seems to be something off about the undead here.  They talk a bit slow, they seem sluggish, and unable to really do the work that they used to do.  They just seem… well… off.

[We see one “zombie” at his office job, seemingly shocked by all of the progress that was made in his absence.]

Lovelock: Come on man! If I wanted to see a bunch of zombies doing office work I’d have gone to work today.

Starkwell: You have a job?

Some of the older zombies seem to wander away from the refugee center at random in the middle of the night.  No one really knows why, or what they are looking for.  And so the 'powers that be' develop a high powered sedative to knock them the fuck out, if needed.  It's never spoken of again, strangely.

[It turns out that the zombies don’t sleep… they just pretend to sleep.]

Lovelock: Right now, I think I might ACTUALLY fall asleep, but if anyone asks, you can say I’m just pretending.

Starkwell: You don’t find this fascinating?

Lovelock: On paper, yes.  In practice, on film, in French, watching it… not even a little.  On second thought, don't tell them I'm pretending.  Tell them I'm actually sleeping.

Some of the regular humans are trying to figure out just what the zombie humans are up to.  They seem to have meetings amongst themselves at night.  It’s all very weird and creepy.

Lovelock: How come all the dead people wear white and the living are in dark clothes?  Are we the bad Jedis?  What’s the deal?

Starkwell: Dude, go back to sleep.

[Office Zombie, Mathieu, has sex with his wife, main character, Rachel.  Some guy, named Gardet, spies on them with a night vision scope.]

Lovelock: You think he thinks it’s not voyeurism just because he’s all science and shit?

Starkwell: I don’t trust him.

Starkwell: I don’t even know anymore.

The Super Group of Important People have decided that the undead are only ACTING normal.  It’s just an echo of their formal selves.  They’re pretending.  What are they really up to!?!?!??!?!!?!?!

[Gardet follows Mathieu to the secret zombie meeting, he spies on the meeting in progress.]

Lovelock: He certainly likes to peep on people…

Starkwell: What are they doing?  I’m a little afraid.  A little really afraid.  In one way, this movie isn’t scary.  In another way, it might be the scariest movie ever.

Lovelock: And in yet another way, it might be boring as dirt.

The living dead seem unable to form new memories.  They can only see the past.  Also, they’re starting to really scare people.

[Zombies gather in the night, bombs start going off all over the city… they all escape into a sewer?]

Lovelock: So… the zombies are ‘Fight Club’?

Starkwell: I don’t think it’s quite that…

Lovelock: His name is Robert Paulson.

Then the Zombie Kid jumps off his balcony to join the rest of the zombies and I think I heard Lovelock scream a little.

[The army shoots at a crowd of zombies.]

Starkwell: I know they’re basically terrorists at this point, but that still seems a little harsh.

Lovelock: Man, I don’t even know who I’m rooting for anymore.

Dead zombies are placed on tombstones, and then they vanish into thin air.  And with them, ALL POSSIBILITY of knowing what the Hell is going on in this movie and what any of it meant.  I guess the sewer zombies also vanished?  I really don’t know.  The end.
Documented by Kev D. and Posted at 20:30