Revolt of the Zombies. 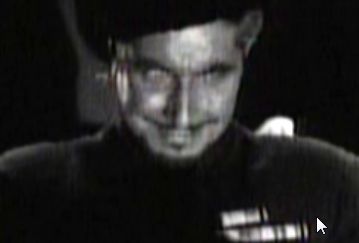 Victor Halperin followed up his classic and infamous and masterpiece “White Zombie” with this somewhat lackluster Lugosi-less cookie-cutter formulaic zombie snoozer.  Or at least, that’s what everyone seems to be saying about it.  Because Starkwell and Lovelock are always determined to make up their own minds, we find ourselves dipping back into one of those cruddy 50-in-1 movie packs to watch what certainly promises to be a piss poor print of a movie that probably didn’t look all that sharp to begin with.

[During World War I, apparently some crazy shit went down.]

Starkwell: I love how they kind of downplay war by making it sound like it’s just a series of strange events.

Lovelock: The general laughs a lot, considering that it is in fact war time.

Then there was a pretty sweet shot of “ORIENTAL” soldier zombies that charged a bunker, got shot repeatedly but wouldn’t die.  It was enough for Lovelock and Starkwell to agree to “give this one a shot” and look past the “super racism”.

Starkwell: Three actors walk in front of a painting led by a “native”… and PRESTO, we’ve established that they have arrived in Angkor.

Lovelock: They’re certainly getting a lot of use out of that bad painting.

Somehow they are managing to work a LOVE TRIANGLE sub-plot into a story about generals and archaeologists traveling to a mystical Oriental land during world wartime to discover the secret of the robotic zombie army.  Then they all end up wining and dining in 007 style tuxedoes at a wedding.

Starkwell: What does a wedding have to do with zombie armies in Angkor?

Lovelock: What does God want with a spaceship?

Lovelock and Starkwell are starting to think that this movie shot its zombie load way too early, with that cool zombie soldier scene in the first five minutes.  Since then, it has been a hodgepodge of messy and useless dialogue.

Lovelock: Is this “Revolt of the Zombies” or “Wedding Reception in Angkor”?

Starkwell: Can’t it be both?

Lovelock: It most certainly CAN'T.

[Archaeologist Dude Grumpyface explores a temple under the temple to find zombies.]

Lovelock: Totally where “Temple of Doom” got all of its ideas.

Anyways, the Black Magic General shares some zombie secrets with Archaeology Guy, but then Archaeology Guy kills him and starts controlling all of the other Generals, and apparently entire armies of soldiers, with his brain.

Lovelock: Thank God for that!  I couldn’t imagine how long this thing would be if they tried to explain everything.

Anyways, apparently World War I was just a side story.  The War was just a tool for Zombie Master to use to marry the girl he couldn’t have.  In the end, the girl asks him to give up his power, and she’d consider trying to love him.  So he does and his former zombie slaves rise up and kill him.  Then the film just ends.  I’m starting to think that she never intended on loving him at all.
Documented by Kev D. and Posted at 19:05