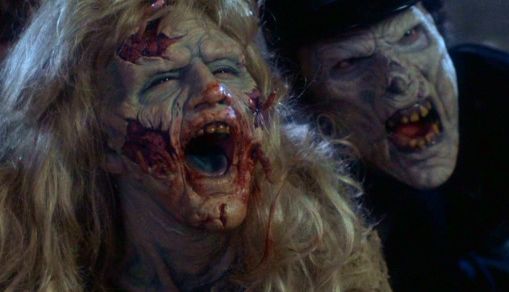 Some film series are great from first film to last.  Others take a couple of movies before they really veer off into the great unknown land of turds (think “Lethal Weapon” or the “Die Hard” films).  And others, like the “Re-Animator” films, took a massive nosedive IMMEDIATELY following the first film.  Given Dan O’Bannon’s excellent first film… I’m a little worried to see where this second installment will end up in the hands of writer-director Ken Wiederhorn.  The good news is, he was the guy that wrote and directed “Shock Waves”.  The bad news is he also later directed the “sequel in name only” to “Meatballs”.  Have at it, boys.

[Soldier driving truck full of Trioxin cans gets high and listens to bad music, when he hits a tiny pothole, canisters of Trioxin fly into the river.]

Starkwell: Don’t get me wrong, I get the notion of a wildly irresponsible army dude smoking weed while driving toxic materials… but you’d think they would have fastened the canisters in a little better… or maybe even, oh I don’t know, PUT A FUCKING BACK ON THE TRUCK!

Lovelock: Yeah but then we wouldn’t have a movie.  I, for one, applaud the shitty writing.

[Two bullies force a kid to join their club. While trying to beat him up near a cemetery, they find a canister and open it up.]

Starkwell and Lovelock were a little confused by the fact that two of the actors from the first movie are in this one as well, except that they aren’t playing the same characters… which makes sense since they died in the first one.  Anyways, now they’re stealing shit from graves to pawn for money.  The gas from the canister starts trickling into the cememtery.

[One of the Bully Kids is sick, from breathing in the Trioxin dust.]

Lovelock: Had better not all be centered around a zombie kid.

[Dorky Kid goes back to cemetery, runs into a tar man.]

It becomes pretty clear pretty quickly that this movie will have no problem being “goofy”, as we have already heard the now famous “brains!” a few times, and have witnessed all sorts of zombie physical comedy. Then the main girl, the lovely Brenda, punches through a zombies head, and there was much rejoicing in the crowd.

Lovelock: I’m willing to forgive the use of annoying ass kids if there is to be more face punches like that.

Starkwell: I’m willing to forgive the horrible soundtrack, over-the-top zaniness, and atrocious acting if… no… actually I’m not, not under any circumstances.

If the movie wasn’t trying SO HARD to be “funny” and “kerrrrazy”, it would probably be much better than it is.  As Starkwell said, a severed rotting zombie head speaking in a bad southern accent telling them to “get tha’ damn screwdriver outta my head” isn’t funny it’s “absolutely lame, in every way.”

Starkwell: It bugs me when a movie can’t make up its mind about what kind of zombies it has in it…

Lovelock: It always bugs me when you won’t shut up during the good scenes.

Starkwell: THESE are the good scenes?

Then one of the actors who was IN THE FIRST FILM says to the other “I feel like we’ve been here before, like it’s a dream I’ve had before”.  He did everything but wink at the camera.  There are some great zombie kills and the effects are decent enough.  I mean, actually, some of the effect work is really cheesy, but as Lovelock said, “it’s always nice to go back and see proper non-CGI zombies”.

Starkwell: Inconsistency number a million: if these zombies want to eat human brains, why would they be eating animals at the pet store?

Starkwell: And why do they run sometimes, but then most of the time shuffle around?

Lovelock: Because no one cares.  Especially not the writers.

Starkwell: Wait a minute… that one can drive a car?

[It turns out that the zombies can be stopped by electrocuting them, so the “heroes” round up all the zombies in town into a big puddle and shock them.]

Starkwell: We’re just supposed to buy that they managed to get all of the zombies there?

Starkwell: And that the eight year old kid can figure out how to drive stick in five seconds?  ANd reach the pedals in a huge truck?

Anyways, before it’s all over, we end up seeing a fight between Dorky Kid and Zombie Bully Kid, a super lame “Michael Jackon’s Thriller” joke, and another shot of bad southern accent severed head zombie from before… who’s there somehow.  Talking.  Ugh.
Documented by Kev D. and Posted at 22:00