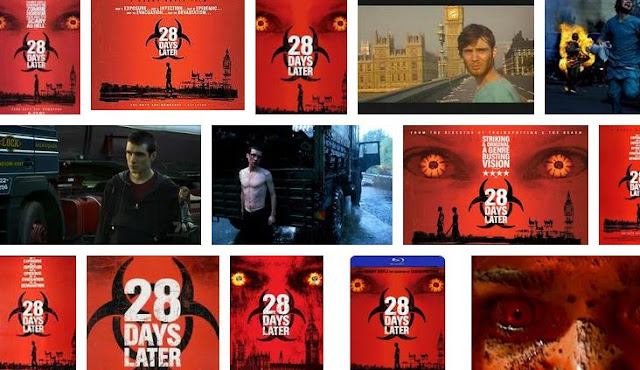 If Zack Snyder’s re-boot of “Dawn of the Dead” helped make zombies popular again, and push the zombie film back into “blockbuster” territory, thus paving the way for even the POSSIBILITY of popular pieces like “Zombieland” or the recent television show “The Walking Dead”, then it is safe to say that Danny Boyle (two years before the "Dawn" remake) made outbreaks cool and hip again, and reminded us all that these movies can and should be way epic.

[Monkey sits on a lab table.]

Starkwell: What are they doing to the monkey?  Oh I don’t like this.

[Activists break into lab, to free the EXPERIMENT MONKEYS.]

Lovelock: This might be the happiest I’ve ever been to see hippies.

[Doctor walks in on them, and warns them that the monkeys are infected.]

Then the newly freed RAGE monkey bites one of the activists, and she goes INSTANT RAGE.  And just like that… OUTBREAK!  After muttering “damn hippies”, I think Lovelock crapped his pants.  Then he did a jump kick and screamed “ZINGAYA! They’ve got THE BITE!” and danced while playing air guitar.  Starkwell was silently amazed.  At the movie.  He’s fully used to seeing Lovelock lose his shit (both literally and figuratively) at this point.

[Dude (we’ll find out later is named Jim) wakes up in an empty hospital.]

Starkwell: So far he’s keeping it together much better than I would be.

[Jim meets his first zombie… then his first swarm of zombies… some people help him get away.  He screams and runs… mostly asking “WHAT THE HELL IS GOING ON?”]

Starkwell: There we go.  That’s the reaction I was expecting.

Jim’s new friends, Mark and Selena, explain to him what is going on.  And now he really loses it.  Starkwell and Lovelock both sit quietly, totally smitten with this film and everything about it.

[Mark gets some blood on an open wound and Selena immediately hacks him to death with a machete.]

Lovelock: That’s why when someone asks me if I’m infected, I say no.

Starkwell: Yeah that's why... wait... why would that question come up? What kind of girls do you date?

Then Jim and Selena venture up a high-rise and meet Frank and his daughter Hannah.  We get more and more character development.  Starkwell was actually drooling.  Frank has heard a radio broadcast telling tales of a safe place guarded by military, so obviously they all decide to head out that way, by car.

[Car gets a flat, they change the tire JUST before they are totally swarmed by RAGE INFECTED ZOMBIES!]

Lovelock: Remind me to learn how to change a flat tire really fast.

Starkwell: Why?  In case you wind up IN the movie?  Or working in a pit crew?

[Grocery shopping montage! And then PICNIC!  And then horseys!]

Starkwell: Well, at least the horses made it.

Lovelock: What?  You can’t be serious.  Horses?  Damn hippy.

The gang continues on in their quest for the promised land.  They make it to the advertised roadblock, Frank gets infected and then shot by soldiers.  Lovelock and Starkwell were CLEARLY choked up.  The soldiers take Hannah, Selena and Jim to their secure compound.  It has security, and food, and hot water.

There’s a scene where the leader soldier takes Jim on a tour and shows him their captive zombie.  He pukes brown blood and shit, and it is super gross.  Lovelock totally stopped eating his sandwich.  The soldiers are clearly not good dudes.  Jim finds out that Leader Soldier promised his men “WOMEN”.  Before Jim has a chance to take off and save the girls, he gets knocked out.  They take him out to the woods to execute him, but Jim gets away from them.

[A crazed Jim makes his way back into their little camp, kills the fuck out of the soldiers, and saves Hannah and Selena.]

Lovelock: “Rambo was a pussy”.

Starkwell: Dude? “Tango and Cash”? During this beautiful movie? Please.

Lovelock: "Why don't you just shove a leash up my ass?!"

So before he went nuts, Jim saw a plane in the sky… which implies that maybe the other soldier was right, and that the infection is quarantined to the UK.  Hannah, Selena and Jim find a place to hide out, and they wait… to be rescued.  It’s been 28 days and the infected are starving… COuld this be?  A zombie film with a happy ending? Thank heavens for films like this.
Documented by Kev D. and Posted at 20:00