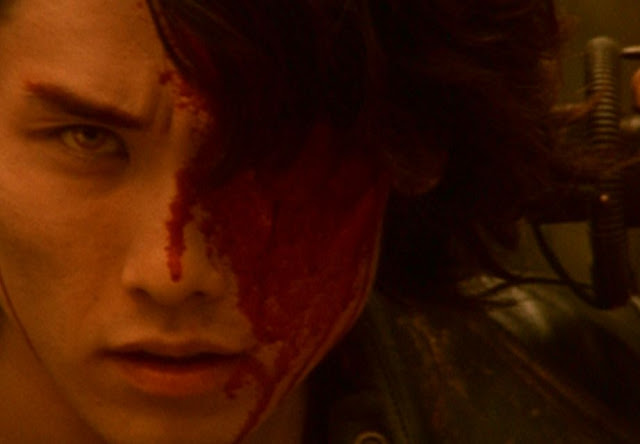 Although a lot of the more recent zombie entries from Japan have left a sour taste in the mouths of Zombie Hall’s two resident aficionados, “Versus” promises to beat the crap out of that sour taste and explode it to infinity and beyond.  Are they ready for “Versus”?  Is anyone ever REALLY ready for “Versus”.  Alright, let’s get this show on the road.

[Text tells the story of the “Forest of Resurrection”, really fast.]

Lovelock: Hold on… what was that thing about gates?  Wait... go back.

Starkwell: I think it was four hundred and forty-four something…

Starkwell: Can we do it in slow-mo?

[They went back and read the whole thing.  It still made no sense.]

Then there’s a swordfight in olden Japan that ends with a dude being cut in half and another dude that looks like Raiden.  And then FLASH FORWARD to present day, and two convicts are running through the woods.  I assume these are the same woods known as… THE “Forest of Resurrection”.

Starkwell: I’m starting to think the director really likes those spinning shots that circle around people.

One of the cons is a mega tough guy.  From here on out, Lovelock and Starkwell will refer to him as Stone Face.  Stone Face and his partner meet up with some gangsters that work for the people they work for, and for some reason they’ve brought a girl.

Starkwell: These guys all follow orders pretty blindly, especially ones that make no sense.  “We are to meet you here, and bring this girl with us.  That is what we are told.”

[Stone Face tells them to let go of the girl, they refuse, so they FIGHT.  One dude gets shot and dies.  Then Mexican Standoff.]

Lovelock: What movie would be complete without a Mexican Standoff?

Lovelock: But check out that spinning camera shot!

[They show a guy with a suitcase in the distance, and then the dead guy gets up and starts attacking.  Stone Face’s partner dies, gets up as a zombie.]

Lovelock: We must all be quiet now, and allow ourselves to play air guitar while we enjoy this scene.

Starkwell: I think I’ll do a roundhouse kick if that’s okay with you.

While they were rocking out to the movie, Stone Face got away, with the girl, and the wacky gangsters set out to find them, deep in THE FOREST OF RESURRECTION.

[Stone Face puts on a black leather trench coat he found on a dead guy in the woods.  Short guitar solo plays.]

Lovelock: Wait, was that guitar solo just in my brain or… ?? Did you hear that too?

[Stone Face attacks the gangster wearing a vest, then punches the girl in the face.]

Starkwell: Well… that’s one way to make her butt out.

Lovelock: Look out!  Yakuza member Vesty McPonytail is back up!

One of the gangsters realizes that these woods are where they’ve executed a lot of people, which means, thankfully, many many zombies.  Lovelock said he was so excited that a drop of pee came out.

[The zombies use guns.  The action is insane.]

Lovelock: It’s everything good that's ever been ever put into a movie put into one movie. WOAH! HE KICKED HIS HEAD OFF!

Starkwell: I don’t know dude, I mean... zombies with guns?

Lovelock: No.  No, I won’t let you take this joy away from me.  I don’t think I’ve ever been this happy.

Starkwell: But, nothing is happening…

Anyways, outside of random slow-mo shots of Stone Face staring at the girl, the action is pretty relentless.

Lovelock: Cartwheels are always the best way to dodge machine gun fire.  I really need to learn how to do a cartwheel.

[Now we’re introduced to the cops that Stone Face originally escaped from.]

[Stone Face and The Girl can’t remember anything that happened before they arrived in the woods.]

Starkwell: Well, you’re not alone.  Even the characters IN the movie are confused.

[The Big Boss shows up, and one of his subordinates tries to ambush him with a new crew of people.]

Lovelock: Where the hell did all of them come from?

Starkwell: From the looks of it, I’d say “The Matrix”.

Big Boss has super powers, he rips the heart out of one guy and takes a bite out of it.  Then he gets all rapey with one of the girls, takes a bite out of her neck and offers her eternal life, like a vampire.  This only further confused Starkwell and Lovelock, as they tried to figure shit out.

[Dude with CRAZY RED HAIR flies into the screen and wants to fight Stone Face.  Before they start, he knocks the girl out.]

Starkwell: I don’t really get why he would need to knock her out…

Starkwell: Dude, that was not okay…

Sometimes when Stone Face does stuff, guitar solos play.  Lovelock claims that the director can read his mind.  Then Big Boss punches through a guys head and Lovelock started to cry a little.  When Starkwell asked him what was up he simply sobbed “I’m just so happy!”

Stone Face and Big Boss end up fighting a field somewhere, and Big Boss explains that he needs to sacrifice the girl to open the gates of Hell, basically.  And that he is Stone Face’s brother.  And that he’s been waiting five hundred years for today.

Starkwell: Stone Face is taking all of this news rather well.

Lovelock: Nothing can shock Stone Face I tells ya… nothing.

Starkwell: The girl is wearing white… how is she still so clean?  I mean even without the blood and zombies and stuff, just, dirt from the woods?

Stone Face is resurrected with crazy super powers and then shit gets even more action packed and IN YOUR FACE.  I don’t hear Lovelock complaining.  However, Starkwell keeps rolling his eyes.  I assume that’s not a rave review.

Starkwell: Basically you could sum up this movie in five minutes.

Lovelock: But then how would you fit in all of the fights?

Starkwell: I’m not too concerned about that.

[Stone Face explodes a guy with a huge gun.]

Lovelock: BOOM! Let’s see you work that into your five minute version.

Anyways, the movie is way too long, especially when there’s this much slow-motion added in for effect.  They kind of explain everything, but it’s a hot mess, what with the whole flashbacks and flashforwards to some kind of post apocalyptic future society of bald mutant vampires or something.  Comedy, action, melodrama romance, sci-fi… SAMURAI SWORDFIGHT TO THE MAXXXXXX!!!!! Judging by Lovelock’s grin though, I don’t think he has any issue with any of this.  Starkwell, well, that’s a different story.

Lovelock: I gotta say, that those 99 years were not kind to the forest.

Starkwell: What’s with the “Predator” lights?