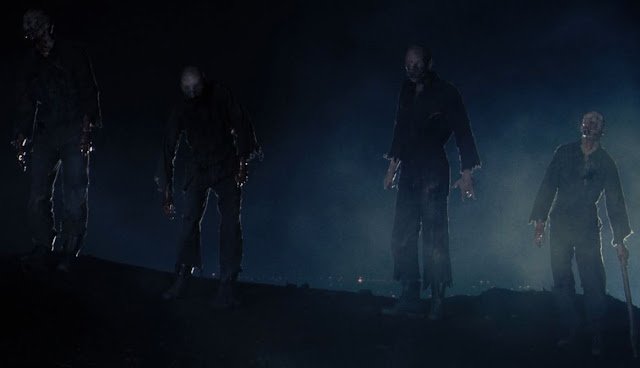 A French film about crazy backwoods type of horror, 2010’s “La Meute” sets out to reinforce the notion that hitchhiking is really fucking stupid.  Picking them up?  Stupid.  Being one?  Stupid.  That’s actually probably not at all what it is setting out to do.  Whatever it is trying to do will soon be discovered and picked apart by everyone’s favorite (read: my favorite) zombie enthusiasts, Starkwell and Lovelock.  Luckily, their fluency in French will allow me to avoid having to hear Lovelock bitch about having to read subtitles.

[Girl picks up Hitchhiker, she warns him that if he takes his penis out, she’ll hammer him.]

Starkwell: Good that she is setting up the ground rules right off the bat. That’s definitely the right line to open with when picking up a hitchhiker… “NO WHIPPING IT OUT, OR ELSE.”

Lovelock: And then five minutes later, she falls asleep and lets him drive?

The main girl, Charlotte, clearly has issues.  Anyways, Charlotte and Hitchhiker stop at some sketchy diner.  Some biker gang followed her there and tell her that they are going to sodomize her.  And him… apparently…

[Right before the bikers perform the ass rape(s), the owner of the diner saves the day.]

Lovelock: Remind me to never go to France.

Starkwell: The owner kind of looks like Roseanne.  Except, you know, French and inbred.

The atmosphere is pretty tense in here.  Charlotte lost her Hitchhiker friend, who just seems to have disappeared in the diner bathroom.  Then she meets an old guy wearing an “I Fuck on the First Date” t-shirt.  Anyways, French Roseanne is fucking scary, with her rubber gloves, spying on Charlotte and First Date Guy from behind her curtains.  Lovelock and Starkwell were very quiet, anticipating that scary and possibly disturbing things were going to start happening.

[Charlotte waits for French Roseanne to leave, and then she breaks into the diner.]

Starkwell: Anyone who picks up hitchhikers, in what I can only assume is the ass rape area of rural France, probably doesn’t think much about consequences.

Obviously French Roseanne catches her, knocks her out, puts her in a cage, and then we find out that the Hitchhiker is HER SON!  Starkwell assumes that this will be the first of many twists.

[French Roseanne spikes a hole into a dude’s head, kills him, bleeds him into a bucket, and forces Charlotte to watch the hole thing.]

Lovelock: That’s why I don’t pick up hitch hikers.

Starkwell: That is a solid reason not to.

Lovelock: Well also, like, what if, LIKE SOME ANNOYING PEOPLE, they want to listen to some bullshit radio station, or like, talk about stuff?  Man, my car, my rules.

Starkwell: One fucking time I changed the channel, dude.  One time I talk about work.

Lovelock: MY CAR.  MY RULES.

Anyways, Charlotte and her new friend Asian Cowboy try to escape.  French Roseanne and Hitchhiker catch her and proceed to torture her and brand her like a piece of cattle.  That stopped their argument about car radios, and returned their focus to the film.  They sat on the edge of their seats.

Lovelock: Help me Obi-Wan Kanobi, you’re my only hope.

Lovelock: Is it the first date already?  Boom!

Old Man is a cop!  He seems to be slowly figuring it out.  Anyways, when she isn’t sawing up human limbs, French Roseanne seems to be pumping some weird black blood liquid into Asian Cowboy and Charlotte.  Until they figure out what the shit is going on, I don’t foresee Lovelock or Starkwell saying a whole lot.  Lovelock let out at least one or two nervous farts though, and one loud gasp.  French Roseanne then hangs Asian Cowboy and Charlotte up outside their trailer, and cuts Charlotte’s foot.  Her blood touches the ground and…

[Zombies THINGS rise out of the ground.]

Lovelock: WHAT THE FUCK IS WRONG WITH THEIR FACES WAA AAAA AAA AA AA AAA A Aaaaaaaaaa aaaaahhhh!!!!!!!!!!!!!

[I haven’t seen them react like that in a while.]

Charlotte survives this wave of torture, and Hitchhiker proceeds to semi-explain that the zombies are dead miners, that have come back to life and need blood, or… something.

Lovelock: So much for Obi-Wan.

[Wait, he was faking that he was drugged and unconscious, he punches Roseanne and throws her in her own cage, frees Charlotte.]

Lovelock: I bet he TOTALLY fucks on the first date.

Starkwell: NOW’S NOT THE TIME FOR JOKES!

[Starkwell then proceeded to slap Lovelock and told him to pay attention.]

Turns out French Roseanne isn’t dead.  She kills Old Man Asskicker and Starkwell let out a shockingly loud “NO”.  At this point, the movie starts to get a bit more confusing, and make less sense.  Charlotte and Hitchhiker have just joined forces, and now are joining forces with the Ass Rape Biker Gang from the beginning.  All together in a small cabin, they prepare for a stand off with French Roseanne and her army of Bloodsucking Zombie Miners.

[Eventually, Charlotte is surrounded by zombies, in a field.]

Lovelock: I think I’ve aged ten years in the last ten minutes.  FUCK CHARLOTTE GET UP!

Starkwell: Umm… is she dying or having an orgasm?

Cut to Charlotte, who has replaced French Roseanne as the Queen of the Undead a.k.a. owner of the shitty diner?  And she’s pregnant?  Were they sexing her through biting her or… ?  And… The end.  Wait no, she wakes up, and she’s hung up where she was hung up before with Asian Cowboy, only now she’s missing a leg.  So… ummm… wait what?  FADE TO BLACK ROLL CREDITS.  Confused, scared and a little sick to his stomach, Lovelock runs to take a dump while Starkwell tries to figure out what the Hell just happened.
Documented by Kev D. and Posted at 07:45