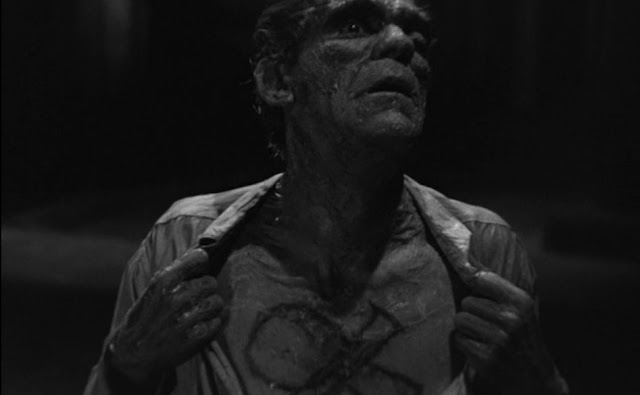 Shortly after his turn as Frankenstein’s Monster, Boris Karloff played a zombie.  Well, it was a “Ghoul” I guess.  But considering it was right around the time of “White Zombie”, this was a highly original premise.  Karloff played walking corpses through much of the 30s and 40s I guess… As for this film, apparently it was basically lost for decades, and only as recently as 2003 was it actually PROPERLY released in its uncut restored version.  I’m getting that off of TEH INTARWEBS though, so honestly, who knows?  Starkwell and Lovelock seem as ready as ever.

Starkwell: Is it still AS racist in black and white?

Lovelock: Had racism been invented yet?

Starkwell: Yeah, you know, I’m pretty sure it had.

The dialogue, acting, lighting, cinematography, set design and direction are actually quite captivating and totally top notch.  It turns out that Professor Morlant, Boris Karloff, has bought some sort of Egyptian artifact, hoping that it will grant him immortality, as he is on his death bed.

[Morlant dies and is buried in this crazy tomb with the Secret Jewel.  Then his servant guy lights the torches INSIDE the tomb, which locks from the inside…]

Lovelock: That tomb is off the charts.  Remind me to get a tomb like that.

Starkwell: Are you planning on coming back from the dead?

Lovelock: I sure as heck hope so.

Starkwell: This movie is visually stunning.

As the story continued to unfold, Starkwell and Lovelock sat quietly mesmerized.  Occasionally Lovelock mocked the British expressions… he said “guv’nah” more times than Starkwell could handle, resulting in a glorious “SHUT UP” launched at Lovelock.

[Introducing Betty and Ralph, Morlant was their “rich wacky uncle”.]

Starkwell: Best line ever… “No, we don’t like him very much.”

Lovelock: I think the follow-up from Betty’s servant was even better… “Oh… we don’t?  Why don’t we?”

Lovelock is starting to feel like the story is a bit slow moving, and is showing signs of boredom.  I think he is just desperately waiting for Undead Morlant to make his triumphant entrance.  Hopefully the slow buildup doesn’t hype it up so much that his eventual resurrection ends up being a letdown.  Starkwell, on the other hand, loves the deliberate pace.  I know because he keeps saying out loud “I love the deliberate pace”.

Lovelock: Everything that Betty’s assistant does is fucking hilarious.  This is a rare instance where the comic relief is not only welcome, but totally God damn effective.

[Starkwell agreed, and nodded his head so hard he gave himself whiplash.]

[Arab dude from the beginning is back, he has noticeably less dark make-up on his face this time around.  Betty’s servant hits on him and makes him a sandwich.]

Starkwell: Looks like the studio liked it less, since they definitely toned it down.

Lovelock: Can I interrupt the sandwich making Arab love fest for a moment to ask WHERE THE FUCK IS THE GHOUL!?!?

Starkwell: You may not.  Also, didn’t the servant take the Secret Jewel anyways… so how could Morlant even rise from the grave?

Morlant rises from his tomb, and his Servant Guy let’s out the most hilarious sounding GASP that Lovelock and Starkwell have ever heard.  They rewound and watched it over and over again.  Honestly, at least ten times…  Then he choked a dude, and Lovelock did a cartwheel.

[Betty’s Assistant says “that’s the last time I try to make coffee in a strange house” kind of randomly.]

Starkwell: Well, no, you’d say “And that’s why I never make coffee in a strange house.”

Lovelock: Well, also… “I’m the guest.  Fuck you, you make the coffee.”

[Morlant eventually arrives at his old house and tries to find the Jewel.]

Starkwell: I’m not sure if he’s looking for the Jewel or just going around choking people.

Lovelock: He keeps on letting them live!  Choke harder!

In one of the final scenes, they doubled down on the amount of make-up they put on Arab guy’s face.  It’s probably the only issue that Starkwell has with this movie.  Lovelock’s major issue is, as he has stated “I’m mega bored.”

[Ralph throws a vase at the bad guy’s head.]

Starkwell: I didn’t mean… I meant… I hate you.

[Turns out Morlant was buried alive?]

Lovelock: Wait… he wasn’t a ghoul OR a zombie?  I feel cheated.

Starkwell: It’s a nice twist though…

Starkwell: They JUST said that he wasn’t actually-

Eventually fire is set to the tomb, with Ralph and Betty still inside!  They eventually escape.  Then it ends as abruptly as most movies from this era do.

[Starkwell and Lovelock imagine how the editing sessions went.]

Starkwell: “Show them exit the tomb, then immediately cut to a black screen with the words ‘the end’, and that’s a wrap.”

Lovelock: "Should we let them say anything?"