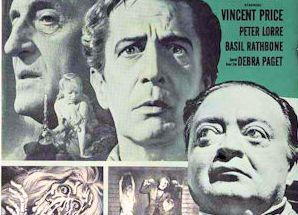 Once again I have taken on the task of showing an anthology film to Starkwell and Lovelock.  As is the case with other anthology films, I need to delicately explain to Lovelock that not ALL of the segments will necessarily deal with zombies.  Interestingly, this Roger Corman picture not only features Vincent Price, but was partly written by Richard Matheson, who, notably, wrote “I Am Legend” upon which a bunch of movies have been based.  These facts were enough to reassure Lovelock in the face of a potential lack of zombieness.

[Opens with a heartbeat, a flashing image of a heart and Vincent Price’s creepy voice.]

Lovelock: They could show ninety minutes of this and it would be one of the more frightening films I’ve ever seen.

The first segment is “Morella”.  Vincent Price successfully plays an old bitter man who blames his daughter for the death of his wife, who died months after giving birth.

[Lenora finds her dead mother who apparently Price has been keeping all this time, in a bed, decomposing and gross.]

Lovelock: I’ll be MORE impressed if she gets up and walks.

Starkwell: There is more to movies than the walking dead, you know…

Price admits that he wanted to throw Lenora out the window when she was a baby and Lovelock was like “dude that’s fucked.”

[Ghost of Morella possesses Lenora, chokes Price, and the house burns down.]

[Old Drunk threatens to kick the head in of a black cat, destroys the house looking for hidden money.]

Lovelock: Man, fuck this guy.  What did the kitty ever do to you?

[Old Drunk wakes up to a purring cat on his chest, he throws him!]

Lovelock: CLEARLY Price was hoping to get the Academy Award for Best Moustache, 1962.

Lovelock: It should be.

Lovelock: Dude, I think you’re wrong… that looks real.  Besides, who else could compete with him?  It would be years before Burt Reynolds would win every year.

[Montresor chains up Fortunato and his wife and seals them in the house’s crawl space behind a brick wall.]

Starkwell: I might not think he deserves the Moustache Oscar, but Vincent Price deserves the Lifetime Achievement Award for performing “laugh-to-cry”s better than anyone else ever.

[Drunk at the bar Montresor admits he killed his wife.]

[Dream sequence wherein Fortunato and Wife break through the brick wall, rip off Montresor’s head and play catch with it.]

Anyways the cops come to investigate the house, and it turns out that Montresor sealed the Black Cat behind the wall, so, obviously, the cops find out what he did.

The third segment is “The Case of M. Valdemar”.  Price plays a dying M. Valdemar who wants to be hypnotized by Dr. James so that he won’t feel any pain as he approaches his imminent death, from some incurable disease.

Starkwell: See, now his moustache is all grey and flaky… I really think it may be a fake.

Lovelock: Whatever dude.  Groucho Marx won a whole slew of moustache awards in his day and his was painted on.  I think there are different criteria that they judge upon.

Starkwell: You realize that you’ve created a whole alternate reality, a fantasy if you will, in which there is an annual and quite prestigious Moustache Award given out to entertainers?

Lovelock: If that’s wrong, I don’t wanna be right.

Anyways, Valdemar is hypnotized as he dies, and seems to be stuck in between life and death.  The Hypnotist tries to use his ‘control’ over Valdemar to get Valdemar’s young and sexy wife to make the sex with him.  But then a melty and decomposing Valdemar rises from the bed and kills the Hypnotist.  Starkwell stands up to applaud while Lovelock simultaneously gets up to do a jump kick.  He ends up kicking Starkwell in the head and falls on the ground and hits hit head on the coffee table.  With the two unconscious on the floor… I run away.
Documented by Kev D. and Posted at 09:35