Otto; or Up with Dead People. 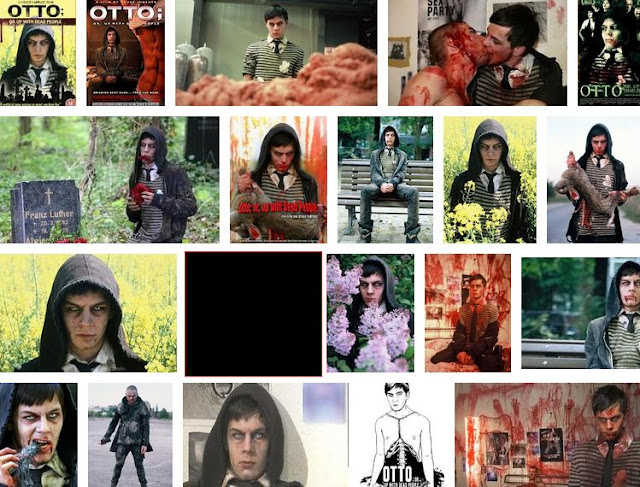 I probably shouldn’t even attempt to show Starkwell and Lovelock a zombie film directed by the artsy Canadian gay-porn director Bruce LaBruce.  But hopefully by not telling them that’s what it is, they’ll venture far enough into it to be truly shocked and give it a chance. “Otto” is actually a half German half Canadian film.  The intro starts and involves epic music, shots of zombie Otto, stock footage of explosions, weird hand drawn sketches and people shooting a film.

[Otto rises from grave, narrator explains the evolution of zombies.  Talks about how zombies came about because of war and the hostility of humans, in general.]

Starkwell: I like the style so far, this is an interesting intro and take on the whole thing…

[Otto eats a cat in the graveyards.]

Otto has a super thick German accent.  He talks about his hardships as a zombie.  I should note, that when we see anything from ‘Otto perspective’ it looks all pink and shiny.  The soundtrack is full of noise and distortion, and while Otto eats some roadkill, some music plays that sounds like Yoko Ono on acid underwater with harps for hands.  Lovelock and Starkwell are starting to freak out a little.

[Suddenly, there’s another title flashed on the screen “Up With Dead People” and it’s in black and white.]

Starkwell: Is this a movie within a movie, or what are we seeing?

Lovelock: This movie is trying so hard to be weird that my brain hurts a little.  Also, fuck you, movie.

Honestly, this is the closest I’ve seen to ACTUALLY reproducing how shocking old Grindhouse Cult Shock-Trash were back in the seventies.  But that doesn’t mean they have to like it.  Or watch it.  Bizarre.
Documented by Kev D. and Posted at 08:44