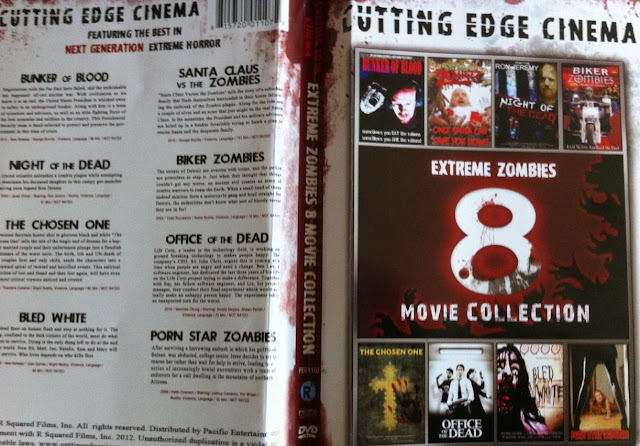 So I bought a collection of 8 EXTREME ZOMBIE MOVIES.  It’s a release from something called “Cutting Edge Cinema”?  I can tell you, nothing here is cutting edge.  I paid about 6 bucks for the set, which is about 75 cents a movie.  I can’t help but still feel like I’ve been swindled.  Although, I did get my money’s worth out of forcing them upon Lovelock and Starkwell, I guess.

I guess it was a bit naïve to think that they would have watched this one longer than five minutes.

Starkwell: Why is it black and white?

Lovelock: Was this thing shot on an iPhone?

Starkwell: If you knew the guys making this, would it be fun to watch?

Lovelock: Probably not, but since we don’t ESPECIALLY not.

There are a lot of booby and ass and boner jokes.  If you’re into that kind of a thing THIS SHOULD STILL BE AVOIDED.

This movie is apparently about a family being hauled up in a house during the holidays and somehow Santa Claus and some Elves are there.  It’s over an hour and forty minutes.  Starkwell and Lovelock made it through one, and then fast forwarded for a while before calling it.

Starkwell: I can’t help but feel like this was just some actual family’s way to spend a few days.

Lovelock: It should be noted that no one in the family can act, or write or anything ever.

This movie ALMOST gets bad enough to become funny.  But it’s far too long and boring and awful for that to ever be a possibility.  The zombies look like they’d be third or fourth runner up at a lame Halloween costume contest at a local dive bar full of townies.

The quality of the picture is WORSE than any DVD I’ve ever seen ever.  I’m sure the movie would have been insufferable enough without that.  But here we are.

Sometime in the middle of a long conversation between two of the characters about how fifteen year old girls are hot and the director showing an actual close-up on three asses of girls that looked no older than fourteen, Starkwell and Lovelock stopped.  I’m sure there would eventually actually be some zombies, but they weren’t going to hang around and find out.  And then at the end there are about eight minutes of credits… it really makes you wonder how it took that many people to make this piece of shit.  This is another one that could have been "funny bad" if it weren't so slow moving awful and the worst.

Lovelock: I will say this… It looks like the camcorder they used for this one had like, eight or nine features.

Starkwell: I love that they film trees without leaves to establish that it’s a WASTELAND…

Taking on this huge of a premise on no budget is probably foolish.  After the main characters decided to eat another human, Starkwell was actually intrigued… but still, he and Lovelock left.  The box says this movie won “awards”.  I guess the awards it gets from Starkwell and Lovelock are “closest to actually being watched”, and “if it had any budget, it would still be bad, but much more watchable than the others on this shitty DVD set”.

Unlike the first four films, this one is actually filmed in WIDESCREEN, and looks like it may have even been filmed with cameras that cost more than "somewhere between fifty bucks and cellphone".  I think Lovelock and Starkwell were also a bit kinder to this one since it revolves around Software Engineers…

Starkwell: A movie made for nerds, by nerds?

Starkwell: It’s clear that they filmed this in an actual office…

Lovelock: Seriously, I hope their boss doesn’t see this.

Starkwell: I wouldn’t be worried about that.

Lovelock: Maybe the boss at the place is the one in charge of the filming… “Threat Level Midnight” style.

Starkwell: They clearly don’t think much of marketing people.

Starkwell: Unless they work at Google.

Lovelock: How about we quit while we’re ahead.  What do you think?

The rest of the movie was whatever.  This is an even better example of “if those were dudes at my work, and it was filmed at my office, this would be watchable.  Still bad, but fun to watch anyways.”  And it was much more competently made than the others in this set.  Probably because they’re all software engineers.  But… neither Lovelock nor Starkwell works with or knows these people.  Sooooo…

This is actually made by the same people as “Santa Claus vs. the Zombies”, and directed by the same guy.  Unfortunately for this movie, as soon as Lovelock and Starkwell saw that name go up on the screen.  They actually pressed stop, so they really didn’t have much to say.

Starkwell: If you like “Santa Claus vs. the Zombies” then you’ll probably love “Bunker of Blood”.

Lovelock: If you like “Santa Claus vs. the Zombies” then it’s probably time to give up.  On life.

Starkwell: You think at the end of most of these scenes the actors were like “nailed it!”?

Lovelock: Man, I hope so.

It would have been nice if they had even just made it through ten minutes of this one.  Some of the opening scenes were COMICALLY bad.  Especially the slow motion shots.  At least it’s not a sequel to “Claus”.  There are most of the same actors, though.

Not to be confused with an ‘Asylum’ movie of the same name released a few years earlier (also, according to the opening credits, this one is actually called “Night of the Dead – Friday the 13th”), this one has Ron Jeremy in it.  It starts suddenly without setting up anything.  Basically people are making out in a tropical forest, and the dude runs into his ex girlfriend and then people in HASMAT suits start following them with axes.  Lovelock and Starkwell actually got through more of this one, but only because they left it playing in the background while they made and ate sandwiches.

[Starkwell’s mouth was full of sandwich.  I believe he was commenting on the fact that most houses’ Halloween decorations are more convincing than the special effects in this film, thus far.]

Once Starkwell and Lovelock finished eating they left the room.  I assumed that meant they wanted me to stop it.  I think Ron Jeremy’s job was to look disgusting as always and provide the film makers with girls that would show their boobies and have no problem putting their face in kitty litter.

After a much needed and deserved break, they came back to try to finish the set with another film in black and white for absolutely no reason.

Lovelock: Even though this one seems to have better acting than the others, HOLY FUCKBALLS THIS IS BORING.

Starkwell: You're just saying that because it's an old guy, and you always think old guys and British people are good actors.

Lovelock: Dude, totally.  And old British people? Forget about it!

Lovelock: Seriously, what the shit is even happening?

Slow moving doesn’t even begin to describe this one.  I’ve seen carpet commercials with more story.  Before I let them leave, I told them I had a BONUS MOVIE for them.

This one wasn’t actually in the set.  It’s more of a bonus movie in that I feel it fits in well here.  I know one of the actors in the movie so I’ve edited Starkwell and Lovelock’s brief conversation to an even briefer one.  I might be paraphrasing.  I should mention that they sat through much more of this one than the eight from the set, and it is generally a better movie.  But…Still...

Starkwell: That one actor in particular steals the show.

[Guess who he's talking about.]

So it is true that knowing someone in the movie somehow makes the movie more fun to watch!  Well, at least for the scenes with that person.  While this does give some perspective and assistance in answering the question “who would actually watch and enjoy these movies?”, it doesn’t change the fact that one answer is a resounding NOT LOVELOCK AND NOT STARKWELL.
Documented by Kev D. and Posted at 08:45