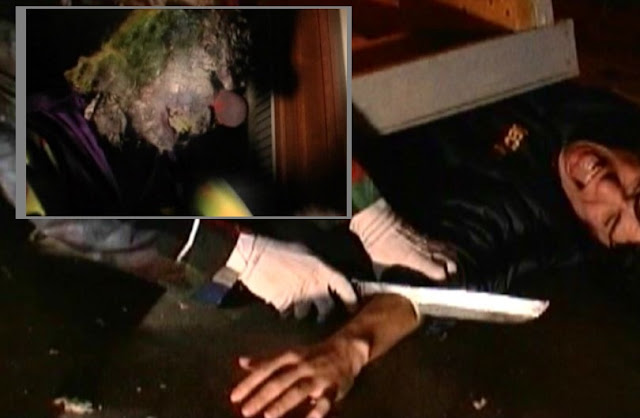 Well, coulrophobia, or the FEAR OF CLOWNS, seems to be relatively common.  Personally I think most people are full of shit and just saying that they are afraid of clowns, but that is neither here nor there.  If clowns were actually some kind of undead demons trying to kill me, well, yeah, I’d be afraid of clowns.  I don’t know how much this movie owes to “Killer Clowns”, but I’ll let Starkwell and Lovelock find out.

[Some Dudes prepare for a hurricane.]

Starkwell: Is it necessary to show him boarding up every window, while the other guy does a puzzle?

After nearly twenty-five minutes, all we’ve really established is that there is a hurricane coming and that fifty years ago a bunch of clowns died in a previous hurricane.  That’s about it.  There are some characters, but I can’t see that anyone could possibly give a shit about them.

[Clowns slowly rise up out of the ocean floor.]

Lovelock: Admittedly, that was kind of creepy.

Starkwell: I feel like using clowns is a bit of a cop out… it’s such an easy way to make shit creepy.

Lovelock: This movie needs more of stuff like in this scene, and less of everything else in this movie.

[Girl with huge boobs is attacked by zombie clowns.]

Starkwell: I’ll bet they hired her for her acting.

Lovelock: I kind of wish they’d stop interrupting the shots of decomposing clowns looking gross and scary with stock footage of hurricanes.

Starkwell: Seriously, is this a movie about zombie clowns or a documentary about hurricanes?

They show hurricane stock footage between every other line of dialogue.

Starkwell: Nobody screams in this movie.

Lovelock: I can tell you, if I came face to face with a zombie clown holding a bloody hammer, I’d probably scream, and maybe pee or poo a little.

Starkwell: Maybe the whole thing was filmed in an apartment complex and they were trying to keep the noise down.

Lovelock: That, or they were worried that if they did scream, a neighbor would call the cops.

[Cut back to Wheelchair Guy in house, clowns try to get into his house.]

Lovelock: Please, for the love of God, SEND IN THE CLOWNS.

Starkwell: Something needs to happen.

[Wheelchair Guy drives a drill into a clown and it IMMEDIATELY cuts to stock footage of a hurricane.]

Starkwell: I can’t explain it... I feel I need to stay.

So there are two other characters that are travelling serial killers or something, and, yeah well, this shit is crazy boring.  Where are the clowns?

The main focus of the story seems to be the hurricane and the travelling killers.  The Killers break into a woman’s house and tie her up, she explains the clown story to them.  This is the second time that we, the audience, have heard this story.  THE ENTIRE STORY.

Starkwell:  They’ve spent more time talking about the clowns than they have showing the clowns.

Lovelock: SEND IN THE CLOWNS.

Starkwell: The actors are being so quiet all the time... was this filmed in a library?

Everything in this movie is needlessly drawn out.  Even the shot of the clown ripping out a girl’s eyeball and eating it is RUINED by the slow pace.  If they were trying to make an homage to other deliberately paced aquatic based zombie films like "Zombie Lake" or "Oasis", mission accomplished.  I just realized that both Starkwell and Lovelock have fallen asleep.  No one in this movie ever looks scared.  In fact they never look anything.  It is the most wooden acting you will ever see.

Starkwell: Is that a clown or Skeletor?

Starkwell: But nothing is happening.

[Zombie clown cuts off a guy’s arm and eats it.  This takes five minutes.]

Lovelock: How come we can hear the chewing sounds so loudly but not his screams?

Starkwell: Because “fuck you audience”, that’s why.

Anyways, there are some genuinely creepy moments in this film, but they come in at the eighty minute mark of a ninety minute movie, and even then, they are seriously dragged out.  How much chewing and slurping do we really need to hear?  As stupid as the premise is, if it had been executed with more competence, I think it could have been one to remember.  As it stands, it is one to forget.
Documented by Kev D. and Posted at 07:45