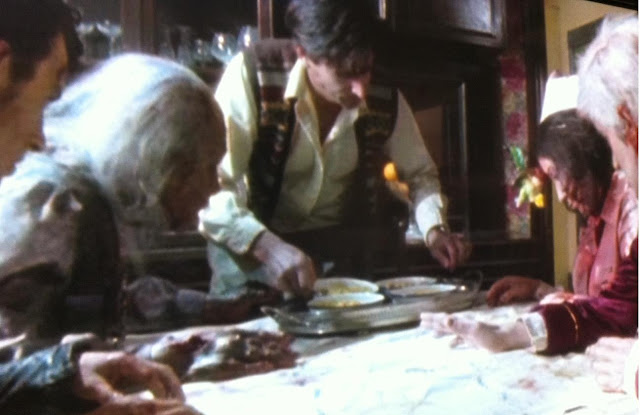 The nineties didn’t offer much to the horror genre at all, let alone to the zombie genre itself.  Luckily one offering was Peter Jackson’s “Braindead”, or as I’ve always known it, “Dead Alive”.  If you haven’t seen this movie, you should probably stop reading this and run to go watch it.  It’s that good.  Unfortunately, much like “Meet the Feebles”, there isn’t really a very nice and luxurious DVD print of the film yet.  That doesn’t really matter since, ANY version of this movie is better than NO version of this movie.  However, I believe that there is a longer, uncut version of this film that I have still never seen.  Bullshit.

[Zoo official steals RAT MONKEY, gets bitten on hand, arm and face by said RAT MONKEY.  Local guides cut off his hand, then arm, then face.]

Starkwell: Wait, so who’s going to bring it back to the zoo?

[Locals sell RAT MONKEY to zoo people, I assume, as they load it onto a plane.]

Lovelock: Does that answer your question?

Starkwell: I love that, although they feel bad about sending ZINGAYA off to the rest of the world, that one guy looks SO HAPPY to get paid.

Starkwell: I’m not sure what period this is supposed to be… it’s definitely not present day, but at the same time, feels timeless.

[At the zoo, Rat Monkey punches a regular monkey, rips its arm off, and eats it.]

[Lionel’s Mom spies on Lionel and Pequita and is bitten by Rat Monkey.  Mom squashes Rat Monkey’s head with her heel.]

Lovelock: ZINGAYA!  She’s got… THE BITE.  That makes me so happy.

Starkwell: It’s pretty obvious who the real enemy is.

Lionel and Pequita spend the night together, and Mother’s infection worsens.  They show the oozing wound, and it is already clear to Starkwell and Lovelock that this movie is going to be intensely disgusting.  As Mother’s condition worsens exponentially, her speech is slurred, her skin and body parts start falling off and apart, some guests arrive.

[Mother’s wound oozes into one guests custard, her ear falls into her own.  The guest eats the ooze, Mother eats her ear.]

[Starkwell didn’t say anything, as he left to go vomit.  In an unexpected twist, he asked us to pause it while he went to vomit, not wanting to miss any of it.]

Then Mother eats Pequita’s dog, falls down the stairs, dies.  Then she rises and goes FULL zombie, and rips off the nurse’s head.  I can’t possibly document what Starkwell and Lovelock were saying, as most of it was stuff like “YEAH, FUCK YEAH” or “I’m… so… happy…” or “can we watch it in slow motion so it lasts longer?”.  After some more comedy / gore / awesome, Lionel ends up locking the two zombies (Mother and Nurse) in his basement and keeping them at bay with the use of tranquilizer, which he injects continuously up his Mother’s nose.  Eventually she escapes and gets hit by a trolley, and the locals see her, and assume she’s dead, so… a funeral is held.

[Lionel keeps injecting his Mom with tranquilizer, so no one catches on.  She is buried.]

Lovelock: For the characters in the film? No.  For us? HELL FUCKING YEAH.

So, that night, Lionel attempts to dig up Mother, but is interrupted by some punks.  Mother explodes out of her grave and kills one of the punks, and then, well, ZOMBIE OUTBREAK IN THE CEMETERY.  The priest shows up, and starts fighting zombies, ripping their limbs off… etc.

Lovelock: I KICK ASS FOR THE LORD!

Priest eventually dies and Lionel tranquilizes all of them, and then has them all over for dinner in his dining room, obviously.  His uncle shows up, complete with cold sores and his difficulty to pee.

[Two of the zombies hump at the dinner table.]

Lovelock: That’s why I never invite zombies over for dinner.

As the movie continues to play out, one thing is made abundantly clear.  THIS MOVIE IS FUCKING GROSS.  Nurse Zombie, fresh from being humped by Priest Zombie gives birth to Baby Zombie in the basement.

Starkwell: This movie should com with a warning: “DO NOT EAT DURING, OR EVEN IMMEDIATELY PRIOR TO WATCHING THE FILM.  ALSO, AFTER WATCHING YOU MAY NEVER REGAIN YOUR APPETITE.”

Lionel took Baby Zombie out for a walk, because, you know, that’s what you do in this situation.  I have never heard the guys laugh as hard as they did during this scene.  I believe at the end Lovelock said “The real question is how we can watch any other movie again after this.  What could possibly ever follow this?  Nothing.”

Lovelock: Ugh, his herpes are spreading…

Starkwell: You know you’re watching a fucked up movie when "a dirty dude’s huge mouth herpes" IS NOT even that high on the list of "most disgusting parts" of said movie.

Lionel then attempts to poison the zombies, not realizing that he actually injected them all with an animal stimulant.  As Uncle Herpes tries to rape Pequita, the Stimulated Zombies explode from the basement and turn the party into GOREFEST INFINITY.  The important thing to note is that it’s not just the AMOUNT of gore that is so special… Anyone can just utilize buckets of blood… it’s the creativity behind it all, how Zombies and Humans are being killed.  You’ve never seen anything like it.  Once again, I can’t possibly document what Starkwell and Lovelock were saying, as most of it was stuff like “YEAH, FUCK YEAH” or “I’m… so… happy…” or “can we watch it in slow motion so it lasts longer?”.

Lovelock: So… much… blood…

Starkwell: How do you film a scene like this without vomiting everywhere?

As Lionel has his final epic battle with Mother, and confronts her about the truth of his father’s death,  that Mother actually drowned him, Lionel is reborn, figuratively… although he does end up inside her and explodes out of her crotchal region… so there’s some NOT SO SUBTLE symbolism there.  The house explodes and Lionel and Pequita live happily ever after.  So do the audience.  Starkwell and Lovelock high-fived each other seven times in a row.  I think Lovelock's hand bled a little.
Documented by Kev D. and Posted at 22:10