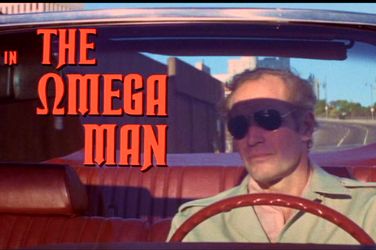 Unless you count the “Iron Chef” detour known as "I Am Omega", which we DON’T, this is the third version of Richard Matheson’s “I Am Legend” that Starkwell and Lovelock are being subjected to.  I can almost guarantee that it will not be their favorite, since they absolutely loved the Vincent Price vehicle "Last Man on Earth".  But, Heston’s hamminess should, at the very least, add a certain je-ne-sais-quoi to Richard Neville and to the whole affair in general.  Also, let’s hope he’s wearing some badass bellbottoms.  Will anything have the power of Vincent Price laugh-crying?  Likely not, but then again, one should never set those kinds of expectations on anything.

[Neville drives around a deserted city, goes shopping, talks to himself.]

Lovelock: Wait cars only cost two thousand bucks back then?

In case it’s not clear yet, this film was made in the early seventies.  Then the phones everywhere start ringing… in Neville’s mind?  I think?  Lovelock and Starkwell started laughing.  Then the infected people started attacking Neville to a funky soundtrack.  Lovelock and Starkwell both got up and started dancing.  The film starts explaining how the infection started because of a war between Russia and China.  Germ warfare?  Or maybe it’s because of technology?  Or maybe it’s because of greed? The group of infected people call themselves ‘The Family’ and seem to abhor the use of guns, cars, or technology of any kind.  They look like and act like a weird cult.  Could this be an anti-hippy film?  Or the other way around?  Anti-science?  Honestly, I don't think the writer really thought much about.  Starkwell has many theories.  Lovelock keeps telling him to “shut up and watch.”

[Neville is on helicopter, helicopter explodes, Neville is… injured?]

Starkwell: Biggest explosion ever survived by a human.

Lovelock: It's a madhouse?

[Neville is all dressed up.  He looks like Austin Powers.  He plays chess with a statue.]

Lovelock: I think I’m starting to side with the ‘Family’.  Neville kind of looks like an asshole.  A drunken asshole.  Could just be Heston, though.

Neville continues to explore the city and act totally fucking nuts.  He’s trying to find where the Family hang out during the day.  A magical place he calls the hive, or the nest.  Instead, he keeps finding a bunch of dead people.

[Neville tries on different track suits at a department store.]

Lovelock: How great would it be if it cut to a hilarious comedy montage of him trying on dresses?

Starkwell: Would be a little out of place.

Lovelock: Heston trying on dresses would never be out of place.  Ever.

Then, while ogling the mannequins at a department store, Neville sees an actual HUMAN FEMALE.  He chases her, obviously, with his shirt off.  I think Lovelock said “nice tits” to Heston at one point… Starkwell felt he was being a bit harsh on the ol’ fella.

[The Family catches Neville.  They seem to want to condemn him for believing in science.  They put a pointy dunce cap on him and carry him to the football stadium, with the intention of setting him on fire.]

Lovelock: You know, for a group that frowns on technology, they seem to have some pretty fancy sunglasses.

Starkwell: …and some pretty glittery robes.

Then Some Dude rescues Neville and brings him to Human Female from before.  She is a walking cliché of seventies blaxploitation afro cool.  Lovelock and Starkwell welcome her sass with open arms.  She’ll bring some much needed soul to Heston’s robotic Neville.  Afro Girl and her friend Motorcycle Cowboy seem to have a safehouse full of kids.  Lovelock makes up the names.  Anyways, Neville goes back to his house / lab with Afro Girl and her infected brother in an effort to save him.

[Afro Girl tries to seduce Neville, the Family breaks into his house.]

[Neville kills the intruder, then they resume the sex immediately.]

Lovelock: Neville’s still got it!

Starkwell: At least put your machine gun down, Neville.

Starkwell: Okay, that one was pretty good.

[Afro Girl helps Neville take a pint of his blood.]

Starkwell: Seriously?  Why would she put a lab coat on?  Dumb.

At one point Neville asks Afro Girl about Harlem… even though she never said she was from there… I guess he just assumed.  Lovelock said, I believe, “well, at least his wiener isn’t racist.”  Well, once Richie is cured, he tells Neville "man, you're a hostile nutjob".  He wants to save the Family, instead of wiping them out like vermin, as Neville wishes too.  Richie takes off to go find the Family.

Starkwell: Why would she go shopping at night?

[SHE HAS TURNED INTO ONE OF THEM.]

Lovelock: Well, here’s a question.  Why did she have a bunch of shopping bags if she was one of them?

Starkwell: That's what I just asked...

Lovelock: Probably for the same reason that Neville is wearing a Captain’s hat.

Starkwell: Why am I even here?

Infected Afro leads the Family into Neville’s home and, after a uselessly long scene of them breaking everything in his place, Neville takes a spear to the chest and spills tomato juice everywhere.  Right before he dies he gives the serum to Motorcycle Cowboy.  And they all live happily ever after?
Documented by Kev D. and Posted at 09:25