The Man from Planet X. 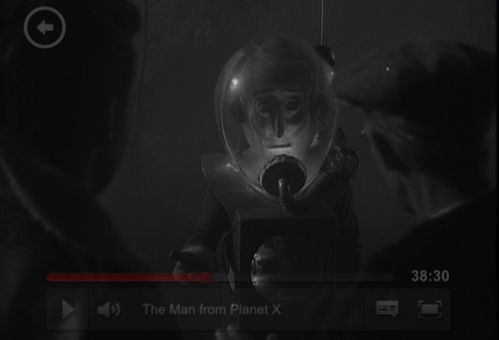 An alien enslaves the minds of the inhabitants of a remote Scottish island?  Sold.  Play movie.

[The main character talks to a scientist at an observatory.]

Lovelock: Especially the moustaches, and the reverb.

[Apparently some Planet X is rushing towards the Earth. Towards some isolated island.]

Starkwell: Obviously Newspaper Man wants to go to the island that is set to possibly be STRUCK BY A PLANET.

Lovelock: He certainly has moxie, and a nice hat.

[Newspaper Man meets woman he met six years ago, when she was still just a child.]

Starkwell: Holy Hell, did he just say “braces took care of your teeth and nature took care of the rest”? And that he noticed her legs?

Lovelock: Dude, that shit is fucked.  The fifties were fucked.

Starkwell: If you can remember that she was crying about going back to school at the end of the summer, and at that time, you were a grown ass man, and are now obviously trying to hook up with her and do all the sexy stuffs, you should likely go to jail.  Forever.

Lovelock: Dude, that shit is fucked.  The fifties were fucked.

Anyways, then nothing was happening and Lovelock fell asleep.  The girl is supposed to be British, even though she is CLEARLY American.  Starkwell chuckled often.  Lovelock continued to snore, often.  Eventually, Nancy Dumpface gets a flat tire and finds a spaceship with a creepy alien on board.  Starkwell kicks Lovelock, tells him to get up.

[Bright light flashes in the Doctor’s face, he is now possessed.  One minute later, he isn’t possessed anymore.  Nancy Dumpface asks him “Do you think it might have something to do with that planet?”]

Starkwell: Great work detective Nancy Dumpface... Is she for real?

Lovelock: Did she say that we have a "bad case of the jitters"?

Starkwell: I don’t understand… was he possessed or not or… ?

Lovelock: I don’t think the film makers knew either.

Starkwell: How have they still not even suspected that that thing is a space ship?  Worst scientists ever.

Lovelock: Do you think this might have something to do with that planet?

Anyways, the Doctor and Newsy find the creepy alien and try to communicate with him, for like ten minutes or more.  It drags on forever.

[It very suddenly cuts from the alien to Doctor in bed with the flu?]

Starkwell: Seriously? Nothing happens, and then when something clearly DOES happen, it just skips right over it, without telling us how the Doctor ended up with the flu?  Man, fuck this movie.

Lovelock: Something needs to happen.  Or make sense.  Or both.

[The timeline is incoherent and insane.  It jumps from now to later, back to now… but it seems to all be happening at the same time.  Then Doctor’s Assistant kills the alien?]

Lovelock: On the plus side, something is happening, on the down side, it is all making less sense now.

So, the alien tries to build an army of zombie villagers, mostly because one of the doctors tried to kill him.  Seems reasonable.  Eventually it fails.  Humans win, hooray.  It’s all much more boring than it sounds.  Lovelock and Starkwell made fun of the fake backdrops a few times, and how the actor in the alien costume clearly couldn’t see anything… but otherwise, they mostly SLEPT.  I should mention that they both noted that the fight sequences between the alien and Newspaper Guy were the worst fights of all time.

Planet X misses the Earth, the alien gets exploded.  The end.  Did I mention that the alien was basically friendly, and that was only trying to escape the fact that the humans were trying to kill it?  Hooray for humans.
Documented by Kev D. and Posted at 12:45