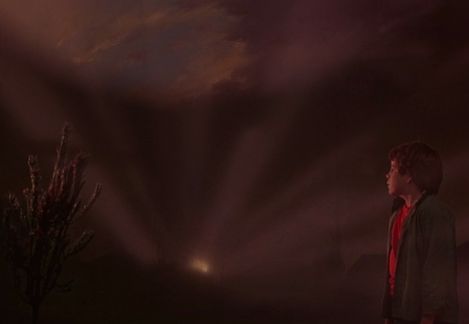 Starkwell and Lovelock are notorious for having trouble dealing with kids in the horror realm, or even in films in general.  Usually they find them irritating at best and completely useless at worst.  I’ve tried to avoid telling them that “The Gate” is a story about kids, for EXACTLY that reason.  So they might hate me for a little while.  There have certainly been exceptions to their “kids in movies always suck” rule, so, I’m anxious to see how young Stephen Dorff will hold up.

[Dorff comes home to an empty house and a creepy movie plays in the Basement.]

Lovelock: Wait… is this about a kid?

Starkwell: Kev, you got some splainin' to do.

It will take some time, but I’m sure Young Dorff, or Glenn as he is called in this movie, can win them over. After a huge tree in Glenn’s backyard is cut, he and his friend dig up the sod that was put over the hole.  Then they uncover a magical hole!  And then, OBVIOUSLY, Young Dorff’s parents go away and leave TEENAGE SISTER Alexandra to look after the house and her little brother.

[As soon as the parents leave, Alexandra throws a party with alcohol, bad ‘80s music and crappy people.]

Lovelock: You have got to love the level of irresponsible behaviour often on display in the eighties.

[Teenagers sit around telling ghost stories and having a séance of some kind.]

Lovelock: Teenagers in the eighties are fucking bananas.

Starkwell: Kids today could learn something from this.

Lovelock: If they could put down their Scooby Snacks and Pac Man video games long enough to pay attention.

[Terry hugs the ghost of his mom, but then, it’s actually the dead family dog.  SCREAM.]

Lovelock: If I had seen this as a kid, this is the moment I would have pooped.  Good thing I was busy watching “The Labyrinth”, “The Goonies” and “Marked for Death”.

Starkwell: You're thinking of "Above the Law".

Lovelock: David Bowie’s horrible outfit and dick print in “Labyrinth” are much still scarier than this, I guess.

And that was it, for now.  It’s a bit slow moving, but it’s moving in the right direction, which is more than I can say about a lot of films, and certainly enough to keep Starkwell and Lovelock engaged.

Lovelock: So much pastel color clothing and bad hair.  So… much… too… much.

Terry listened to some bad metal record by a band called “Sacrifix”, where they had a spoken part in the middle of a song where they talked about “The Gate” and how it was a portal of some kind and some dark Gods were going to take back the world that was rightfully theirs.  Meanwhile Alexandra’s friends are the worst people ever and they take her to the beach, leaving Glenn alone, obviously.

[“Sacrifix” are European, and only made ONE ALBUM called “The Dark Book” before they all died in a plane crash.  It contains the necessary incantations to close the Gate!]

Alexandra’s boyfriend throws the dead dog into the backyard hole, which will TOTALLY open the gates of Hell.  So basically, they’re screwed.  But wait! Alexandra didn’t go to the beach after all!  She went and bought a rocket for her brother!  So they could launch it together!  They're friends again! I swear I think I saw Lovelock crying at the beautiful moment, but he CLAIMS he had eaten an onion.  It was actually pretty cute, all joking aside.

Lovelock: This would have hands down ruined sleep for a year for me.

Then shit gets real crazy and gory as demon versions of Glenn’s parents try to choke him and he makes both of their faces melt and well… yeah.  Lovelock was playing air guitar and making up melodies that he claims would be what Sacrifix would sound like if they were real.  And this was before the little “minions” showed up.

Lovelock: Am I nuts, or do the special effects hold up surprisingly well?

Starkwell: You’re not crazy.  Well, at least, not for making that claim.

[Terry throws a Bible into the Gate, Gate explodes.]

Starkwell: With thirty minutes left, I highly doubt that’s the end of it.

Lovelock: Maybe the last half hour will be a Sacrifix concert.

Starkwell: Dude, they’re not real… and if they were, they died in a plane crash, remember?

Lovelock: Well, in that case, I hope the minions come and eat Alexandra’s stupid friends.

[Zombie comes out of the wall, drags Terry into the wall, wall closes.]

Then there was a scene where Alexandra threw a Boom Box at the zombie and it fell apart into a bunch of little minions.  Glenn went to find his father’s gun and was attacked by Zombie Terry.  Starkwell and Lovelock sat quietly on the edge of their seats.

Starkwell: So… is Terry totally dead?

Lovelock: I hope not… as a zombie he was pretty cool.

[Original Zombie comes back again, takes Alexandra into other world.]

Starkwell: Alexandra will DEFINITELY be cooler as a zombie.

After the floor drops out in the middle of the house and shows the GATE at full power, a bunch of minions come out and summon some kind of super demon.  Black smoke flies out of the Gate like a reverse tornado. HELL ON EARTH!

Lovelock: That is EXACTLY how I would react in his position, at age eight, age thirty or age infinity.

[Glenn stabs the palm of his hand, which now contains an eyeball.]

Starkwell: Forget about being in his position, I’m contemplating doing that right now just watching this.

Then Glenn shot a toy rocket at the super Demon’s head and yelled out “HAPPY BIRTHDAY”.  I’m not sure why.  Needless to say, Lovelock and Starkwell cheered and repeated the line several times.  I will predict that they will repeat it a lot over the next, probably, several years.  Oh yeah, then the Demon explodes into FIREWORKS.  Everything essentially returns to normal, except that the house is still completely destroyed.  Awesome.

On a scale from one to 'worst kid ever', they've just given Dorff/Glenn a three.  But I'm not really sure what that means.  Happy birthday.
Documented by Kev D. and Posted at 19:30