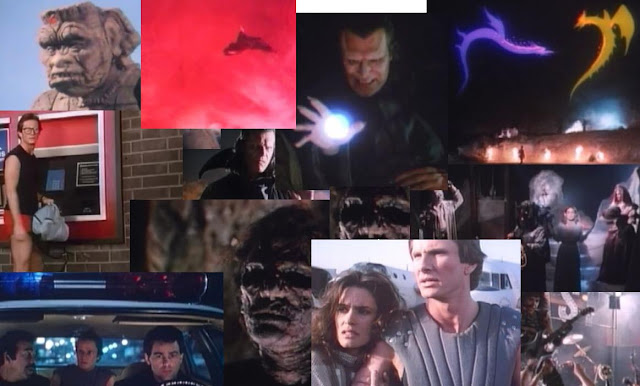 I apologize in advance for the length of this documented conversation.  It was impossible to get around.
-----
This film was at one point called “Ragewar: The Challenges of Excalibrate”, which to me is a much cooler and more descriptive title than “The Dungeonmaster”.  But apparently the title was changed to try to trick “Dungeons and Dragons” nerds into checking it out.  Wow.  This is an anthology picture, sort of, since it features different sections each written and directed by different people.  Seriously, there are like eight writers and directors.  Charles Band (who? exactly.) leads the way. The overall narrative is that a computer programmer and his girlfriend get sucked into an alternate universe and have to deal with seven-ish different worlds, or “levels” if you want to make it sound like a video game… something I’m certain the producers were going for, given that this was produced and released in the wake of “TRON” and its popularity.  Who doesn’t love a good mockbuster!?!  Answer: In general, Starkwell doesn’t, neither does Lovelock.  Let’s see how this one holds up.

[The film starts with absolutely no set up of characters or story.  We see a guy waking up on a hospital bed of some kind, and he sees a girl in lingerie.  He unplugs himself, follows her, outside in slow motion, and chases her around outside.  Eventually they end up in a strange hallway, and in a dark room.  Now she’s naked and they start with the foreplay and the full frontal.  Somehow she’s on a bed.  Then, weird goblinesque creatures come into the room in some kind of submarine door and take the naked girl away, into some kind of foggy room.  Then the opening credits roll.  The music is EXTRA dramatic and intense.]

Lovelock: Is… ummmm… what?

Turns out, that was a dream… I think.  Some nerdy programmer wakes up at the office.

[Paul has a talking watch, and he goes running after work.]

Lovelock: The character SAYS he runs every day, but that actor has clearly never run before.

[Cut to an aerobics class for like five minutes.]

[He has a talking computer he calls “CAL”.]

Starkwell: Seriously?  Cal?  Sounds a little like Hal... Oh I get it.

[Aerobics instructor Gwen is his girlfriend.]

Lovelock: What could she possibly see in this guy?

[He wants to marry her, and says he ran it by his computer CAL, and that she, the computer, thought it was a good idea.]

Starkwell: Ummm… So… he invented a computer that thinks for itself… and he uses it to find recipes and give him relationship advice?

Anyways, Gwen doesn’t want to marry him, because he is CLEARLY obsessed with his computer.  Then there’s another crazy dream sequence that makes no sense and Starkwell and Lovelock spent the whole time laughing at Paul's in-dream outfit.  My favorite was Lovelock asking “why is he dressed like Smoke from Mortal Kombat?” to which Starkwell responded “I was thinking Gay Mad Max.”  Obviously Gwen was in the dream, basically naked again.  At some point, even though he woke up, he was still in the dream… or it’s real now… or… anyways.  The girl is still in her underwear.  Then we are introduced to the Dungeonmaster (?), and he magically zaps Paul, and then he is wearing the Sub-Zero outfit again.  I think the Dungeonmaster is named Mestema, and refers to himself in the third person.  Also, he is Satan.  He raises his sword and says by the power of Satan, in an OBVIOUS nod to “He-Man” shouting “by the power of Grayskull”.  All of this happened in the span of about three minutes.

[Dungeonmaster knights Paul and tells him his name is “X-CaliBR8”.  He is apparently going to be a worthy match for Satan.  Gwen is still chained up, but is no longer in her underwear.  Apparently Dungeonmaster has waited centuries for this...]

Lovelock: Seriously dude, what the fuck is going on?  Did somebody put something in my club soda?  Are we on "Candid Camera" or something?

Starkwell: I want to run, but, I can’t look away.

Then there’s a flash of light, and Paul is suddenly in the wilderness and his magic bracelet, or POWER GLOVE is being stolen by two dwarf cavemen who, for whatever reason, sound like hyperventilating chipmunks.  Then a giant stone monument comes to life and chases Paul, shooting lasers out of the jewel in his forehead.

[Giant Stone Creature explodes when Paul shoots the jewel in its forehead.]

Lovelock:  Obviously he knew exactly where to shoot it, and how to aim with his forearm band.

Starkwell: If there’s one thing computer nerds know, it’s how to beat the boss at the end of the level.

[Cuts immediately back to Paul in cave with Dungeonmaster.  No Underwear Gwen  this time.]

Starkwell: As much fun as I am having… this all seems a little… what’s the word I’m looking for… fucking pointless what the fuck is going on.

After an argument with Mestema about where Gwen was, Paul is warped to some foggy cave full of warrior zombies.

[Paul gets philosophical and waxes existential to defeat his zombie self, instantly warped back to FIRE CAVE.  Gwen is here this time.]

Lovelock is being surprisingly forgiving, since that is likely to be the only zombie content in this whole movie.  Then the Dungeonmaster said “Do you fancy music?  This is a piece of my own composing" TOTALLY out of the fucking blue, and he made them listen to his music.  Then, Paul used his bracelet to start playing shitty synth 80s rock to drown out Dungeonmaster's 'composing'.  It was a rock off of sorts, except no one was rocking AT ALL.  Then Dungeonmaster warped Paul to a shitty underground hair metal band’s rock show.  I should mention that it took about twenty minutes to get through this five minute scene, because Lovelock and Starkwell kept falling unconscious from laughing too hard, and I kept having to pause and rewind.

Starkwell: In reality there would be a lot less women in the audience.

Then his Super Bracelet tells him how to defeat WASP and he does.  Back to FIRE CAVE.  Momentarily.  Then he is zapped to an ice level.

Lovelock: I hope he fights a snowman!

[Instead, the ice cave is full of frozen PEOPLE OF HISTORY.]

Starkwell: I don’t really get why Dungeonmaster would have Albert Einstein and Jack the Ripper…

Lovelock: I guess it’s all of the most important villains in history… like… wait is that a Werewolf?

Starkwell: Why is Einstein a villain?

Then they rip a shiny spiky iceball out of Einstein’s hand and throw it at the other bad villains.  It blows up like a grenade, obviously.  And scene.  And back to firecave.

Lovelock: This must be where Bill and Ted got all of their ideas.

Then Gwen disappears, Dungeonmaster lets out a groan like he’s letting out a huge turd, and Paul wakes up in an alley next to a dumpster and a dead girl.

Starkwell: It’s hard to believe that we’ve only been watching this for forty five minutes.

Lovelock: There’s still another half hour… I can’t even imagine what’s in store.

[Paul jumps out of the back door of a cop car.]

Lovelock: I’m pretty sure the back doors of a squad car don’t unlock and open from the inside…

Starkwell: See, that’s normally the kind of observation I would make about continuity errors… but at this point…

Lovelock: I guess it’s hard to really have any rules at all when you can literally make your character do anything, and make anything happen at any time.

Starkwell: The “X-CaliBR8” bracelet is the ultimate tool for the lazy screenwriter.  “How will Paul get out of this Jam?  Oh I know, his bracelet makes the cop car go away! And then things blow up. EXCALIBRATE!”

[After solving a crime in New York City, they’re back, and for some reason Dungeonmaster doesn’t know what the word ZAP means.]

Lovelock: Seems odd since half of this movie is stuff being zapped, with zappy sound effects.

Starkwell: Also, why would it matter at all that he doesn’t know the meaning, and why would Paul tell him it’s a “magic” word?

Lovelock: You know that with this movie, that will never come back as anything relevant.

Now Paul is at the mouth of a cave full of THERMO-NUCLEAR activity, according to his Power Bracelet, but he ventures in, since he can hear Gwen crying for help.

[Goblin thing gets smushed by a boulder.]

[Goblin turns into an angel in lingerie.]

Then he warps back to Dungeonmaster and Dungeonmaster calmly tells the story about torturing a cat as a child, and finishes it by warping them to a junkyard for old planes.

[Dunebuggy chase in the desert with Big Laser shootout.]

Starkwell: There’s just such wonderful attention to detail in this film.

[Gwen and Paul crash into another dunebuggy HEAD ON and blow up.  But then they’re back in FIRE CAVE.]

Lovelock: So… did they beat that level… because it seems like they lost that one and it should be game over at this point.

Starkwell: This movie was game over a long time ago.

Gwen, in perhaps her most supportive moment of the whole movie, tells Paul not to challenge the Dungeonmaster because “he is a giant and you can’t possibly win.”  Now that’s faith in your man.

[Paul throws Dungeonmaster into the lava… pretty easily might I add after like one minute of fist fighting.]

Lovelock: Ha!  You showed that bitch Gwen.  Dude should leave her chained up and go after the three sex slaves he was offered earlier.  I bet they’d believe in him.

[Then they're suddenly back in their apartment, smoke everywhere and Gwen's in her underwear again.  She then suddenly exclaims “yes let’s get married, I asked CAL”.]

Starkwell: Wait… I thought they were in the computer… the computer isn’t evil? … wait… what?

Lovelock: So… where were they?  Why is there smoke all over the apartment?  Why is she in her underwear, but he is fully clothed?

Starkwell: Was the dream sequence from the beginning part of all of this?  Was this all a dream?  AM I DREAMING?

Lovelock: I notice the importance of the word ZAP never came up again.

The credits rolled and some random scenes from the movie replayed in the background.  It didn't help clarify anything.  Starkwell and Lovelock sat around for the next hour asking each other questions about RAGEWAR.  Oddly enough, I think that somehow, they loved it.
Documented by Kev D. and Posted at 20:45