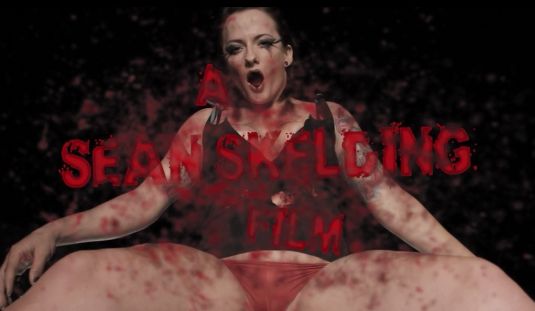 Basically, this is just another fucking zombie movie involving strippers.  There shouldn’t be as many as there are, and yet, alas, here is one more.  Starkwell and Lovelock head into this one ready to hate.  The film starts with a nerdy Jesse Eisenbergesque character going over rules for surviving in “Stripperland”… “Zombieland”… “Stripperland”…Oh I get it now.

Starkwell: So… How much of this is going to be a cheap and sleazy knockoff of “Zombieland”?

Lovelock: I guess we’re ‘bout to find out.

Lovelock: If he only knew just HOW wrong.

Starkwell: Yeah, if he only knew.  If he only knew.  Guess what? I KNOW.  And I already know that I shouldn’t have already wasted five minutes on this piece of shit.  FUCK YOU, I’m out.

[Starkwell leaves before the opening credits even got a chance to roll.  He REALLY hates plagiarism.  This explains why he has basically never been able to sit through an ‘Asylum’ movie.  Lovelock is going to stick it out… for now.]

Anyways, main guy says “Welcome to Stripperland” and some really shitty “rock” music starts playing, the credits roll, and it’s a montage of strippers eating people.  Immediately after the credits, we are introduced to the Woody Harrelson knock off.  Instead of looking for twinkies, he’s looking for someone to bake a cake from scratch.  I wish I was making this up.  At this point, upon Lovelock’s request, I start skipping head.

[Apparently Linnea Quigley is in this too…]

[Can you believe this thing is almost two hours long?]

Why was this made?  Fuck this movie.  It makes “Poultrygeist” look like “Pontypool”.
Documented by Kev D. and Posted at 07:55