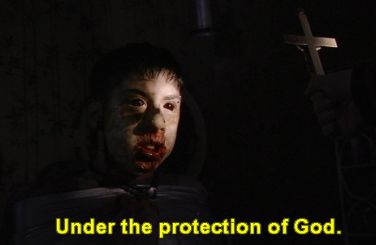 I need to apologize in advance for the frantic, at times, incoherent nature of the Lovelock / Starkwell conversation documented for "[REC]2"… The movie is just so frantic and insane that I simply couldn’t keep up with everything.  I did my best.  So apparently the action here picks up right where the first film left off.  Starkwell and Lovelock have wanted to watch this one pretty much since ONE SECOND after the first film ended.  Because a fair amount of time has gone by, a good deal of hype has now built up.  This is unfortunate for Balaguero and Plaza, since the expectations are now through the roof.  Let’s see if they can meet this now impossibly high bar that they set.  The film starts with the closing shot from the first film and then immediately switches to the helmet cam view of a SWAT team member heading to investigate the quarantined building.

[SWAT team arrives in the building.]

Starkwell: Back in the ol’ stomping grounds.

Lovelock: Remind me not to ever join the SWAT team.  In Spain.

Starkwell: Was that ever an option?

It’s nice to see the old building again.  From the first seconds of the film, the atmosphere is tense, and Starkwell and Lovelock are on the edge of their seats. Many nervous farts and weird gasps were heard on several different occasions.  The SWAT team explored the building.  What’s really cool, is since all team members have helmet cams, the director can switch from one person’s view to another as he chooses.

[Music is coming from an apartment. Martos goes to investigate.]

Starkwell: So Martos is the first to go I guess…

Starkwell: I don’t remember them turning that quickly in the first film.

[Group Leader guy recites some weird exorcism type shit and Martos stands like a deer in the headlight.]

Lovelock: AND it’s fucking rad.  And creepy.  I just pooped a little.

[Lovelock goes to change his pants during one of the “dialogue” scenes.]

Then the Leader Dude explains to them the origin of the plague, and some possessed girl.  And the Vatican.  And demons.  And stuff.  It’s all very scary.

[Turns out SWAT Leader Dude is a PRIEST!]

Lovelock: That’s why I don’t go to church.

Starkwell: Yeah that’s why… wait… that doesn’t even make any sense.

Lovelock: The devil can't possess me if I don’t buy the snake oil.

Starkwell: I’m pretty sure that isn’t how it works.

Lovelock: Well, also, I don't like all that Catholic guilt.

The zombies seem quite a bit more agile in this one than they did in the first one.  I think it would bother Starkwell more if the rest of the film wasn’t so, as Lovelock puts it, “BALLS TO THE WALL CRAZY.”  Some of the crazyballs so far have included, 'dead decomposing priests hiding in the ceiling', 'priest blowing zombie child brains out', and of course, 'first person view of dude going through the air ducts and finding a whole group of demon kids'.  I haven’t seen Lovelock fist pump this often in a while.

Starkwell: Group of kids?  I hope this movie isn’t going all “Scooby-Doo” on us.

Lovelock: I don’t know, they just killed a human… I kind of hope those meddling kids put an end to the Priest and his wacky SWAT crazies.

Starkwell: Dude, the demons are the bad guys.

Lovelock: If you say so.

Then we see some of the characters from the first movie, now as zombies, and we get many more fist pumps from Lovelock.  Starkwell hesitated momentarily, but then decided it was safe for him too, to fist pump away.  But then it got REALLY chaotic and creepy, and when it eventually showed one of the dudes staring in a mirror and blowing his brains out, the room got quiet.  No more fist pumps.  They both sat quietly horrified and one hundred percent invested in the movie.

[The SWAT team camera feed suddenly fades to black and we cut to the Scooby Gang Kids’ camera feed, from earlier.  They are trying to blow up an inflatable sex doll.]

Starkwell: I don’t remember the “Scooby Gang” ever doing that.

Lovelock: Might have helped the old show.  Definitely would have helped those fucking movies they made with Buffy and Dude Shitface.

Lovelock: I don’t know… All the fucking dudes in those movies?

Lovelock: I liked this movie better when it was all SWAT team and action ‘splosions.

Starkwell: Dude, give it a chance.

[I can't believe Starkwell is saying that... Either way, the troop(s) are getting restless.]

[The kids argue with the Bomb Squad Guy telling them to leave the building.]

Starkwell: The kid finds a random gun on the floor and blood everywhere and he wants to stay?  He’s either brave or a real fucking moron.

[Somewhere in the argument, Angry Fireman Dude slaps The Kid in the face.]

Lovelock: There really aren’t enough smart-ass teenagers being slapped in films these days.

[They actually rewound and watched THE SLAP several times.  Each time the slap connected, Lovelock would say “IN THE FACE”.]

They got real quiet again when all Hell broke loose again.  This time, crazyballs included 'zombie dying from fireworks in the mouth', 'snipers shooting at the kids' and, of course, the second shot of 'DUDE WITH SANDWCH BAG falling down three flights and exploding with blood'.  SWAT Team meet up with Scooby Gang and take their camera.  It runs out of battery right as they find Angela from the first movie!  I swear I think I saw a single tear of joy streaming down Lovelock’s cheek.

[Priest talks to Demon, currently possessing Scooby Gang Tito, and he figures out where the Queen Demon is hiding.]

Lovelock: To the penthouse!

Starkwell: Isn’t that where they went at the start of the film?

Lovelock: You know what they say… "it’s always in the first place you look".

Starkwell: Is that really something they say?

After some intense and scary NIGHT VISION sequences, they eventually find Queen Demon, and Angela shoots her in the face and blows up her head.

[MIND BLOWN.  Then they show a flashback of the Queen Demon transferring itself to Angela.  It’s fucking revolting.]

[Turns out Lovelock pooped his pants again and had gone to change.]

Great sequel with an interesting set-up for the next (two) film(s).

Lovelock: What did I miss?
Documented by Kev D. and Posted at 20:40