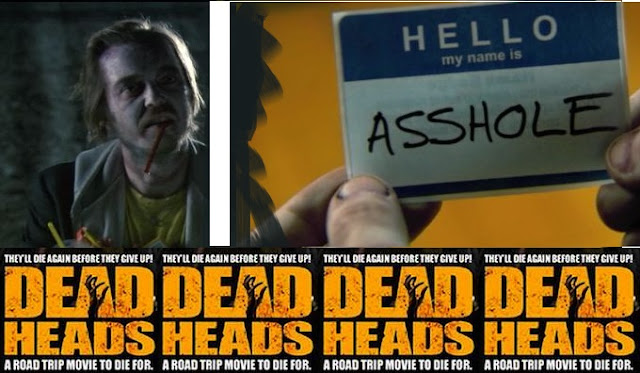 Recently the market has become saturated with comedic zombie fare.  Most of these comedies have difficulty paying proper tribute to the source material that it attempts to make light of, and ends up coming across as a huge turd of no laughs, no scares, no interest.  The relatively new “Deadheads” got mixed reviews, as these films often do, so I will leave it up to Lovelock and Starkwell to judge this one.   Since Starkwell first thought that he was about to watch a documentary about “Grateful Dead” fans, I can’t help but feel like he will mostly be disappointed.

[“Grainy” filter is applied to the film during the intro credits.]

Lovelock: Well, at least it’s only in the intro…

Starkwell: That doesn’t make it ok.

We are introduced to two zombies that haven’t lost brain function, but apparently still need to eat flesh.  The musical score, a tad cartoonish, has been referred to as “out-of-place and distracting” by Starkwell.

[Police man asks ain character if he has seen “Dawn of the Dead”.]

Starkwell: Seriously?  Smells like Altman.  Looks like we have another Robert Altman style of writer.  Talking about movies NEVER SOUNDS NATURAL OR COOL.  Ever.

Lovelock: I think you mean Mark Altman.  The dude behind "Dead and Deader", among others...

Starkwell: What did I say?

Starkwell: Fair enough, but we're nowhere near that right now.

The jokes aren’t terrible.  They’re not getting giant laughs.  Rather, they’re getting some minor smiles out of both Lovelock and Starkwell.  It’s unclear what is going on in the film, though.  It would appear that Mike, normal guy, and Brent, comic relief guy, have woken up right at the beginning of the zombie outbreak.  We have also found out that they died about three years ago.

[Evil Corporation is behind the Outbreak, NERDY GIRL talks with a nasal voice.]

Lovelock: Possibly to make us turn it off.

[Random Black Guy is recruited by the Evil Corporation to kill all the zombies.]

Starkwell: Soooooo… as long as he “gets paid he gonna bring dem zombies?”  Weak.

Then there’s a scene where a zombie, Brent’s pet zombie named Cheese, was driving a car.  Starkwell has had issues with this sort of thing in the past.  Lovelock tried to reassure him, and actually convinced him to stick around.  Although the humor, again, isn’t awful, Starkwell is wondering when something might actually happen.

[Mike gets stoned and talks about Vampires and Werewolves and how to kill them.]

Starkwell: Am I the only one that thinks this routine sounds like a failed stand-up bit?

Lovelock: Dude, it sounds like the kind of shit people would do at the Open Mics you used to do.

Starkwell: At least those had a two drink minimum…

Lovelock: It would take more than two drinks to save this one.

Seriously, nothing is happening.

[Brent’s dick falls off, he holds it up, then puts it in his pocket.]

Starkwell: I’m out.  Let me know how it ends.

Lovelock: No, you’re not leaving?

Starkwell: No, don’t tell me how it ends.

Zombie Hunter apparently met up with Handlebar Guy and his sidekick.  They’re tracking Brent and Mike, apparently the Evil Scientists had injected them with some other version of the virus.

[They go to watch “Evil Dead” at a Drive-Thru.]

About forty five minutes in, things really start picking up, the plot ACTUALLY thickens a little.  Not to a melted cheese thickness, but more to the thickness of a watery bowl of oatmeal.  Which is a welcome change, since, as Lovelock says, “thus far it’s been as thin as Starkwell’s hair”.  That insult was enough to bring Starkwell back into the room.  Once he saw the newly thickened plot, he decided to stick around.  Then there was a “Goonies” reference, and actually, Starkwell reacted to it quite positively.  So it turns out that Mike’s girlfriend’s father is the one that killed him.  Also, he’s the CEO of the Evil Corporation behind the virus.

Starkwell: So, why is it no one seems to know that there’s an outbreak going on?

Lovelock: Probably for the same reason that the outbreak fell on the night of his ten year high school reunion.

HOLY SHIT THIS THING IS DRAGGING.  There’s only twenty minutes left, and they haven’t explained anything.  Nor has anything really happened.  As always, I’m paraphrasing here.  They both said something along those lines.  Then the film basically tries to tie everything up in five minutes.

Starkwell: Why would the Zombie Hunter guy suddenly be a good guy?

Lovelock: For the same reason that there basically aren’t any zombies at all, anywhere, anymore, since the beginning of the movie.

Starkwell: For the same reason that all of a sudden now bullets hurt them, and being hit by a truck hurts them, and they actually limp and stuff.

Lovelock: For the same reason that ALL THIS SHIT.  And so on and so forth.

Starkwell: But, how could zombie Mike and the girl end up together?  Won’t his wiener fall off?  Why isn’t the dad in jail?

Lovelock: And why did they bother having that nerd girl character with the nasal voice?  Why was the corporation developing a re-animating drug anyways? Why did they hint at the fact that Handlebar Mustache was going to find Brent's severed penis in his pocket, but then they never developed it?

Starkwell: What a mess.  Just because it’s a comedy doesn’t mean you can just do anything.

Lovelock: This felt like one of those movies based off of a "Saturday Night Live" skit.  There is NO REASON for it to exist in the first place, let alone be ninety minutes long.

Starkwell: I don’t think I could have said it any better.
Documented by Kev D. and Posted at 08:25