City of the Living Dead. 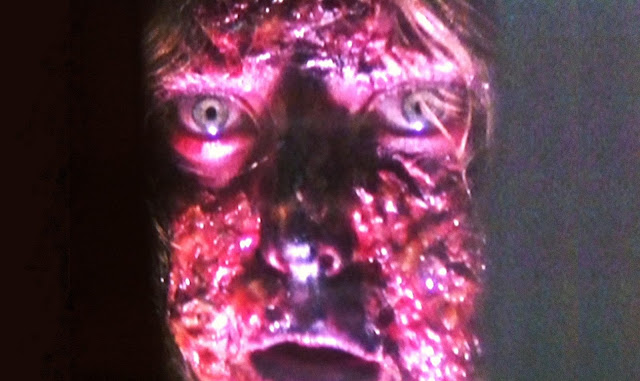 Welcome to Lucio Fulci’s first film in his “Gates of Hell” trilogy.  I honestly don’t need to set this up any more than that.  Let’s do this.

[Movie opens with a scream, title shot and then creepy foggy cemetery.]

Lovelock: Do you mind pausing it?  I already need to change my pants.

Starkwell: Thanks, in no small part, to the brilliant Fabio Frizzi soundtrack.

[People sitting around a medium’s table, and during a séance, a girl named Mary sees a priest hang himself, zombies rise out of graves, and she is pronounced dead.  An ambulance carts her off.]

Lovelock: Well, if she’s dead, why did they speed off in an ambulance?

Then this cop comes to investigate and makes fun of the medium and her peeps.  He calls them a bunch of junkies “on grass”.

[Dude squats in a house, wants to make sex with a blow up doll, and sees some maggot and worm covered bloody dead baby or child or animal or something.]

Starkwell: I feel like Fulci knows exactly how to get directly in my brain make me FREAK OUT!

It’s pretty clear that Fulci wasn’t going for coherence.  But, although both Lovelock and Starkwell were thoroughly confused by the seemingly nonsensical plot, they sat quietly on the edge of their seats.

Lovelock: You know doors have locks, Doctor.  Worst shrink ever.

Starkwell: Seriously, she’s talking about incest and then the other girl comes in like “HEY SANDRA, WHAT’S UP!?”

Lovelock: Worse than that, when she finally leaves, the shrink dude is like “Now where were we?”  Insane.  That’s why I don’t trust doctors.

Lovelock: Nothing is happening!

Starkwell: I don’t know… I kind of feel like everything is happening.

Lovelock: I know what you mean.  Nothing needs to happen when shit is this fucked up.

Lovelock: First they pronounce her dead, then they rush her off in an ambulance, now she’s not dead?

Starkwell: Where is all that light in the coffin coming from?

[Cop hears her screaming, takes a pick axe to the coffin to get it open.  Misses driving the spike into her head by about a centimeter… three or four times in a row.]

Starkwell: Dude, like there wasn’t a better way to get it open?

Lovelock: You’re asking a bit much of this guy.  There’s no time to think when you’re swinging a pick axe.  Or when you’re rocking that haircut.

Anyways, the cop and Mary set out to find the city of the living dead.  Anyways, stuff happens.  They seem to be tying this in to Salem Witches?  Not sure.

[Zombie priest smears a fistful of dirt, worms and guts into a girl’s face.]

Lovelock: Maybe he’s selling a new face wash.  He seems only slightly less pushy than those salesmen with that Dead Sea mud at those mall kiosks.

Then a girl bleeds from her eyes and vomits out her intestines and organs.  She then proceeds to tear out her boyfriend’s brains with her fist.  Starkwell ran to go vomit.  Lovelock was like “you want me to pause it” while laughing hysterically.

So now Detective Man and Mary are off to stop the zombie priest, as he is the one, according to her séance vision, responsible for OPENING THE GATES OF HELL.  They think by stopping the priest, they’ll shut the door.  Again, all based, of course, on Mary’s visions.  There are a confusingly large number of characters, so Lovelock and Starkwell are doing their best to stay focused on the Detective and Mary.

[Kid sees his recently dead mother in the window.]

Lovelock: Why is her face all melty?

Starkwell: I assume for the same reason that the girl that puked her guts puked like a million liters of guts.

Eventually the Shrink from the beginning ends up at his patient Sandra's house… I thought that the girl who interrupted their session was his girlfriend, but now he called this Sandra patient honey, and Starkwell is pretty sure that his girlfriend, Queen Interrupto, is dead.  But honestly, who knows?  “Probably not Fulci”, added Starkwell.

Lovelock: Wait, so who is the girlfriend?  Who is the kid’s mother?

Meanwhile Inflatable Doll Guy breaks into a friend’s house, and sleeps in the garage.  I should mention, he is on the run, because the police think he is responsible for the wave of murders in town.

Lovelock: Oh man, I really hope that drill is there for a reason.

After a random scene with Detective and Mary, we go back to Fugitive Pervert hiding in the garage of a girlfriend.

[Father catches pervert and DRILLS THROUGH HIS HEAD from temple to temple.  With drill from earlier.]

Lovelock: I told you the drill would make a comeback.  Fulci and Lovelock, one, Starkwell, zero.

Starkwell: Wait, why is there a score? And how come Fulci is on your team?

The Shrink and Sandra meet up with Detective and Mary, and while in his office, the window flies open and maggots pour into the room through the window by the bajillions.  It is pretty clear that Fulci used REAL FUCKING MAGGOTS.

Lovelock: How could anyone film that, and stand there, covered in maggots?  I would freak the fuck out.  I would puke everywhere… no?  Starkwell? …

Lovelock: At this point you must just be dry heaving.  Your calzone wasn’t THAT big.

[Inaudible comeback from Starkwell, from the bathroom floor.]

Lovelock: I can’t wait to see if Fulci can top, what I will call MAGGOT BLAST INFINITY.

Lovelock: Normally I hate all kids in all movies, but this kid is kind of a bad ass.

The Kid runs around the city, but keeps getting ambushed by gross zombies with worms on their faces.  Lovelock and Starkwell both look stressed, although Starkwell’s stress seems to be mostly rooted in the fact that he doesn’t want to puke again, and the zombies keep looking more and more disgusting.

[Detective, Shrink and Mary stand around in cemetery.  Fog rolls in, they hear jungle sounds.]

Lovelock: I think I’ve heard those in a Looney Tunes cartoon.

Lovelock: The actors that Fulci would get to play zombies were always so much better at acting like zombies than anyone in his competitors’ films.

Starkwell: You’re basing that on…?

Lovelock: Nothing, I guess.

Lovelock: So, Fulci CLEARLY has no problem with killing, basically anyone and everyone.

After stabbing Sandra in the gut to make Mary’s eyes stop bleeding, the Shrink and Mary pressed onward into the weird cave / tomb full of skeletons and zombies, I assume, in an effort to kill Zombie Priest and close the gates of Hell.  Lovelock played air drums the WHOLE time along to the great synth soundtrack by Fabio Frizzi.

[Shrink stabs Zombie Priest in the crotch, creates a hole in his body that oozes guts and green slime, and then the priest spontaneously combusts, along with the rest of the zombies.]

Lovelock: Arguably the best death scene ever.  EVERY movie should have a scene like that.

Starkwell: Not sure it would belong in any movie.

Starkwell: “Last of the Mohicans.”

Lovelock: EASY! The last Mohican dies at the beginning, and then like all the Mohicans come back as zombies, and then at some point someone stabs Daniel Day in the crotch and everyone gets set on fire.  I’d probably watch that version.

Starkwell: It’s pretty clear, from your description, that you haven’t seen the actual version and have no idea what it’s about.

Lovelock: Well, obviously not, since they didn’t do it my way, with the zombies and the flames and the crotch stab.

For some reason, after Mary and Shrink exit the tomb, the kid run towards them in slow motion, and we hear Mary saying “no” and then screaming.  We don’t see anything except the kid running and smiling, so either she is horrified at the prospect of taking care of this child or… honestly I don’t know.  I mean he did have a pretty bad hair cut... Starkwell and Lovelock were completely puzzled by the final scene.  As a movie, this was smack dab in between “Zombi 2” and “The Beyond”.  Not as straightforward, gory and action packed as “Zombie”, but not quite as surreal, atmospheric and horrifying as “The Beyond”.  It’s kind of like a cool band’s sophomore album, that comes in between their energetic debut, and their epic career defining third record, and as a result appears slightly less cool, even if it is still balls out rockin’.
Documented by Kev D. and Posted at 19:10