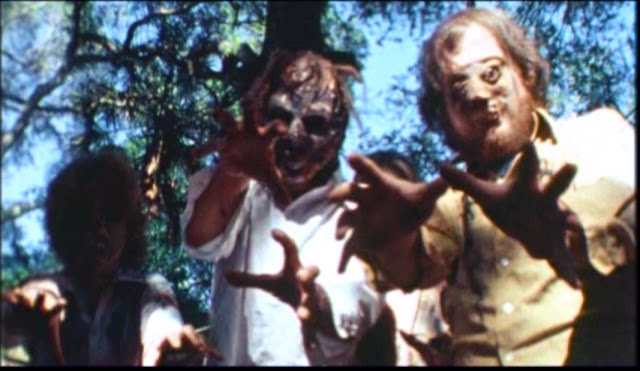 Writer director Fred Olen Ray made several low to no budget trips into quasi-zombie territory, but this was his earliest.  I haven’t heard a whole lot about it other than the fact that it takes place in Florida and that it’s short.  So… yeah.  Starkwell and Lovelock are sure to find more to say about it, and I will be more than happy to fill you in on the highlights.  The DVD is the 25th anniversary edition, if that means anything at all.  Were there any other editions?

[Dude types an article on typewriter reads it as he is writing.]

Starkwell: Does he have to read it as slowly as he writes it?

Lovelock: The movie is already so short… they probably had to find ways to stretch some scenes out.

It cuts to two people talking on a boat in the bayou looking for gators.  The “southern” accent on the female character sounds ultraforced, and the delivery of the dialogue is actually bad enough to become hilarious.  It takes talent to deliver a performance this bad.  It’s so bad that it has a surreal quality to it, and Lovelock and Starkwell are actually upset that she dies within the first minute.  I'm sure there will be more, and given the bad overdubs, that voice might even come back, even if it's visually a different actress.  It’s abundantly clear that all of the trademarks of old backyard horror films will be present: ugly-as-sin lead actors, horrible set design, bad sound mixing, incoherent dialogue and plot, and, of course, awkward cuts.  Lovelock added, “also, fantastic mustaches”.

Starkwell: Wait… what killed her?

Lovelock: It looks as though the shock of being touched by a zombie made blood come out of her mouth… and, I guess, subsequently die.

[We meet another “southern” girl named Shawna Petunia or some shit.]

Starkwell: Is she saying my “Peppy” or my “Pappy”?

Neither Lovelock nor Starkwell know what the Hell is going on, but still continue to laugh at the acting.  A few times, actors screwed up their lines.  I guess these were the best takes that they had.

[Reporter guy stays over at Moron Girl’s house, and her Old Man who can’t read has a theory that giant possums are eating the alligators and people.]

Lovelock: I would never eat anything that these people cook.

[Turns out, they served him possum.]

Lovelock: And that’s why.

Starkwell: Yeah, that’s why.  Actually that is why.

Starkwell: So apparently these “zombies” grab women, lick their necks, grope their breasts and then the women die from bloody mouth?

Starkwell: Did she just say her big dream is to “I don't know, maybe one day eat a hamburger”?

Anyways, they find a dead body and call the cops, and then it awkwardly cuts midway through one of the Reporter’s sentences.  “I’m going to go down there and-" CUT.  Well done.  Anyways, eventually we get more zombie attacks. A dog walks up to dead dude’s torso, licks his exposed intestines, and then a zombie drives pitch fork through old woman and it makes NO SOUND.  The woman makes NO SOUND.  I’ll tell you who made very loud laughing sounds: Lovelock and Starkwell.

[Once again the Reporter and Dingbat are interrupted right before they do sex.  This time, on a boat.]

Lovelock: Those are the third lamest looking lake based zombies I’ve ever seen.

[Two hicks go fishing, a zombie grabs one out of the boat.]

Starkwell: You think the zombie groped him too?

Then for absolutely no reason, other than to show tits, I assume, a girl goes swimming topless in… the swamp?

Lovelock: Who goes swimming topless in the swamp?  In gator country? Alone?

[Policeman sees her car parked, goes to check on her, and instead ends up going Peeping Tom on her from the bushes.  This lasts a minute or two.]

[Zombie pulls her underwater… I think.]

Starkwell: Good thing the officer left right before she died.  Just a quick peak and… GOOD LUCK NOT DYING.

NOTHING IS FUCKING HAPPENING.  But, Lovelock and Starkwell are having a lot of fun making fun of absolutely everything, from the actors, to the music, to the dialogue, to the directing, editing, location, seriously, everything.  There’s a scene where a girl stabs a zombie in the face with an afro pick and green stuff oozes out of his face, then he dies slowly over the course of next two or three minutes.  ON SCREEN.  Then she ends up dying anyway, IN SLOW MOTION while the other zombies pretend to eat her.

Lovelock: If the film maker’s goal was to make me slowly descend into madness, MISSION ACCOMPLISHED.

[Then Lovelock started crying and ran away with his hands over his face.]

Right after Lovelock left, they finally explained that all of this was caused by a meteorite.  They “showed” it, but honestly, Starkwell only knew that’s what the random flash of light was supposed to be because one of the characters actually said “to think, all of this is caused by a meteorite.”  Starkwell subsequently said "meteorite?  I though that was someone lighting a single firework in their backyard..."

[Another half naked girl swims in swamp, gets eaten.]

Starkwell: If you liked the underwater shots from “Zombie Lake” you’ll love “Alien Dead”.   I didn’t, so I don’t.  Also, CLEARLY that one actor playing that zombie is just using this scene as an excuse to hold her wet tank top boob.

Lovelock: Do you blame him?

Then the characters talk to each other for five minutes and explain the whole story.  Good thing too, because Lovelock missed the last time a character explained what was happening out loud.  The zombie mayhem continues as the surviving morons bunker down in some cabin.  The movie definitely has a certain je-ne-sais-quoi… that allows it to be fun, regardless of how much of an absolute piece of shit that it is.  Reporter and Shawna Hotpants end up out on the lake TOTALLY dead, and it ends on a freeze frame of a zombie.

Lovelock: EVERY MOVIE should end on a freeze frame of a zombie popping out of the water.

Starkwell: Not sure every movie could make that work.

Lovelock: Whatever dude, it’s just like when Skeletor came out of the water.

Starkwell: That’s not the first time you’ve referenced that.