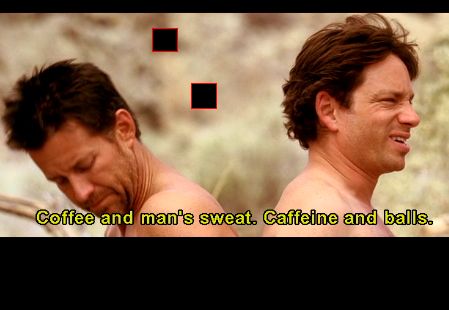 Obviously the director saw "Corky Romano" and thought Chris Kattan would be great in a western.  A western zombie movie.  Yeah, that Chris Kattan.  I almost wanted to make Starkwell and Lovelock watch "Corky Romano" to make them angry going into this sucker, but that wouldn’t be fair to the movie.  Besides, it probably won’t end up needing much help from me to conjure up hate from these two.  I start the movie, and it was already off to a pretty rough start.  We get a few sentences about Geronimo and how he created the White Man’s Curse.  There was a joke mixed in there that fell really flat.  So… yeah… off to a rough start.

[Zombie Farmer, played by Brian Posehn, eats a chicken’s head off.  Daughter throws a pie in his face.  He eats his wife’s brains.]

Starkwell: Says you.  The soundtrack clearly features some of the shittiest country music ever recorded..

As the movie trickled forward, it’s clear that it has that “this was written by a fifteen year old” kind of a feel.  At least that’s what Starkwell said.  The jokes involve things like, for example, a priest yelling “SHOW US YOUR TITS” at the bar dancer hooker girl.  The “name” actors, if James Denton and Chris Kattan are, in fact,  “name” actors, seem like they phoned their performances in.  On drugs.  Somehow, everyone else seems to be trying so hard to act, TOO HARD, that it’s honestly painful to watch.  It’s also clearly not going to be bad enough to become unintentionally funny.  Lovelock said “It’s just treading water in a sea of mediocrity”.  This movie is making him start to sound like Starkwell.

[Zombie Farmer laughs at the sheriff and farts.]

Lovelock: If there’s one thing I hate, it’s laughing and farting zombies.

Starkwell: There is so much more to hate here then just one thing.  I mean, if this is supposed to be a comedy… I feel like someone forgot to tell half of the actors.  But then the other half are in on it, but OOPS they suck at acting.

Lovelock: I think someone forgot to tell the writer it was a comedy.

Starkwell: I think someone forgot to tell the writer to STOP.

[Then the main characters have a drawn out shooting contest.  I think it was supposed to be funny.]

Starkwell: And, that is not.

There are some jokes in the mix that work, and work quite well.  They actually get a solid laugh from the guys.  The problem is many (most) others don’t.  When enough jokes FAIL, eventually even the ones that may have otherwise worked, NO LONGER WORK.

Starkwell seems visibly annoyed at the fact that the evil sheriff and his deputy gang are basically still themselves even when they become zombies, except that they seem to want to eat people.  The zombie farmer from the beginning, on the other hand, is a straight up brainless zombie, eating everyone in sight, including his wife and daughter.  Inconsistencies like this never sit well with Starkwell.

[Priest is hauled up in the bar, eventually gets eaten.]

Starkwell: Obviously the topless prostitute eats him.  But... More importantly, why did they focus on the priest for like fifteen minutes if he was just going to die?

Lovelock: Is the answer good writing?

Lovelock: To make a movie that could have been ten minutes long fill ninety minutes?

Eventually all hell breaks loose, and there’s a decent amount of zombie carnage. The “heroes’” situation is worsened by the fact that head shots don’t seem to work.  Seems that if their arms are cut off, the arms stay alive and wiggly, but now Sexy Native Girl says try and cut the head off, and THAT should do it.  She sounds like she’s making it up as she goes along, which is fitting since, as Starkwell said, “it sounds like the writer was making it up as he was going along too.”

Starkwell: Of course Pocahontas is a great sword fighter.

Lovelock: Dude, more like OF COURSE that random zombie  is a great sword fighter .

The ending makes as little sense as the rest of the movie did.  Plus they make it look like they're setting it up for a sequel.  PLEASE GOD NO.  The last five minutes of the movies is basically the blooper reel.  Which, again, was clearly added in to make the movie actually reach the ninety minute mark.  Everyone loves bloopers right? “Not these bloopers”, says Lovelock.  At least there was more lame country music about ZOMBIES.  Ugh. The film calls itself a ZOMBEDY.   The problem is, it’s not a good zombie movie, nor is it a solid comedy.  As a western, it is straight up PISS POOR.
Documented by Kev D. and Posted at 07:30