The Face of Marble. 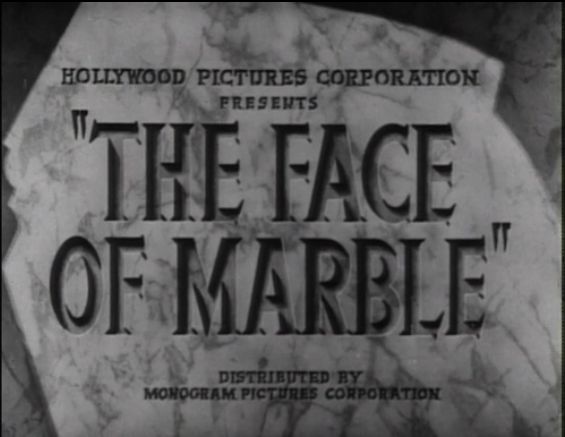 Known in the industry as William “One-Shot” Beaudine, Starkwell and Lovelock know him from their encounter with his earlier moving picture “The Living Ghost”.  Since that was hardly a pleasant experience, Starkwell already has said “let’s see if he’s William ‘One-Shit’ Beaudine, or if indeed, he took many shits and called it cinema.  William "One-Shot / Many-Shits" Beaudine.”  Off to a good start.  Lovelock thinks maybe John Carradine can help this one suck less.  This was filmed sometime in the 1940s, likely in a day, after Beaudine had the opportunity to make a movie centered on Bela Lugosi in a gorilla suit, but long before he shot episodes of "Lassie".  Exactly.

[African American Butler(?) comes to inform Woman of the House, Elaine, of some strange things going down.]

Starkwell: The year was 1946, and racism was alive and well on the big screen.

Lovelock: Did she just say “let the boy speak”?

The quality of the print was worse than atrocious.  The dialogue was muddled and gross sounding and, for some reason, the image on the screen was shaking continuously.  It would be interesting to imagine that this was done on purpose back in the 40s, but clearly it’s just a shitty copy of a film that likely barely exists anymore.

Lovelock: Did he just tell her to “leave us, like a 'good girl'”?

Turns out the two Doctors stole a dead body off the beach from a shipwreck.  They’re seemingly only SLIGHTLY worried whether or not the authorities will be upset that they STOLE A DEAD MAN.  But then they revive said dead guy momentarily, and claim that he has a “face of marble”.  Then he re-dies, and the doctor says “he’s dead, QUITE dead.”  Lovelock and Starkwell laughed hysterically.

[Scientists talk about ‘Maria the Help’ and her “crazy jungle mumbo jumbo”.]

It’s clear that Woman actually is in love with Young Doctor David, instead of her husband, Older Doctor Charles.  Maria the Help has been putting Voodoo Dolls under David’s pillow, trying to curse him into loving Elaine… I think.

[David drops Voodoo Doll into acid, Maria the Help faints and falls down the stairs.]

Starkwell: I wonder how much they paid that old woman for that…

[Dr. Charles killed the dog Brutus, in order to try to revive him.]

Starkwell: WHY in the FUCK would he KILL THE DOG?!?!?!

Lovelock: “Now now, I could try a mouse, or a rat, or, Hell, even a raccoon from the yard, but no, doggone it, let’s try with my wife’s beloved dog.  It worked so well on that sailor yesterday… oh… wait… oops.”

[It doesn’t work… or does it?  They suddenly hear Brutus barking.]

Lovelock: Might be the earliest incarnation of the zombie dog.

Starkwell: He seems mean as Hell.

[Dr. Charles shoots the zombie dog, but he doesn’t die!  Then he JUMPS THROUGH THE WINDOW WITHOUT BREAKING IT, like a ghost.]

Starkwell: A couple of things… why would he have a gun?  Also... walking through walls?

Lovelock: So… super powered zombie dog?  He isn’t harmed by bullets and can traverse through walls.  Eat that, “Resident Evil” dogs.  Also, eat that, “Kitty Pride”.

[Elaine gives Dr. David a huge wet kiss for his birthday, but then his fiancée shows up, and then Elaine gets all sour and bitchy.]

Lovelock: So, Elaine is a bit of a whore… Am I right, guys?

The cop informs us that it turns out the zombie dog has been killing farm animals by biting their throats and draining their blood.  I believe Lovelock’s reaction was “fucking amazing. Walks through walls, can’t die, bloodsucker.  Best dog of all time.  Scooby-Doo?  You know what, fuck Scooby-Doo.”

[Maria the Help tries to kill Fiancée, but ends up killing Elaine instead.]

Starkwell: I love how they aren’t even curious about who killed her.

Lovelock: Hey, all that matters is that now they have a new dog and/or woman to try their SCIENCE on.

Starkwell: Seriously.  Why aren’t they like “HEY WHO KILLED ELAINE”?

Eventually they revive Elaine, and, obviously, she has THE FACE OF MARBLE just like the dead sailor.  "Whatever that means", says Lovelock.  What makes no sense to Starkwell or Lovelock is why they thought it would work at all.  They haven’t changed anything about their formula.  Two days ago they failed to revive a sailor, then they turned a dog into a zombie bloodsucker, now they think WITHOUT CHANGING THEIR FORMULA, that the results will change.

Starkwell: They are the worst scientists ever.

Lovelock: Says you… ZOMBIE DOG for the win.

[Zombie Elaine and Zombie Brutus, apparently now under Maria the Help’s control kill Dr. Charles… by stabbing him in the back.]

Lovelock: Ummm… I was lead to believe that there would be throat tearing and blood sucking…

Starkwell: Wait… so was it the experiment that revived her or voodoo?  What about Brutus?  This is all a real mess…

Lovelock: I feel cheated.  I want my Zombie Dog action.  Fuck you, Beaudine.

What pisses Starkwell off even more is that Elaine wakes up and seems perfectly normal the next day.  So the experiment doesn’t work, then it does on a dog, but turns him into a killer, but then it works on Elaine when combined with Voodoo, but she's being controlled by Maria, but then all of a sudden, so is the dog?  Garbage.  After a HILARIOUS scene where David punches a cop, eventually the Starkwell/Lovelock laughter died down, only for them to realize that the movie had ended.  Apparently Maria killed herself and Zombie Elaine and Zombie Brutus walked into the ocean.  Yes, for real.  Considering that "Face of Marble" was just something that Dr. David said a couple of times, but had absolutely nothing to do with anything, it seems like an odd choice for the film title.  But then again, Ol' Billy "One-Shot" likely wasn't known for making good choices.  Or ones that made any sense.
Documented by Kev D. and Posted at 07:30