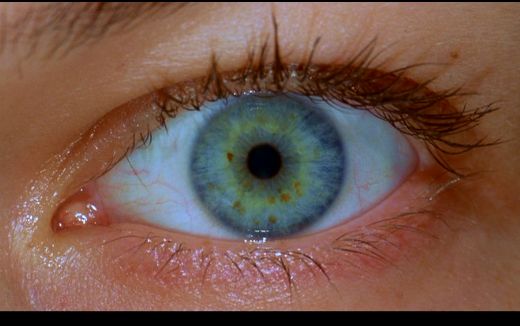 Love it or hate it, Paul Anderson’s “Resident Evil” series likely had a fair amount to do with the resurgence of zombie movies in blockbuster format at the beginning of the 21st century, and its subsequent boom of shitty b-grade trashy zombie camp.  Although none of the "Resident Evil" have really been critical successes, none have truly been flops at the box office, and the series has managed to stay afloat for not one, but five films over ten years.  Starkwell, Lovelock, meet Alice.

[One giant Pharmaceutical Company rules the world, pretty much.]

Starkwell: I thought this was a fictional movie.

[Scientists and employees of the Umbrella Corporation are trapped in research lab, someone released the ZOMBIE gas, or the T-Virus.]

Starkwell: Am I crazy or does the Umbrella corporation only seem to hire really good looking men and women between the ages of twenty-five and thirty?

Lovelock: Would you rather this all look like a real corporation?  Have you seen what people in cubicles look like? They don't look like Milla Jovovich naked, I can tell you that much.

Lovelock: Shut up.  You’re ruining the side boob action.

Then the action packed music kicked in, as well as the pack of action.  Alice and some dude are taken by the Umbrella squad, and they all venture down a tunnel on a train, I assume to get to the super secret lab.  Alice doesn’t remember anything, but has flashes of a wedding to some dude who was hiding in the train’s closet.  It all seems fairly straight forward, and, thankfully according to Lovelock “not a whole hell of a lot like the original video game.”  To be fair, he doesn’t remember much, except that someone therein was a ‘Master of Unlocking’.  Anyways, they were quiet for a while.  It was all fairly by-the-numbers sci-fi horror, but as Starkwell points out “maybe it only seems 'by-the-numbers' because a lot of other movies borrowed from the same gene pool.”

[Lasers head towards some of the hero squad in a hallway, they have to try and manoeuvre around them.  Each wave of lasers is harder than the preceding wave of lasers.]

Lovelock: That’s a little TOO video game-ish… Why would anyone design something like that?  Why wouldn’t they just send the “IMPOSSIBLE TO DODGE” laser combination right off the bat?

Starkwell: Seriously.  And from a FILM MAKING point of view, since they all died anyways, why not just have the first wave kill them all?

What Starkwell and Lovelock DO enjoy is the fast pace, and the fact that the movie doesn’t take long to get going.  They, on the other hand, hate every single thing that Michelle Rodriguez says.  For example, lame things such as something “BITCH AIN’T STANDING NOW.”  Groan times a million.

Lovelock: The zombies don’t look half bad, also, yay for people getting eaten.

[Alice apparently knows how to fight.]

Lovelock: Definitely where “The Bourne Identity” got all of its ideas.

[The team try and fight and shut down the computer, the 'Red Queen', voiced by a young British girl.]

Lovelock:  Were they trying to make the Red Queen this annoying?

Starkwell: I don’t know that I would use my thighs to break the neck of a rabidly contagious zombie…

More zombie mayhem, complete with GUY SACRIFICE staying back to hold the fort after being bitten and stranded, TOUGH CHICK LATINAPANTS who’s been half eaten but still not turning and fighting off the infection, ALICE VON SEXYKILL getting enough memory back to remember that there is a cure, and of course, finally EVIL McPLOT-TWIST shows his true colors.   Starkwell and Lovelock came up with the names.  There’s another character that they just call DUDE BORING.  He’s a scientist I think.

[Mutant thing kills McPLOT-TWIST, starts hunting the group but then…]

[For about another two minutes.]

[Alice wakes up in a facility.  Whole city is fucked.  They set it up for the sequel.]

Lovelock: Every movie should end with Naked and Confused Milla Jovovich.

A fair start to a series of films that would/could go on seemingly forever.
Documented by Kev D. and Posted at 08:15