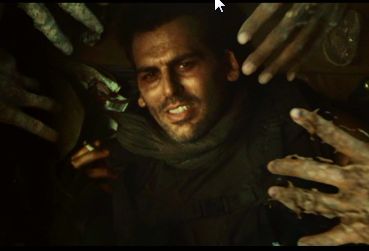 Will all the characers be back, or will they have randomly and inexplicably disappeared?  What will happen with puppet Alice?  How often will Milla Jovovich end up confused and naked, and often times, soaking wet?  Starkwell and Lovelock sit patiently, prepared to do the research necessary to answer these questions and many more, and likely make all sorts of jokes in between.  Let’s see what happens as they see what happens as the DVD explodes into the DVD player and onto the screen.  Like Apocalypse, this was written but not directed by Anderson.  This time, Russell Mulcahy takes the reigns.  He is known, by me, as the dude that directed “Highlander”.  Ready, set, EXTINCTION.

Lovelock: There can be only one!

[Opens with same sequence from the first film of… Milla Jovovich, naked and confused.]

Lovelock: I prefer all new naked and confused footage, but I suppose this counts.

[Scientists dump dead Alice into a pile of dead Alices.]

Then the film explained how the virus was not wiped out when they bombed Racoon City.  The whole world is over run with zombies.  This is all it took for Lovelock to simultaneously cry tears of joy, high five Starkwell and do a roundhouse jump kick while playing air guitar.  He was so into his playing that he missed a scene of Alice killing some drifters that ambushed her.

[Pimp and Carlos are back.  Jill is nowhere to be found.  None of them are traveling with Alice…]

Lovelock: Awwww… but whose gun handling will we be able to make fun of?

Lovelock: I’m just happy that George Harrison Guy is back.

Starkwell: No.  No more, dude.  That actor is ISRAELI… you’re an idiot.

[Then there was a secret meeting with Umbrella corporation people where the head of the table was a dude in shades.  And he is a hologram.]

Starkwell: Why would a holographic image need sunglasses?  In an underground facility no less...

Then there was a scene that pretty much rips off Romero’s “Day of the Dead”.  Maybe he was aiming for HOMAGE.  Anyways, overall, the film is pretty entertaining.  Starkwell and Lovelock watched pretty closely.  It still has its cheesy moments, but is definitely not TRYING as hard as "Apocalypse" did to be overtly cheesy and campy.  I’m paraphrasing from Starkwell.

[Naked Alice clone sits in a tub of water, actual Alice has nightmares.]

Lovelock: Did you see the way the director SEAMLESSLY showed us that she has telekinetic powers AND showed us a naked, confused and soaking wet Alice?

Starkwell: They’re getting better and better at working Naked Milla into different parts of the movie.

Then there was a zombie bird scene, and due to his irrational fear of birds, for the first time in my life, I saw Lovelock closing his eyes during a movie.  Starkwell missed a lot of what was going on, since he was busy ridiculing Lovelock.  A few people got pecked to death, but eventually Alice saved the day with her powers of explosion.

Starkwell: Nice of her to show up and re-join the convoy AFTER that random girl got pecked to death.

Lovelock: Wait... That blonde girl’s name is K-Mart?  Worst post-apocalyptic name ever.   She may as well be named TARGET or GONER… You know who lasts long?  People named SOLITAIRE or DESTRO or TRIXIE or DYNAMITE or NITRO.

Starkwell: I name you VILLAGE IDIOT.

[Claire and her convoy of survivors are HEADING TO VEGAS.  To find gas.]

Lovelock: Vegas will be crawling with zombies.  Shit, even before the apocalypse, half of the performers there were essentially the living dead.

So basically, while in Vegas, the convoy comes across a crate full of fast moving mutant zombies that the Umbrella Scientists left for them.  They bear some resemblance to the crazy zombies in Lenzi’s “Nightmare City”.  Could it be Anderson is paying HOMAGE?  I'm starting to think that maybe Anderson watches the same movies that we do.

Lovelock: I kind of wish that the fats mutant zombies all had machetes.

Most of the convoy dies, including COWBOY, PIMP.  K-Mart lives… proving Lovelock wrong.  At least for now.  Anyways, Alice goes all NINJA and takes out the Umbrella scientists, and there were fistpumps performed all over the Zombie Hall TV room.  Anyways, they need to GET TO THE CHOPPER again, so, in order to infiltrate the secret Umbrella lab and get the chopper, Carlos goes KAMIKAZE and explodes himself in a big truck.  Lovelock cried while humming a George Harrison tune.  Starkwell smacked him in the back of the head.

[The convoy gang gets on the chopper, heads to Alaska.  Alice stays behind to head into the secret lab and finish up with Scientist dude.  Who is now a mutant super being thing.]

Starkwell: Every movie they find a way to up the Naked Milla ante.

Lovelock: I can’t wait to see what they do next time around.

So, Alice takes care of Mutant Dude, and now, she wants to go after Captain Sunglasses in Tokyo.  She is of course going to bring with her, an army of one million Alice clones.  ROLL CREDITS.

Lovelock: Dare to dream.
Documented by Kev D. and Posted at 08:30