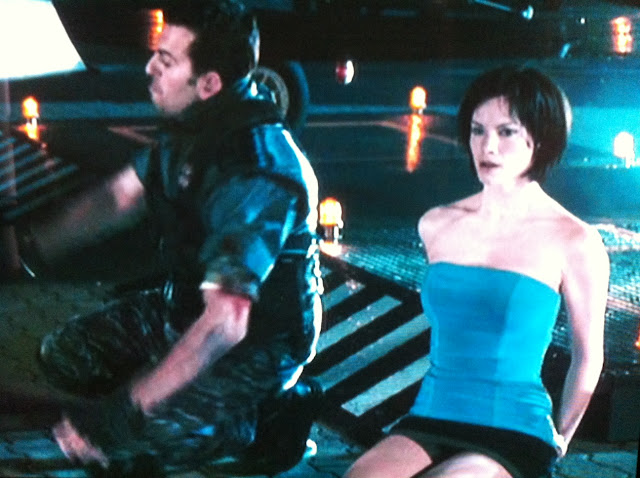 Well, if history has taught us anything, this movie should start with a naked and confused Milla Jovovich.  I guess Paul Anderson likes showing his future wife off.  I should mention though, that while Anderson did write this one, a new director was brought on.  Maybe this will help... I guess we won't know until we get our 'Apocalypse' on.

[Intro is a recap of the entire first movie.]

Lovelock: Dude, we SOoooo could have skipped the first movie.

Starkwell: Maybe I should just skip this one.  Also... sorry dude, but it looks like we won’t get Naked Confused Milla to start this sucker off… Well, that is, unless you count the small shot of her in the recap.

[Jill Valentine is a SEXY COP, who’s OUT TO KICK some ASS.]

Lovelock: Seriously, Jill Valentine is a SEXY COP, who’s OUT TO KICK some ASS.

Starkwell: Looks like we done gots a SEXY COP, and she’s OUT TO KICK some ASS.

[Alice wakes up in some lab… naked.]

There was some pretty solid zombie mayhem.  Racoon City was over run, Starkwell and Lovelock were PUMPED.  Then a dude who looks kind of like George Harrison (according to Lovelock)  jumps out of a chopper shooting zombies in the air, and they laughed HARD.  Lovelock played a kick ass air guitar solo.

They mostly just watched quietly as the story unfolded.  We have one group of survivors including JILL SEXYCOP, her cop friend, a reporter and some dude ('some dude' dies almost immediately).  They’re hauled up in a church, and we get our first view, in this movie, of the super mutant things.  This one is much faster than they were in the first film.  Anyways, I couldn’t always make out what they were saying because they spent a lot of time making fun of the actress playing Jill, and the way she held her gun.

Starkwell: “I’ve got you in my sites big boy.  You have the right to remain SEXY.”

[Alice flies through the window on a motorcycle.]

Starkwell: Good thing we knew she had a motorcycle.

Lovelock: Good thing she knew exactly where they were.

Lovelock: Safety first!  As you crash through a window!

Starkwell: Good thing she picked an ALMOST skimpier and non-functional outfit than Jill is wearing.

Lovelock: Must be a competition.

Lovelock: Do you think this movie is to blame for all of those zombie stripper movies?

Anyways, the heroes venture forward and have managed to keep the interest of Starkwell and Lovelock.  There are quite a few characters in this one, and, unlike the first in the series, they’ve actually kept most of them around past the first half hour of the film.  We assume that the different groups of survivors will all meet up at one point.  Then there was a graveyard scene, where bodies started exploding out of their graves and both Alice and Jill got their SEXYKILL LEGKICK powers on.  I mean, don’t get me wrong, Starkwell and Lovelock were still making fun of it, HARDCORE, but were having an absolute blast and eating mountains of popcorn.

Starkwell: Of course there’s a group of weekend warrior rednecks.

Lovelock: Of course the black guy is a pimp.  And has custom made guns.  And holds them sideways when aiming.

Starkwell: Is it just me or is the NEMESIS view kind of exactly like "Robocop" view?

Lovelock: Dead or alive, you’re coming with me.

Alice splits up from the group to have a one on one battle with NEMESIS.  “A boss battle, if you will”, says Lovelock.  Then Starkwell kicked him in his nuts.  The rest of the group, on a quest to find some British guy’s daughter, meets up with Pimp, obviously, and then with the other group, the chopper-jumping SWAT team, led by the guy that Lovelock says looks like George Harrison.

[Reporter is eaten by a classroom full of zombie children.]

Anderson seems to have no issue with introducing characters and then immediately offing them.  Starkwell and Lovelock both feel that this is an asset.  What isn’t an asset, according to Starkwell is that “Jill’s acting is atrocious” and “most of the animated characters in the video game series are less robotic than her.”  Then they made fun of how a kitchen scene with zombie dogs was a bit of a rip-off of the "Jurassic Park" kitchen scene.

[They have just under an hour to get to a chopper that is leaving Racoon City.]

Starkwell: So… basically… get to the chopper?

Lovelock: You’re doing it wrong… GET TO THA’ CHOPPAH!

Lovelock: Is it just me, or is Alice giving George Harrison Guy her Bedroom Eyes?  I mean “don’t worry… I’m not contagious…” What is that all about?

Then Alice has to fight NEMESIS again.  In front of a crowd.

[NEMESIS is actually BORING DUDE from the first movie.]

Starkwell: Might be the most obvious twist of all time.

[NEMESIS turns into a good guy!]

Starkwell: Might be the second most obvious twist of all time.

Starkwell: Well, she’s on the cover of the next film, so I assume not.

[The Media disguises the incident as a reactor meltdown in the city.  That Unbrella tried to save Racoon City.]

Lovelock: It’s a bit far fetched that people would believe that.

[Alice is alive.  In a lab, in a tank of water (like Luke Skywalker), CONFUSED AND NAKED.]

Starkwell: And everything is right in the world.

Lovelock: How many times can one person wake up confused and naked?

Starkwell: Jovovich is DEFINITELY going for the record.

Anyways, they set up the next film, and I guess Alice will have super powers, also, be a robot, also be a bad guy?  Maybe?  All in all, Starkwell and Lovelock had a lot of fun with this one, and are actually excited for the next one.  Anderson embraced the cheese here, and it certainly worked in his favor.
Documented by Kev D. and Posted at 11:30