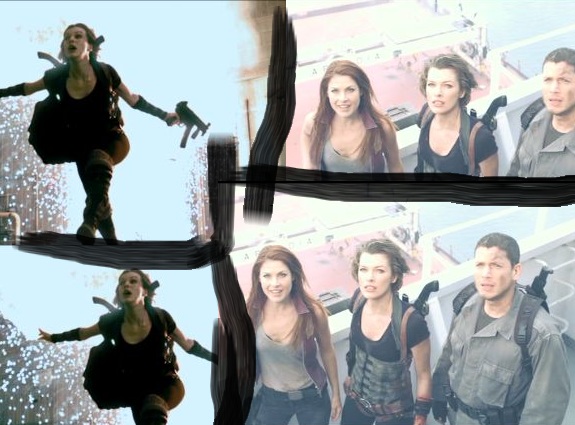 The fourth instalment of the series finds Paul Anderson taking the helm once again as director.  Considering the first film was the only other film that he directed, and it was Starkwell and Lovelock’s LEAST favorite, he certainly has his work cut out for him to get them back on team Anderson.  Granted, even if the story and character development suffer, he can always just launch loads of confused and naked Milla scenes at the audience in a desperate attempt to win them over.  Usually successfully.  I’ve made a point to tell Starkwell and Lovelock that I had them watch all of the “Resident Evil” movies in one week because, in fact, this is not the last film in the series and that the new one JUST CAME OUT IN THEATRES, IN 3D!!!  But then I immediately pulled the rug out from under them and told them that I had no intention to treat them to a night at the theater, so they’d have to wait for a DVD release.  I think I referred to them as “bitches” at one point.  Like “you bitches are gonna have to wait for the DVD, and that shit won’t be in 3D, and you won’t get no damn cool glasses”.  I like keeping their spirits down.  Usually I do that by showing them horrible movies.  This was just more fun.  Ok, let’s get all ‘Afterlifey’ in this mofo.

[Intro is slow motion Japanese people walking with umbrellas in the rain.  One girl has no umbrella.]

Starkwell: In a land of Umbrellas, one girl stands alone.

Lovelock: You were giving Anderson way too much poetic credit there.

After a very brief recap, the secret Tokyo Umbrella lab is invaded by a super powered ninja Alice.  Who then gets shot and killed… but then…

[There are a whole shitload of Super Powered Ninja Alices storming the place.]

Starkwell: I don’t know if it’s specifically because of Captain Sunglasses, or just the way that this is all going down, with all of the slo-mo and martial arty action, but I can’t help but feel like I’m watching a remake of “The Matrix” starring Milla Jovovich.

Lovelock: I think that’s not even the same actor playing Captain Sunglasses… or at least he sounds different.  I can’t quite put my finger on it…

Lovelock: At least Anderson knows his audience... I guess...

Then Alice is made human again… and yet SOMEHOW she immediately survives a plane crash that exploded like the Deth Starr.  Lovelock started laughing, but Starkwell was being a real sourpuss.  I guess he really prefers films without GINORMOUS plot holes.

Starkwell: Alice is… THE RED BARON.

Alice finds Claire, but she was being controlled by some kind of Umbrella Remote Control thing.  Once the thing is destroyed, she doesn’t remember Alice.  Eventually Claire remembers everything.  Seriously, having her memory be temporarily lost served no purpose.  So they go looking for the rest of their crew, trying to piece together what happened in Alaska.  Then they land on a building in Los Angeles, right as they run out of gas.

[Umbrella can hear everything that Alice says.]

Starkwell: How can Alice be that dumb?  She knows they are monitoring her every move...

Lovelock: Well, someone who wakes up naked and confused as often as she does can’t possibly be the sharpest tool in the shed.

Lovelock: Well, this was the first of the series made AFTER they got married… maybe Anderson suddenly didn’t like EVERYONE seeing his wife naked, wet and confused.

[Chris, played by Wentworth Miller, is locked in the Building Gang’s holding cell.]

Lovelock: Pffff… like that little cage can hold Michael Scofield.

[Alice shows off her knives and guns and coin collection.]

Starkwell: Of course she collects coins.

[The Building Gang still has running water, Alice is about to strip and take a shower, but is interrupted by mutant zombies.]

Lovelock: Oh COME ON!!!  Now he’s just teasing us!  It’s like he’s TRYING to remind us that there is no naked, wet and confused Milla in this one.

Anyways, the action pressed on, as the Building Gang tried to find a way out of there.  As usual, Anderson has no trouble killing people off as quickly as he introduces them.  The action scenes are pretty over the top and cheesy, but what else could you expect?

[Alice flies off the roof, swinging on a cable and mows down zombies in mid-air, to a techno soundtrack.]

[Super zombie fights Alice and Claire with some sort of super hammer.]

Starkwell: Where does a zombie get a hammer like that?

Lovelock: I assume the same place Alice got her ‘Red Baron’ plane.

Starkwell: And how would he learn to use it?

Lovelock: Probably at the same school that taught Alice how to jump kick dogs.

Alice, Chris and Claire are the only ones to survive and they eventually make it to the Arcadia, a ship sitting just off the coast of L.A.

[The Arcadia is some sort of SECRET UMBRELLA LAB.]

Starkwell: How many secret labs can one company possibly have?  Every time Alice destroys one and is all “that’s the last of them” it’s all “aw hell no it ain’t”… getting A LITTLE OLD.

Lovelock: You’re getting a little old.

Captain Sunglasses is still alive, and acting all Agent Smithy.  He has zombie dogs that look like they’re from “The Thing”.  Anyways, they fight and eventually it’s the end and it’s happy, OR IS IT!?!?! OBVIOUSLY NOT and so everything is set up for another film.  And there are twists!!  It’s clear that the next film will start with INSTANT EXPLOSIONS OF ACTION.  Starkwell and Lovelock did enjoy this one, but are now even more disappointed about the fact that they can’t see what happens next.  That mixed with Lovelock’s disappointment that we were not treated with a naked and confused Milla has created a grim atmosphere here in the TV room.  Spirits are low.  Good.  They were getting a little too comfortable.
Documented by Kev D. and Posted at 08:15