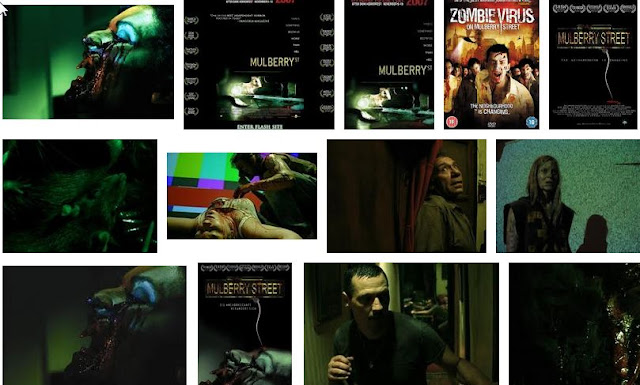 Part of the 2007 “After Dark Horrorfest” releases, “” is apparently a fresh take on the zombie sub-genre.  According to the box.  From the description, it sounds like "C.H.U.D." meets ZOMBIES meets whatever.  The director, Jim Mickle, later went on to write and direct “Stake Land”, which was generally well liked and well received by critics… so that’s promising.  After about seven million previews, we eventually make it to the DVD menu in one piece and I start this sucker.  The film begins with main character, Clutch, jogging around NYC at dawn.  We get glimpses of billboards for some big, likely evil, corporation called CROME, hear talk about protestors in the city, and get some obvious foreshadowing of what’s to come when they show huge inflatable rats.

[We are introduced to some people in Clutch’s apartment building, as well as to his soldier daughter who is coming home... from the war?  Wheelchair Guy, who lives in Clutch's building is to be evicted by the owners of the building, the CROME Corporation...]

Lovelock: What… a… DUMP!  I’d be happy to let the CROME Corporation evict me.

[Also, we see a dead girl in a dumpster outside, bitten to death by rats.  Then Dead Dumpster Girl, back from the dead,  kills wheelchair guy… inside the apartment building... I think.]

The Super of the building picks up a seemingly dead rat.  It bites him.  He throws it to the ground and steps on it.  Lovelock then did a jump kick, overly excited for the promise of rat zombies.  Then the news starts showing reports of rat attacks all across the city which only furthered his desire to perform jump kicks.  Lovelock and Starkwell didn’t have much to say.  They were genuinely interested in the story, the characters, and the direction that the film was heading in.

Lovelock: Isn’t he a little old for puberty… oh wait.

[The rat attacks happening in the subway systems are on the rise.  The entire subway system is shut down.  The city is in a state of emergency.]

Lovelock: See!?!?  If it can happen with rats, it could TOTALLY happen with birds.  Irrational fear of birds has been validated.

Starkwell: You realize this is a movie, right?

Soldier Girl is just trying to get home to see her dad.  She doesn’t really know what’s going on, but there are some genuinely creepy shots of her walking around a deserted park.  Then she picked up an abandoned bicycle and started biking the city.  Starkwell was impressed, he felt tense.  Lovelock was waiting for all Hell to break loose.

[Drunk people sexing in a bar bathroom are eaten by a rat zombie… woman?]

Lovelock: And that’s why I never have sex in a bar bathroom.

Lovelock: Well, that and herpes.  The ol' herps.

Then all Hell officially breaks loose.  As the bar owner kills rat zombies with a frying pan, Lovelock played air guitar and made up a song about rat zombies.  I think he rhymed “eating dudes” and “woman foods” at one point, if that makes ANY sense.  STarkwell, always concerned about continuity, was wondering why the bar people turned rat zombie so quickly, whereas the Super at the apartment, as well as Wheelchair Guy, seem to take a while.

Lovelock: I fucking hate bikers in the city.

Starkwell: Can’t you make an exception here? … I mean, there are no cars… everyone is being eaten.  Rat zombies patrol the city...

Lovelock: Watch, now I bet she’ll do one of those stupid arm signals.  YEAH WE SEE YOU, get off the road!

Soldier Girl is still traveling the city, trying to get to her dad.  Now she has a pickup truck.  Meanwhile Clutch goes to rescue his next door neighbor.  Somewhere in the chaos, Clutch put his fist through a rat zombie’s head.  Lovelock let out a very loud "SHABLAMMO", whatever that means.  Then, quite unexpectedly, Clutch and Neighbor Woman run into Soldier Girl and the Neighbor Woman is eaten immediately.  Whatever Lovelock said at that point was incomprehensible.  It was a mixture of shock, happiness, nervousness and a fart.  It was no shablammo.  As the surviving members of the shithole apartment bunker down into two of the apartments, Starkwell and Lovelock looked visibly STRESSED OUT.

[Basically everyone except Clutch and his daughter are eaten by rat zombies.]

[Right around dawn, a bunch of dudes in HASMAT suits storm the city, armed with… flashlights ?  Flashlight guns?  Clutch dies.  I think HASMATs kill the daughter.]

Starkwell: Wait… bright flashes of light hurt them?  But then wouldn’t the sun have just taken care of them?  Why bother with that if everyone’s dead anyways?

Lovelock: I’m still trying to figure out if they were implying that Clutch and the other guy were gay…

Starkwell: Wait, so was it the CROME Corporation?

There was definite confusion at the end (and throughout much of the film), but a great flick nonetheless.  Fresh take?  Not so much, though.
Documented by Kev D. and Posted at 10:45