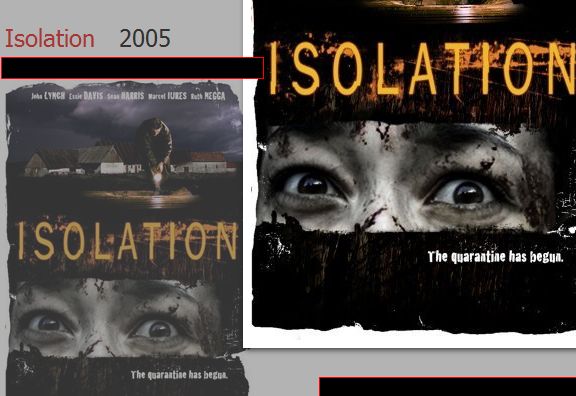 "Isolation" is an Irish film from 2005 that deals with the idea of genetic experiments on cows going TERRIBLY wrong.  This is not a new idea in the sub genre.  In fact, the environmental angle goes pretty far back.  Let’s see if writer / director Billy O’Brien is able to bring something special to the mix.

[Blondie shoves her arm up a pregnant cow’s vagina, something bites it.]

Lovelock: Well now, that’s a fucked up way to begin a movie.

The atmosphere in the movie is already quite grim, as we are introduced to a handful of characters, including a couple of drifters and some kind of evil scientist.  An Irish farm is certainly a spectacular location for filming.  The acting, thus far seems quite good, but as Lovelock has theorized in the past… sometimes accents make the acting seem better than it is.  Starkwell thinks that, in this case, it really is spot on and not just assisted by the lovely accents.

Lovelock: This is the grossest thing ever.

Lovelock: And regardless, I stand by what I said.

The aforementioned disgusting scene, of calf being forcefully extracted from the cow’s unwilling vagina was long and intense.  It also featured Farmer Dan swinging a baby calf around like a lasso.  And then, as expected, he was bitten.  Lovelock and Starkwell were on the edge of their seats.  There were some good scares.  I saw Lovelock jump a few times, although he CLAIMS he had the hiccups.

Veterinarian Orla tried to use some sort of cow killing tool to off the calf, now that they have concluded that the experiment has gone wrong.  She “misses” and mother and calf freak the fuck out.  It is a heartbreaking and disturbing scene, and Lovelock has gone from scared to crying.  He now claims that the hiccups have made his eyes water.  Eventually she finishes the job and conducts a baby cow autopsy.  The effects are remarkable and FUCKING GROSS.  Sometime between smoke spitting out of the calf’s gut and Orla finding still living mutant foetuses inside the baby cow, Starkwell had to run to the bathroom to vomit.  Twice.

[One of the weird centipede alien looking cow foetuses moves.]

[Orla mentions to keep the other animals away from the weird shit, for risk of infection.]

Starkwell: Soooo… Orla and Dan could be infected.

Lovelock: I think I love this movie.  Minus how many times you’ve puked.  And all of the cow vagina.

Apparently the drifters are running from her family.  It’s a forbidden romance angle.  Awesome.  Once Dan finds this out, he lets them fully hide out on his land, so they won’t be found.  Lovelock then repeated Starkwell’s statement about Farmer Dan being the fucking man.

Lovelock: I know I SAID I love this movie, but I want it to go somewhere… something needs to happen… NOW!

[Weird Centipede Alien Cow Foetus Thing crawls into bed with Mary and Jamie and tries to… I think… PENETRATE and/or EAT Mary.]

Lovelock: TOO MUCH! TOO MUCH!

[Evil Scientist says no one can leave and quarantines the farm.  They go searching for these Weird Centipede Alien Cow Foetus Things... in the dark... in the mud.]

After finding Dead Orla, Evil Scienist realizes that the Infected people, infected through a bite, would actually propagate more of these THINGS through the world, and basically wipe out the planet.  Then Evil Scientist uses the cow kill tool on Jamie and explodes his brain.  Lovelock let out a mild shriek.

[Evil Scientist gets the shit eaten out of him by the, now much bigger, mutated Thing.]

Clearly not REALLY a zombie movie in the traditional sense, since the infected people are more like incubators for these horrifying Things (think "Alien" but with mutant cows), the fact that it is spread by the bite was enough to satisfy Lovelock and Starkwell’s test.  Mary eventually found a cow that was oozing these Things out of its vagina every minute or so.  And, since they showed it, with a nice close-up, it was definitely enough to send Starkwell back to the porcelain for another round.  Why did he eat that yogurt after puking the first time, knowing there was still an hour left in the movie?

Lovelock: This movie is fucked.

I won’t spoil the end.  Just take Lovelock’s final statement as a beautiful stamp of approval.  I couldn’t get Starkwell’s final reaction, since he was off hugging the bowl.  The film is not without its problems and unresolved issues (why did it really matter that their love was forbidden, what happened to the experiments... etc.), but it is a good effort and a shockingly gross piece of work.  AND THERE’S A TWIST!
Documented by Kev D. and Posted at 22:40