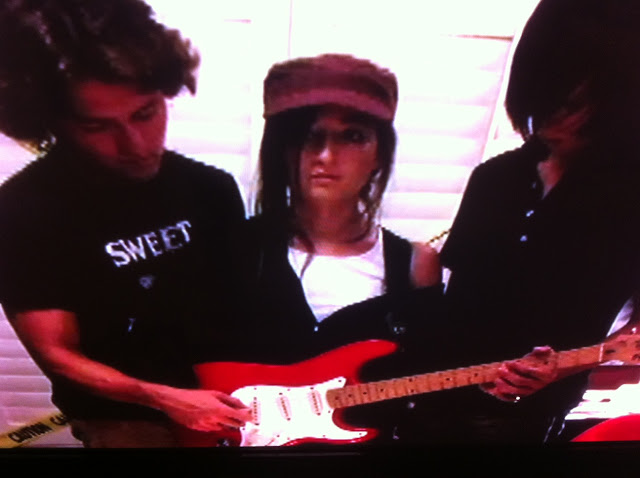 For so long, budget films would go the horror root.  This is generally because sometimes the cheapness actually enhances the overall experience.  Within that lower budget realm, there is also an alarmingly large number of zombie films, especially in recent years.  Occasionally there’s an indie film that tries to do something a little different, give the zombie idea a little spin.  This can sometimes work really well, or, more often, fall on its ass.  Let’s see where Blake Reigle’s “Beneath the Surface” ends up.

[The two main characters are apparently planning to dig up a course.]

Lovelock: It’s nice to see a movie about high school kids where the actors actually look the right age.

Starkwell: I guess… but, when it sounds like it was written by high school kids, and looks like it was shot on a camera they got for Christmas 2004… it's all a little less nice.

They’re poking fun at it, but regardless of the no-budgetness of it, it already is slightly more compelling than most of what comes out of a studios like “Full Moon” or “The Asylum”.  But OUTSIDE of the two main characters… all of the actors are pure garbage.  Starkwell feels that they make the dialogue sound worse than it actually is.  But no, seriously, the acting is horrifying.  It sounds like they are reading the lines for the first time without having any sense of the character or the story.  AT ALL. Those are Starkwell’s words.  I’m paraphrasing.

[“Dude falling in love with girl” montage, between main character, Ethan, and his lady friend, Kayla.]

Lovelock: What was with that fucking shot of that fucking guy with a pacifier in his mouth dancing for a million fucking years?

[The troops are getting restless.]

The “jock” character vowed to cover Kayla in his SEX SAUCE tonight.  And then, Starkwell bailed.  Very quickly.  Lovelock is sticking around because he’s pretty sure that most of these chumps are going to die.  Unfortunately the first death was Kayla, who overdosed, and it happened at the tale end of a very uncomfortable date rape sequence.

Lovelock: It’s fairly obvious that all of the “adults” in this movie are actually related to the people in this movie. Either that or they’re robots.  It’s the only way to explain how horrible they ALL ARE.

[We are thirty minutes in, and nothing has happened, outside of the whole Kayla death.]

They finally cut back to the two main dudes robbing Kayla from her grave and doing some kind of voodoo shit on her to try and wake her up from the dead.  The next morning, she actually wakes up, and Ethan’s reaction is, how did Lovelock put it? ...“The worst acting, maybe ever.”  After saying that he went to go take a dump and said “DON’T PAUSE IT.”  I didn’t… I actually fast forwarded a lot, to avoid staring at this confusing mess for too much longer.

Lovelock: This movie has no business being longer than ten minutes.

Lovelock: [Imitating Starkwell] This movie has no business being longer than NO minutes.

Lovelock: [As himself again] Nice.

[Music video of some band.]

Lovelock: Right… because the movie already TOTALLY had no filler AT ALL.

[Kayla is suddenly under a spell, where she becomes, basically a ninja, and is off to kill the person who wronged her.]

Lovelock: So… basically, it’s “The Crow” without the action, the good directing, dialogue, the good actors, the good soundtrack, the budget, the ET CETERA FOREVER!

Anyways, she finds the dude that killed her, and shoves an exacto knife down his throat and slashed him up with a machete.  It was actually fairly gruesome and effective.  Lovelock just said “TOO LITTLE TOO LATE” got up and left.  I tried to tell him that there were ten minutes left but he was long gone.  He missed, in the last ten minutes, about five million different twists that happened at the end.  None of them made sense.  Having nothing happen for so long, and then bombarding the viewer with a whole shitload of shit, seems shitty. Oh by the way, to answer the question I asked at the beginning... THE TOILET.  That's where "Beneath the Surface" ends up.  FLUSH.
Documented by Kev D. and Posted at 20:55