Planet of the Vampires. 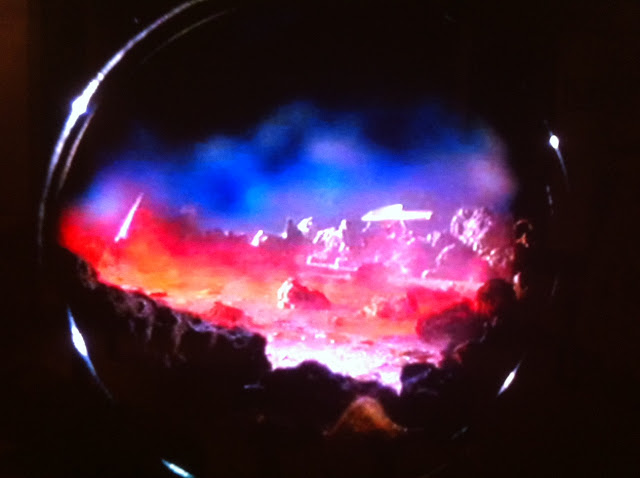 Although it is misleadingly titled "Planet of the Vampires", this 1965 effort from the legendary Mario Bava involves Alien Possession and crew members turning on each other.  I’ve heard tell that this is often considered to be ahead of its time.  I could see why, at least based on the description.  Anyways, we’ll see.  Well, actually, Starkwell and Lovelock will see.  The intro credits featured close-ups on two model spaceships, that were completely immobile, and hanging up in a room painted to look like space.  I had to pause the film for a bit so that they would stp giggling and actually pay attention to the movie.  Off to a good start.

Starkwell: Apparently in the future, the collars will be HUGE!

Lovelock: They kind of look like the X-Men.  But with much bigger collars.

Starkwell: They look like the lamest biker gang of all time.

They made fun, but admitted that the surreal quality of the spaceship and the outfits was actually kind of interesting.  They were talking about how the deck was ENORMOUS, and about how impractical it seemed to make a spaceship huge just for the hell of it… but then it cut back to the model spaceships and the giggling started again.  Through the giggles, the entire ship’s crew seemed to pass out as they landed on the planet.

Starkwell: There aren’t any labels on any of the lights and switches.  Doesn’t seem like a very well-designed control system.

The crew wakes up, half of them start attacking each other.  But then they stop attacking, usually after a good shake, or a slap to the face.  And then as soon as they snapped out of it, someone else goes nuts and starts attacking.  It’s like a horrible game of tag.

[Possessed Doctor leaves ship.  Has trouble breathing, then comes to.  Two crew members come out to retrieve him.]

Starkwell: How come they need to wear those air helmets and the Doctor doesn’t?

Lovelock: Is the answer continuity?

[This is the last time anyone had to wear a helmet on the planet.]

Don’t get me wrong, both Lovelock and Starkwell agree that the sets looks cheap and hilarious, but simultaneously agree that somehow it works and that “they don’t make’em like this anymore.”

[The crew ventures across the planet to locate the other ship, which had sent them a distress signal.]

Starkwell: Now none of them need their little helmets, they only need those little bathing caps?

Lovelock: In the future, people need to breathe… sometimes?

Lovelock: I know I said X-Men before, but now I’m thinking TRON.  They look like they’re in the game.

Starkwell: Well, if the game was showing old dudes’ dickprints, then I think Bava won the gold for this movie.

After finding the other crew and realizing that they had all gone mad and killed each other, the crew goes into panic mode.  They then walk around the planet aimlessly looking for answers.  I think.

Lovelock: Hey, Mario, we get it… there’s a lot of greensmoke and fog on this planet.  Holy shit.

Then there was a scene where the deceased crew members started rising out of their tombs and tearing open the plastic wrap they had been encased in.  Lovelock proceeded to do a backflip while Starkwell did at least three consecutive fistpumps.  After that they high fived.  It was that awesome.

Starkwell:  The collars come off?  Why on Earth would they ever keep them on?

Lovelock: They’re not on Earth, IDIOT.

Starkwell: Was it really necessary to show her making photocopies of the medical records for so long?

Lovelock: He was building tension.

Starkwell: He was building MY IMPATIENCE.

Lovelock: This movie is a solid boredom builder.

Then randomly, the main characters were wearing orange spacesuits instead of the black leather ones.  Likely, because the other outfits were being cleaned that day of filming.  The collars were much smaller.  They kind of looked like Michael Jackson did in "Thriller", or how Eddie Murphy looked in "Raw".  Anyways, they went off to explore some other spaceship that they found, full of HUGE skeletons.  Everything LOOKED really cool.  Starkwell and Lovelock were singing Bava’s praises for how the film looked.  The plot on the other hand is as Starkwell put it “as messy as sneezing with a nosebleed.”  Apparently the alien parasites wanted to travel with them back to their planet and possess everyone.

[Brawl between crew members, half possessed, half normal.]

Starkwell: Honestly, I don’t know who is who anymore.

Lovelock: What happened to the orange outfits?

Starkwell: Is the redhead dead?

Lovelock: What is that bubbling stuff?

Starkwell: Who were those big skeletons?

The questions went on like this for the remainder of this confusing movie.  There was a twist at the end, where the aliens ended up losing their navigation system and ending up going to EARTH!!!!!  Pretty solid twist actually.  Anyways, take a dash of "Alien", sprinkle in some "Ghosts of Mars", pour on a heavy cream of bizarre set design, rip off "Body Snatchers" a little, then remove any and all budget, and you sort of get this movie.  Ahead of its time?  Starkwell and Lovelock seem to think so.  Worth the time spent watching it?  Undecided.  I still think it was fun, but it leaves a really bad aftertaste.  But don’t take my word for it.

Lovelock: ZZZzzzzzzzzz…
Documented by Kev D. and Posted at 23:40