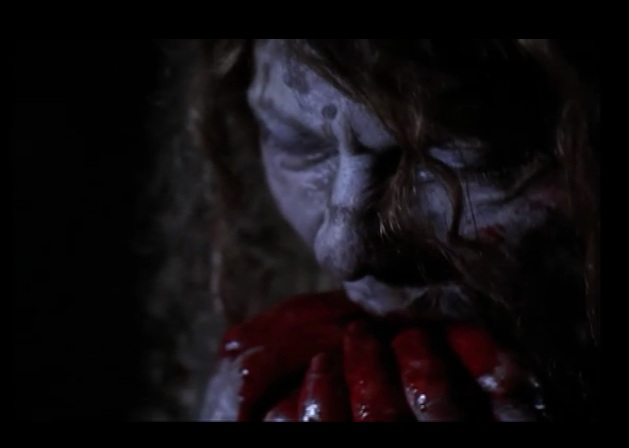 “Masters of Horror” was a relatively short lived television series that produced a mixed bag of shorter horror features helmed by titans of the genre. In the second season, John McNaughton provided the show with an interpretation of Clive Barker’s necromancy filled “Haeckel’s Tale”.

[John tries to convince the ol’ Witch Lady to raise his wife from the dead.]

Starkwell: What is with these “Masters of Horror” episodes? The actors are always so wooden.

Starkwell: Best review ever for a movie. “The old woman’s okay.”

[Flashback to olden Massachusetts where Haeckel argues with Dr. Plunkett about religion, Haeckel claims he can raise the dead and… CUT TO HIS LABORATORY.]

Lovelock: Well yeah, you can’t expect to revive the dead without lightning. What planet are you from?

Starkwell: I bet that happened to Dr. Frankenstein all the time.  At least fifty percent.

The acting was much better now in this flashback sequence. Since this movie is “Haeckel’s Tale”, Lovelock and Starkwell are a little confused as to why it even started with a crotchety old lady and a bad actor talking about times of old. I might have some of this wrong, but I believe one of them said: “It’s Haeckel’s Tale, not ‘The old woman is okay’ and then she talks about Haeckel’s Tale.”

[Professor Montesquino talks about raising the dead, and says that with great power comes responsibility.]

Lovelock: In conclusion, ‘Pawn Shop Guy’ from “The Crow”, AKA ‘Montesquino’ is… THE AMAZING
SPIDERMAN.

Starkwell: I’m pretty sure he isn’t.

Lovelock: Well then what is he?

Starkwell: A dude with a pretty rad moustache.

[Montesquino re-animates a dead dog… INTO A ZOMBIE MONSTER DOG!]

Lovelock: Is he strong? Listen, bud. He’s got radioactive blood.

After that they got bored. And fell asleep. They woke up about fifteen minutes later when there was some thunder and lightning in the movie. But don’t worry, they fell back to sleep quite quickly. They then woke up just in time to see Haeckel fight Zombie Dog with a huge rock. Not bad. Unfortunately Starkwell walked out during the scene when Elise banged her Zombie husband, while the other Zombies watched and joined in.  I think during the third or fourth shot of ZOMBIE HAND TOUCHES NAKED BOOBY, even Lovelock said he was getting a little uncomfortable.

[Later that morning… ELISE’S BABY IS A ZOMBIE BABY! IT KILLS HAECKEL!]

Lovelock: I guess that’s what happens when you have unprotected sex with a zombie.

Starkwell wasn’t around to question how a zombie could possibly have functioning testicles with which to shoot hot zombie beans into a woman's muff. Lovelock didn’t seem to care. He was psyched about Haeckel’s death.

[TURNS OUT THE OLD CROTCHETY WOMAN FROM THE BEGINNING IS ELISE THE ZOMBIE FUCKER!]

Lovelock: Oh snap. Except, I hope they don’t show the old woman having a foursome with the zombies…

They didn’t.  They hinted at it, and that was enough to make Lovelock dry heave a little, but they didn't actually show it.  I guess McNaughton decided THAT would just be weird.
Documented by Kev D. and Posted at 15:55