Masters of Horror: Dance of the Dead. 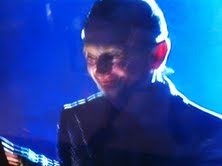 “Masters of Horror” was a relatively short lived television series that produced a mixed bag of shorter horror features helmed by titans of the genre.  In the first season, Tobe Hooper provided the show with the post-apocalyptic effort entitled “Dance of the Dead”.  The first one of these that Starkwell and Lovelock watched was Joe Dante's "Homecoming" which, sadly for them at this point, set the bar exceedingly high.

Starkwell: What the hell was that? A cloud of pure evil?

Lovelock: Did you see their faces melt off?  More like cloud of awesome.

Then it cuts to the DOOM ROOM, which is apparently some kind of anarchistic night club.  According to Starkwell it features “Lame fucking music and Freddy Krueger as an MC with a bunch of make-up on.”

Lovelock: Why is it that any futuristic post-apocalyptic world created in the movies features shitty fucking 'futuristic' bands and music?

We are then introduced to some lame characters that are, for reasons unknown, stealing blood from old people.  We then find out that it was THE TERRORISTS that caused all of this.  Given that Joe Dante’s “Homecoming” was politically charged and very anti-war, I’m starting to think that there’s a recurring theme here amongst these Masters of Horror shorts.  Once they started developing the story more and we saw people throwing naked women zombies into a dumpster and burning them, Starkwell and Lovelock grew a little more quiet, wondering how they were going to find time to explain all of this AND wrap it all up in less than an hour.  They did make several jokes about the bad acting.   The film also seems to be doing a whole “THE YOUTH OF TODAY ARE DAMAGED!” thing.

[Jack goes to find Whatever The Fuck Her Name Is, I think it’s Peggy.]

Starkwell: So… it’s a love story too?

Lovelock: It has everything all at once.

Starkwell: Everything except good acting, good dialogue... my interest.

Then there was an awkward scene where Freddy Krueger felt up a naked corpse before re-animating it.  I mean, things are happening, but nothing is really happening.  Those aren’t my words, they’re Lovelock’s.  There’s also a whole “DRUGS ARE BAD” thing going on.

[The Old Lady goes after Peggy.]

Lovelock: Some movies can pull off showing old ladies waving guns around and saying cocksucker.  This movie is not one of them.

So the two dudes were getting blood to give it to Freddy Krueger at the DOOM ROOM.  We’ve yet to find out what he will use it for.  I’m assuming it has something to do with the whole re-animatings of corpses thingy.  Starkwell almost walked out when they showed Freddy Krueger getting head from a naked zombie, but with only ten minutes left, he figured he may as well stay.

Lovelock: Wait so… the war caused the zombies?

Starkwell: No I think it’s the Freddy Krueger MC guy…

Lovelock: Or, is it just the electric shocks?

Starkwell: Wait… if that’s Peggy's sister, how did she grow up if she’s dead?

Then there’s like a twist where it was the mom that sold the sister to MC Krueger.  And the end.  Well actually, then Peggy turned around and sold her mom to MC Krueger.  But yeah, then the end.  And now Peggy likes the DOOM ROOM?

Starkwell: So what’s the point?

Lovelock: We just wasted an hour.  That’s the point.
Documented by Kev D. and Posted at 13:45