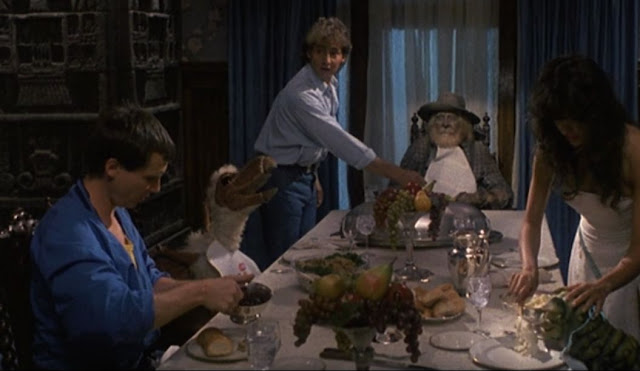 “House II: The Second Story” was written and directed by Ethan Wiley, who actually penned the screenplay for the first “House” movie.  Normally when I see these types of movies that I fear will be “sequel in name only”, I get real scared.  But at least the original writer is back in this case.  That this was one of the last movies of his career, outside of the FIFTH instalment of "Children of the Corn", could in fact mean that this won’t deliver on the same level as the first.  The guys have agreed to give it a shot, after mentally lowering the bar quite a bit.  Although this will certainly help the film, it remains to be seen whether or not it will still manage to disappoint even with such mediocre expectations.

[Quick Draw Cowboy Zombie kills some people in the House, 25 years ago.]

Starkwell: That is definitely not the same house.

Lovelock: It’s the 'Second Story', not the same story.  I do wish that Norm still lived across the street, though.

Then we are introduced to the main character Jesse, his girlfriend and their WACKY friends who come to crash their party at the house.  Anyways, it’s all very eighties.  Then Jesse and Other Dude Named Charlie go dig up Jesse’s Grandfather’s corpse… on a hunch?  Starkwell loses his mind.

[Zombie Grandfather comes out of the grave, and starts talking to them.]

Lovelock: Right… now that he stopped trying to strangle them.

Starkwell: They seem strangely calm, considering they are talking to a zombie… who just tried to kill them.

Lovelock: Well he is a sweet old coot… listen to him… “Call me Gramps!” Awww… how cute.

Then there was a scene where Charlie let Gramps drive Jesse’s sportscar.  And GEE WILLICKERS, WOULDN’T YOU KNOW IT, HE DONE CRASHED IT.  Aw-HeeYUCK.  Anyways, after that, it cut to a shot of Charlie getting tanked with Gramps, and then back to them driving… drunk.

Lovelock: I think more movies need to feature drunk-driving hillbilly zombies that, though they’ve never seen a car before, know EXACTLY how to drive it.  And drive stick, no less.

Starkwell: I really don’t think the average movie could pull that off.

Lovelock: Pfff… EASY.  Santa is actually dead and a zombie and from the south and has been stuck in the North Pole for like a hundred years.  Then he comes back to civilization and gets all crazy.  And the reason he’s in court is for his drunk driving.  The end.

Starkwell: But you just changed the whole movie.  And none of it made any sense.

Then Bill Maher comes in playing a record company guy of some kind, there to check out the bimbo woman that is sleeping with Charlie, who is apparently a musician.  Maher is sporting that fantastic late eighties haircut / mullet that pretty much EVERY stand-up comedian had at that time.  But, I digress, there are an awful lot of “Encino Man” style jokes, where the old Zombie Gramps is all like "what's that? I never seen nothin' like that before" or “all these channels and there ain’t nothin’ on.”  Problem is, just the idea of TV should be making his head explode.  He’s been dead for one hundred and fifty years.  Unfortunately, Starkwell’s head is the only one exploding, due to INSANELY HUGE  PLOT HOLES.  Any movie that makes Lovelock refer to a Pauly Shore movie as ‘more believable’ is in a lot of trouble.

[Random Dude with huge muscles emerges from the study, steals shiny crystal skull, runs away with it.]

Starkwell: Who the fuck was that?

Lovelock: The Ultimate Warrior… I think…

Jesse and Charlie now charged into the study, chasing the Ultimate Warrior.  They do so armed with machine guns... somehow... and they start randomly shooting everywhere in the study, which has now become an endless jungle.  With dinosaurs in it.  Ultimate Warrior is about to stab Charlie when he is eaten by a big mole creature of some kind.  Then a pterodactyl steals the crystal skull and puts it in its nest… with its eggs.  Obviously Jesse has to climb up a huge tree now to retrieve the crystal skull.  Look out for the baby pterodactyl!  Puppet!  He falls and they all end up back in the basement.  But then a weird worm-dog is humping Charlie’s leg.  He’s so cute?  Zombie Gramps is feeding it beer from a bottle?

This speechlessness continued for the next forever minutes.  Mexican Warriors came out of the fireplace to beat the shit outta Gramps, and they still remain speechless and confused.  But then, something broke the silence.

[Cliff from Cheers, playing Bill the electrician, shows up.]

Starkwell: Wait… so Norm was the nosy neighbour in the first one, and now Cliff's the intrusive electrician?

[Bill finds a gateway to another dimension... in the wall.]

Starkwell: Obviously he isn’t shocked by it.

Lovelock: Obviously he has a sword hidden in his toolbox around for just such an occasion.

Starkwell: The occasion being, accompanying two strangers into another dimension armed with swords, on a mission to retrieve a crystal skull?

Lovelock: What other occasion could there be?

The three characters eventually find some kind of temple where a woman is about to be sacrificed.  They stop the sacrifice, and the film appears to be sort of trying to parody “Temple of Doom”.  Starkwell then notes “ironically, this film has a Crystal Skull, which […]”  I’m sure you know where he was going with that.  Anyways, just as the whole family was sitting down for a nice Sunday dinner (Jesse, Zombie Gramps, Charlie, Worm-Dog, Baby Pterodactyl and Mexican Virgin) Slim Razor, Gramps’ old nemesis, rises up out of the lettuce in the party platter in the center of the table.  Jesse chases him around the house, they fight and shit.

Anyways, the cops come and the place eventually gets set on fire, but not before Jesse takes his crystal skull, baby pterodactyl, slime-dog and dead zombie grampa through a gateway to the wild west.  Looks like Charlie and Mexican Virgin are there too!  Everyone time travels!

Starkwell: Wait does that mean he IS his grandfather?

And with that, Lovelock’s brain was finally broken.
Documented by Kev D. and Posted at 12:10