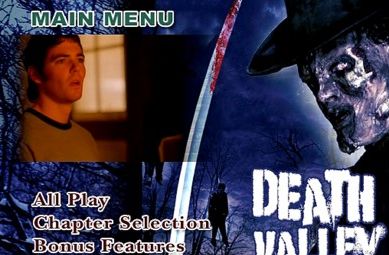 The bulk of his career has been spent as a cinematographer, but in 2004, Byron Werner decided to try his hand at directing a zombie film.  If you group together all the people in the world that have only ever directed ONE movie, I bet at least fifty percent of them made zombie movies.  Why is that?  While I ponder that question, no doubt Starkwell and Lovelock will be asing themselves a million questions about a film that will probably turn out to be a hot mess.  Welcome to “Death Valley”.  Don’t tell the guys, but this is yet another Asylum production.  Seriously, how many zombie movies have they made?  Probably one for every two-headed shark movie that they've made.  How many of them are on Netflix?

Starkwell: Did the movie start or is this a music video for a band that I hope has already stopped making music forever?

Lovelock: What’s with all of the lame gimmicky camera stuff? The flashy cuts, speed up slow down, grainylook, FILTERS!  SEPIA TONE!

Starkwell: Well he is a cinematographer, maybe he’s trying to do everything in the book within the first five minutes.  You know like when a drummer releases a solo album and it’s all drum heavy and shit?

Lovelock:  I guess.  Holy shit, the bad music is STILL PLAYING.  It’s been like five minutes.

Eventually the lame “rock” music stopped and was replaced by an enormously over the top and out of place orchestral score.

[Dealer arrives in ghost town, goes to bar, sees a zombie bartender, IMMEDIATELY SHOOTS HIM IN THE HEAD.]

Starkwell: So… there was no “hey are you alright buddy”?

Lovelock: Nope... it was more like “GROSS! FUCKING SHOOT IT.”

Starkwell: So what was the point of any of that?  Why show the cop chasing him?

Lovelock: Oh god I hope that’s the end of the movie.

[Lame opening credits start.  EVEN WORSE MUSIC THAN BEFORE.]

Then we are introduced to a debate team.  The coach looks younger than the students, and the students all look like they’d never be on a debate team.  Then they drive off for a debate competition and MORE MUSIC PLAYS!  But wait!  They get hijacked!  By the Dealer dude’s partner!  More music!  And obviously Criminal 2 takes them to ghost town / sunset valley / death valley.

[Nerdy Guy says he’s heard of this place, that it has more than just ghosts.]

Starkwell: How would he know about this place?

[Original Dealer Dude jumps out at them, warns them, then turns all KERAZY then tries to eat Nerdy Guy.]

Starkwell: When Bloody Bill ripped out Dealer Dude's throat earlier in the movie, did he replace it with an amplifier and an effects pedal?  Because his voice is a little off…

Then there was a big zombie montage, and to my surprise, Lovelock hated it.  Hated it times a million.  Uh oh, looks like Starkwell just left.  Just in time to miss Nerdy Guy recount the legend of Bloody Bill, and for the director to show the WORST flashback scene ever.  The director was going for that “FAKE GRAINY DAMAGED OLD FILM LOOK”, but it was so overdone, that you couldn’t see anything that was happening.

Over the course of the next forever, the only good thing that Lovelock had to say about the movie was “at least they stopped playing the shitty rock songs and doing the whole ‘it’s a movie AND a music video’ thing”.  That statement was only true for about five more minutes.  Because then they started shooting zombies and it was all like “baby baby are you ready rock yeah ooh yeah baby baby”… So  ANYWAYS... everyone dies and then Nerdy Girl cuts off Bloody Bill’s head with a sword.  And then she walks off into the desert.

Lovelock: Maybe she’ll see the cop from the beginning.  Hopefully they were saving that for a sequel.  Not.

The ending credits start rolling and Lovelock ran away top speed before he could hear even one note of what would certainly be the worst song ever.  There are about six or seven songs in this movie, and according to Lovelock “they might be the six or seven worst songs I’ve ever heard”.  Maybe it’s just because he hated the movie so much.
Documented by Kev D. and Posted at 22:15