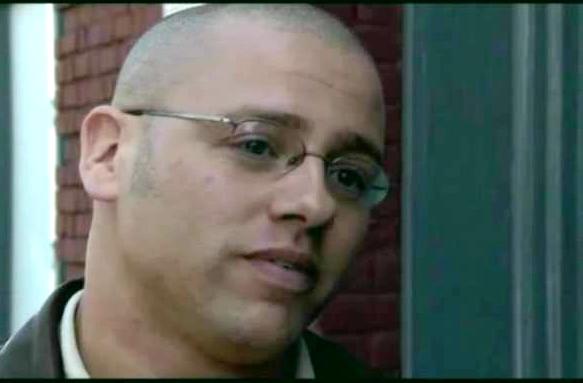 Some sort of gangsta film about zombie monsters interrupting some guys trying to rob a bank, “Dead Heist” promises to be a challenging watch for the guys.  I mean the star is BIG DADDY KANE.  The bright side is that it isn’t very long.

Lovelock: This sort of looks like the worst music video you’ve ever seen.

Starkwell was IMMEDIATELY annoyed by the useless curse words inserted everywhere in the dialogue, and BOTH Lovelock and Starkwell wished that the film had not included the bald white guy who, for whatever reason, is trying to sound like a tough black guy, unconvincingly.

[Four dudes plan a bank heist at a coffee shop.]

Lovelock: These four dudes are dumb as balls.

Starkwell: And the acting is not helping this be any more convincing.

[They go to see their friend Hustle, the pornographer.]

Lovelock: What? No… ummm… whatever.

Lovelock: Holy shit this movie is really bad.  Also, where are the zombies?

Starkwell: There’s just so much useful dialogue.  Not.

Starkwell: Why would you walk up to a random guy shopping for hunting knives and tell him about zombies?

Lovelock: To be nice?

Lovelock: Because this movie makes no sense and sucks?

[They try and rob bank.]

Starkwell: So, let me get this straight, even though they are there with guns, the cop woman is able to walk ten feet over to the desk, set off the silent alarm, return to the place she was, ten feet away, and no one saw her?  Fuck this.  I’m out.

Lovelock: But we haven’t even seen the zombies yet.

Lovelock: Hopefully most of these characters won't.

Just in time to miss them shoot two random people, and what appears to be some kind of love story between the cop lady and Lame Whiteboy.

I believe Lovelock is only holding on to see what the zombies are.  And there they are!  But considering we are two thirds through the movie, it’s beginning to feel a little late for a new element. Especially one that makes no sense.

Lovelock: There were more people than that in the bank, but now all of a sudden there are only the main characters.  What a farce.  I guess they could only afford five actors at once.

Anyways, then Lovelock fell asleep.  All he missed in the last twenty minutes was bad dialogue and the dumbest fucking plot ever.  Oh, also, Lame Whiteboy’s ‘accent’ keeps going in and out.
Documented by Kev D. and Posted at 21:40