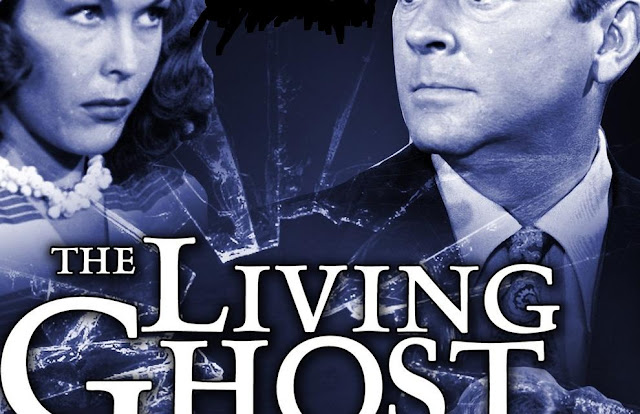 Although the title leads one to believe that maybe this is a ghost movie, rather than an old fashioned zombie romp, the story here apparently involves a man in a zombie-like state.  Not really dead, not really alive, and most likely, not really entertaining either.  But that doesn’t mean that Starkwell and Lovelock won’t at least find SOMETHING to talk about.  The movie’s only about an hour long, so at least there may be less DEAD air to fill.  See what I did there?

[The British Board of films informs us that this is rated ‘A’, for adult.]

Lovelock: ‘A’ for adult?  What kind of rating system is that?  And why ‘British’?  The film is American.

Starkwell: I can already tell I’m giving this an ‘F’.

Starkwell: What the fuck is even going on?

Lovelock: I think someone is missing.  And people want to look for him.

Then two characters visit some ‘doctor’ or ‘psychic’ or ‘medium’ or something.  Whatever.  He has a towel on his head.  His name is NICK TRAYNE.

[Girl tries to use reverse psychology on the ‘psychic’ to convince him to TAKE THE CASE.  And it works.]

Starkwell: You’d think he wouldn’t be so easily manipulated, given that he's some kind of psychic and shit.

Lovelock: The important thing to note is that he just told the girl that he wanted to bend her over his knee.  I assume to spank her.  In fact he PROMISED he would.

Starkwell: No wonder it was rated ‘A’.

Lovelock: Did he just ask when he would be ‘getting off’?

[The missing Mr. Craig shows back up at the house, as a vegetable lasagna zombie.  Old woman screams and wakes everyone up.  Like a dozen people run out into the foyer...]

Lovelock: How many people live in this house?

Starkwell: I still don’t know what the hell is going on.

Then the two sat bored.  Really bored.  The dialogue was awkward.  There were so many characters on the screen at certain moments that they weren’t even sure who was who and who was even talking.  Some of the dialogue felt ad-libbed.  It didn’t help make anything any more interesting.  Honestly, neither Starkwell nor Lovelock are really sure who any of the characters are.  I think one’s a doctor, one’s a psychic.  There are definitely a few loonies in the mix…

Lovelock: Wake me up if something happens.

Nothing happened.  I mean, there were lots of people interacting, but it was one hell of a mess.  I mean, they tried to explain everything, but the explanation was totally insane.  The important thing is the film ends with Nick Trayne spanking the girl.  Just like he promised he would.

Starkwell: Rated ‘A’ for ass spanking.