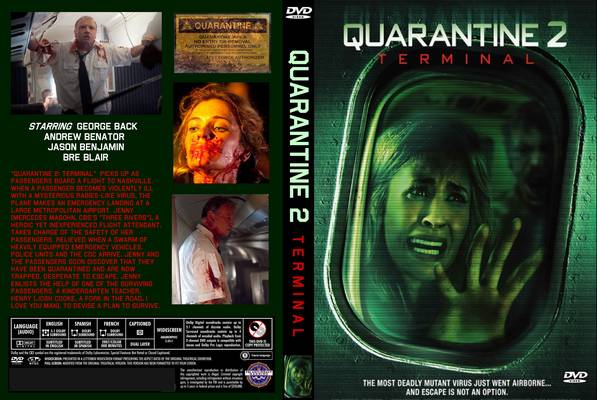 The first "Quarantine" was a carbon copy of the Spanish film "REC".  While the actual Spanish sequel to "REC" apparently picks up right where the first one left off, this film has absolutely nothing to do with anything ever.  Or so I’m told.  I feel like they must have seen how GREAT "Flight of the Living Dead" turned out and thought, yeah, let’s do that shit on a plane, and then they'll be stuck in a terminal... DIE HARD STYLE.  That has to be how these people think.  Anyways, let’s see what Starkwell and Lovelock think.

[Opening shot, stewardesses in a taxi, one of whom is putting her shirt back on.]

Starkwell: What is the need to show her with her shirt unbuttoned?

Lovelock: Obviously we need to establish that they are in a rush.  Or that she has boobies.  Whichever.

[The stewardess shows her friend her autographed copy of the new “Band of Horses” album.  And pictures of her with the band.]

Lovelock: If anything that product placement hinders the band and their album.

Starkwell: And a fat guy.

Lovelock: And the stewardesses are all SEXY and wanting to get all SEXYSEX with the passengers that they deem to be SEXWORTHY.

It’s honestly not horrible, at least the film is keeping them guessing as to who the virus will originate from.   There’s a decent amount of characters, but it’s a small enough plane that it’s not too over the top.  The movie isn’t wasting too much time trying to develop characters.  Starkwell was like “it feels like the film knows that its characters are lame”.

[PhD guy, lets call him PhDude, is watching the news, and there is a story about an apartment building being quarantined.  Fat Guy turns into a rabid lunatic.]

Starkwell: Wait, so they tie it in to the first movie by showing the building, but then they make the actual infected people look and act completely differently?

Lovelock: I smell a “SEQUEL IN NAME ONLY” type of a deal here.

The plane lands and the passengers end up in some weird part of the terminal and are placed under quarantine by army.  Or by police.  Or something.  Starkwell and Lovelock were mostly quiet as the film was playing out.  I mean, don’t get me wrong, there were definitely a few places where Starkwell pointed out plotholes the size of Canada, but other than that, they weren’t saying a whole lot.  This could also be because not a whole lot was even happening.  Around the halfway point, it starts to finally pick up some steam.  Not enough to really spark much conversation though.

[Stormtroopers go into quarantined area.  Shit goes down, and then they aren’t let back out.  They bust out and are gunned down by their own people instantaneously.]

Starkwell: Why would they ever go into the quarantined area if it’s so obvious that they won’t be let out?

Lovelock: For fun I guess.

Lovelock: I don’t know.  Certainly not ours.

Starkwell: That whole scene was pointless.  Maybe the most pointless ever.

Teacher Scientist PhDude ends up being all evil and in on it and shit.  None of the virus explanation really makes any sense with regards to the original story.   It completely changes the whole thing around.  It would be like if someone other than Romero made a sequel to "Day of the Dead" and totally made up their own origin for the zombie apocalypse.   Sounds familiar.  I mentioned this to Starkwell, and he just yelled out “CONTAGIUM!!!!!!!!!!!!!!” and ran out of the room crying.  MOving on.  Honestly, not even the gross out factor of a dude sticking a needle in his eye is going to make Lovelock hate this any less.

Lovelock: Of course the twelve year old kid knows how to use night vision goggles and that hand gun.  And his aim is perfect.

There was one shot near the end when Stewardess smashed PhDude’s head in, which was pretty sweet.  But that’s about it, really.

After like five more minutes of the kid crying through his night vision goggles, he escapes.  And then it shows that the kid’s in Vegas.  I’m not sure if this is to imply that they want to make a follow-up called something like “Quarantine 3: Double-Down”.  But I can name at least two people who won’t want to see it if they do.  Good thing they don’t have a choice.  I makes the rules.
Documented by Kev D. and Posted at 21:20