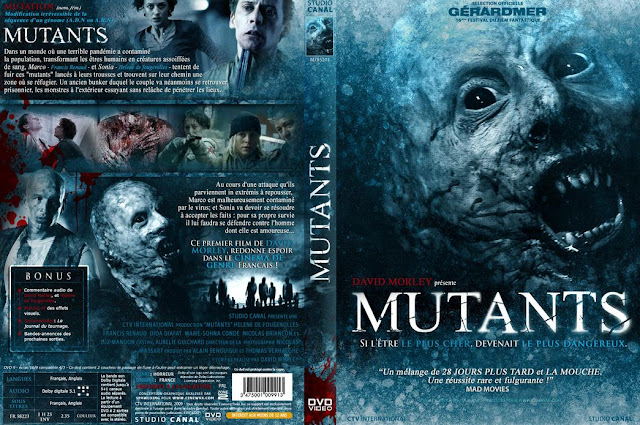 While combining dramatic love and zombies isn’t necessarily new, perhaps this French film from 2009 will have an original take on it.  French is the language of love, after all.  Lovelock is just happy it’s a language that he speaks, so that, even though this is not an English language film, he is not forced to read subtitles.  He doesn’t like reading much, especially if it takes away from the watching of the action on camera. After a cool intro explaining that most of the population has been wiped out by the virus, we begin.

[Girl wanders through forest of zombies and gets exploded by an ambulance.]

Lovelock: I thought that girl was going to be a character in the movie and then BAM, hit by a car and explodes.  Way to go, movie.

Starkwell: Dare I say that the film has an explosive beginning?

Lovelock: This one already looks better than most, so don’t ruin it with you stupid stupid.

Lovelock: So wait, was the kid infected or just autistic?

Starkwell: Not sure exactly… a little hard to tell… is Marco infected or just shot?

Lovelock: Sonia shot that bitch in the head.  Sonia is awesome.

Slightly confused and heavily stressed out, Lovelock and Starkwell sit on the edge of their seats, captivated by the film, and already totally caring about the main couple Sonia and Marco.  As Starkwell said “it’s not easy for a film to make me care about characters this quickly”.

[Sonia and her man are hauled up in a hospital, seems like he is infected.]

Lovelock: “Mon amour?”  Is this a fucking love story?

Starkwell: Only you would worry about that.

[Marco’s BULLET wound has healed overnight, a sign that he is a MUTANT!]

Lovelock: Wait, she’s denying it?  Love is blind I guess.

Starkwell: I don’t think that’s what they mean when they say that.

Starkwell: Dude, she can’t just leave… she loves him.

[Sonia is immune, it would seem.]

Lovelock: I swear if it ends up that LOVE is the antidote I’m going to puke all over your head sir.

There was a scene where Marco was crouched in front of the toilet, with his hair looking all patchy, pulling out his teeth and spitting blood into the bowl.  Starkwell just sat with his eyes wide open and yelled out “GROSS”.  The loud noise startled Lovelock, who proceeded to let out a nervous fart.

[Marco is acting insane, and wants more morphine.  Stung out, he attacks her, pulls a gun on her, then goes and pees blood.]

Lovelock: That’s why I say no to drugs.

As the infection spreads more and more within Marco, the acting, writing and visual effects are so incredible and convincing that Starkwell and Lovelock sit there GLUED to the tube, occasionally letting out gasps of shock and horror as Marco chases and tries to, basically, kill Sonia.  Still Sonia won’t give up on him.

Starkwell: She gives a whole new meaning to that song “Stand By Your Man”.

Lovelock: If you ask me she brings a whole new meaning to the word STUPID IDIOT FACE.

Apparently some bad dudes, let's call them Frank, Frank's Girlfriend and Machete, heard Sonia over the radio when she was trying to contact the army, and now they have joined her.  Lovelock let out a solid, loud and lengthy “boo”.

Starkwell: If that’s why she’s immune, then you were partially right, being in love could have something to do with immunity.

Lovelock: Only if you’re a woman though.  What a sexist movie.

[Machete kills a mutant with his bare hands and a hook.]

Lovelock: Sonia has just been demoted. Machete is my new favourite character in this movie.

Lovelock: Ok Sonia, looks like you’re back on top.

The bad guy starts beating the shit out of Sonia, due to her betrayal, and Mutant Marco lets out some kind of war cry that attracts all of the mutants in the forest to come and kill everyone.

[Bad Guy Frank sets off a smoke bomb in the hallway, mutants come through the smoke seemingly out of nowhere.]

Starkwell: Reducing your own visibility in a fight against super strong mutant killer things… not your best plan ever.

[Frank closes his girlfriend in the smoky room with a mutant.  She dies.]

[Mutant Marco saves her as she tries to GET TO THE CHOPPER!]

Starkwell: I guess he can feel the baby inside her…

Lovelock: Enough of this lovey dovey shit, GET TO THA CHOPPAH!

Lovelock: BAM!  In your face, love!

Starkwell: I think you missed the point.

Starkwell: She didn't say that.

Lovelock: She should have.

She makes it to the chopper and the crowd goes wild.  Seems like this was the director’s first, and thus far his only, full length film.  Hopefully he makes more, but if he doesn’t, it might be alright, you know, quit while you’re ahead.
Documented by Kev D. and Posted at 16:45