Last of the Living. 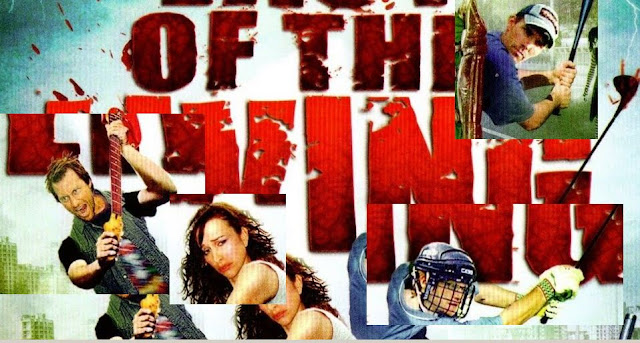 New Zealand has already made its mark on the zombie genre.   But does New Zealand have more to offer?  This 2009 effort from first time, and thus far only time, writer-director Logan McMillan has some pretty big New Zealandy shoes to fill.  PLAY MOVIE!!!!!!!!!!!

Lovelock: I don’t know if it’s just the accents, but I already love these dudes.

Starkwell: It may be the accents.

[Character makes a fuss about needing a bookmark rather than folding the corner of the page.  During a zombie apocalypse.]

The soundtrack was already getting on Starkwell’s nerves, but it’s not necessarily a deal breaker.  Lovelock already made a comment about how the zombie and blood effects so far are terrible… but “if the characters hold up, it won’t really matter.”  Starkwell agreed, saying “character and story are number one, the rest is just bonus if it’s any good.”

Lovelock: Probably the first place that I would loot too.

Starkwell: Jesus, you weren’t lying when you said that the effects were garbage.

Lovelock: Seriously, is that a zombie priest or a carnival clown or... ?

Lovelock: I love that he keeps trying it out.

Lovelock: Best thing since the foot sweep in “Napoleon Dynamite.”

So after picking up Stef, they join her in her plot to get a zombie blood sample back to the scientist island and save the world.   They'll have to get there by plane... Ash flies apparently.  Pretty convenient.  Starkwell and Lovelock were pretty quiet.  They were laughing here and there, because the jokes were actually funny.  The film clearly owes a lot to “Shaun of the Dead” and other recent zombie comedies, but it’s not like it’s a blatant rip-off of anything…

[Ash gives Morgan shit about how badly he treats women.]

Lovelock: Ash is the best.

[Johnny gets bitten, says he’ll be a decoy for them, so they can get away.]

Lovelock: Awwww man… that’s the only problem with a movie having characters that I actually like… when they die it’s really sad.

Lovelock: What? No, it’s just eye sweat, from being so manly.

There was this really dragged out driving sequence that annoyed Starkwell.  He keeps claiming that the movie is good, but “some of the director’s choices are preventing it from being REALLY good.”  Lovelock told him he was being a jackass.  But then there was a shot of a zombie saying “brains” and then farting, and Lovelock was all “yeah, maybe you’re right.”

Lovelock: Movies really have a tendency to make flying a plane and landing it ridiculously easy.

Lovelock: Lesson number one, never go to a small island in a zombie apocalypse scenario.

Outside of a HUGE plothole wherein Morgan turns IMMEDIATELY into a zombie, even though Stef the scientist said earlier in the film that it takes an hour to turn, the movie was perfectly alright.  Starkwell claims that at that moment they jumped the shark, Lovelock disagreed.  Cookie cutter stuff, but well worth a watch.
Documented by Kev D. and Posted at 08:55