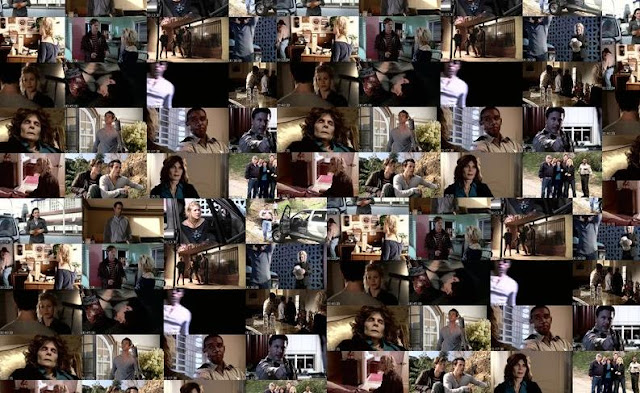 Although it’s nice to see that no-budget movies are alive and well even in our current decade and economy… the fact that it is cheaper to make movies, means everyone with a camera and a Mac thinks they’re the next Tarantino or some shit.  Also, it means that there is a whole lot of crap out there.  And since no-budget filmmakers often lean towards the horror genre, and more specifically, the zombie genre, Lovelock and Starkwell have had their share of turds to sift through.  Occasionally there is a diamond hidden in the turds.  Granted, the diamond is still covered with turdness, but a gem nonetheless.  The opening credits certainly aren’t making this one look very polished.

Starkwell: In the distant future, the landscape looks like it was designed on a computer by a high-school student.

Starkwell: In the distant future, the monorail in the distance looks blurry.

This went on for a while. My favorite one had to do with people dressing like it's "The Matrix".

[Rando Woman visits other random Old Woman in an institution, she talks about the plague of ‘09.  The old woman is played by someone who looks like a college student.]

Then the movie flashed back to 2009, and they spent an incredibly long and dragged out amount of time establishing the characters.  Sometimes this is something that Starkwell would appreciate, but in this case, he seems more bored than anything else.

Starkwell: I think you could see the string dragging the worm across the ground.

Lovelock: What?! Rewind! I wanna see.

Starkwell: No, please, we’ve already lost too much time that we’ll never get back.

[Billy and his gang show up to BEAT UP recently released from prison Deke.]

Starkwell: The ‘gang’ looks like three lame white dudes coming back from a round of golf.

[Pantleg Weirdo shoots a worm from his mouth into one of the Golf Buddies’ mouths.]

Lovelock: That looked like a gummy worm.  In the shape of a penis.

Anyways, so Deke is arrested, and then the Golf Get-Along Gang come by all possessed and shit, and help Deke look even more crazy.  Plus Pantleg Wormcrawl has turned up dead, so they assume it’s Deke.  I believe Starkwell already said, at least three times “what a fucking mess.”

Starkwell: The actors constantly look like they’re about to laugh.  Like they just can’t contain how excited they are to be in a movie… Spoiler alert guys, you’re movie ends up sucking, and none of your careers go anywhere.

So far no 'real' zombies, more of a Body Snatchers type of a thing.  Lovelock seems like his patience is slowly being drained.

Starkwell: If you take “Slither”, and take away all the good dialogue, good acting, good pacing, good effects, and good music… you’d still end up with something infinitely better than what we are currently watching.

Lovelock: It takes a special kind of movie to make forty-five minutes feel like three hours.

Lovelock: You could fit this whole movie into a ten minute short film.

I wasn’t really following the movie, or the guys’ conversation at this point.  I think Lovelock got up to take a dump, and it appears that Starkwell is browsing the internet on his laptop.

Starkwell: I’ve seen better acting in an instructional video about the anti-lock brake system in my car.

Lovelock: Probably had a more interesting story as well.

They aren’t exaggerating.  The end.

[In the future, the old lady version of Sarah gets a visit from Deke?]

Lovelock: Hahahahahah!!!! In the distant future, people ride on Segues.

Starkwell: Why was the whole movie a flashback?

Lovelock: Holy shit, they left the ending open for a sequel.

Starkwell: It takes a lot of nerve to name your shitty movie “The Invasion Begins”.

Lovelock: I think that for most of the cast and crew it should have been called “My Career Ends”.

Lovelock: In the distant future, the sequel never gets made.