Dance of the Dead. 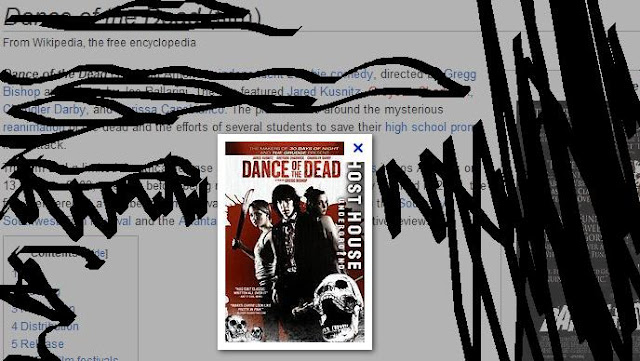 It would seem like zombie comedies are a dime a dozen now.  For every “Shaun of the Dead” or “Zombieland”, there are a dozen or so “Dead and Breakfast” level movies.  According to the box, this movie seems to have won awards at various things.  Anyways, let’s see where this one ends up falling, according to Mr. Starkwell and Mr. Lovelock.

[Gravedigger collects limbs of dead people that have been attacking him.]

Starkwell: So even if the limbs are cut off they still move?

For the next little while, we are introduced to various characters.  It seems to be a typical high-school comedy.  Typical characters.  The jocks, cheerleaders, punks, class clowns, nerds, bla bla bla…  Starkwell and Lovelock seemed somewhat uninterested, but at the same time, seemed hopeful from the opening scene.  The dialogue wasn’t terrible, and Lovelock felt that “it had the feel of those campy eighties high school films”.

Starkwell: The “BRAINS” is a nice shout-out to “Return”.

Lovelock: I think the Prom is about to get all fucked up.

Lovelock: Did he just elbow drop that zombie?

Starkwell seemed pissed off that the nerds were making jokes and seemed calm, even though their friend was just eaten.  Also that apparently the mindless zombies can drive cars.  Lovelock, on the other hand, was having a grand ol’ time.  Eating popcorn and feelin’ fine.  As time goes on though, Starkwell seems to be coming around.

[Kyle, the tough RUDE DUDE, saves one of the nerds, then dies.]

Starkwell: They’re crying over Kyle, but when Rod was eaten in the cemetery they were cracking jokes.  What the fuck?

Starkwell: Of course there’s a gym teacher that has a stockpile of guns and a hummer, and they obviously meet up with him.

They didn’t say a whole hell of a lot for the rest of the movie.  It was a decent movie.  The jokes usually work, which is rare for this type of film.  It doesn’t offer any scares, but I don’t think it’s supposed to.  Starkwell came close to walking out when the Cheerleader and Steven started making out and then eating each other as they turned zombie, but he said “I’m glad I stayed” once he saw the whole thing through to the end.  That's about as good a stamp of approval as any of these movies can hope to get here.
Documented by Kev D. and Posted at 21:25