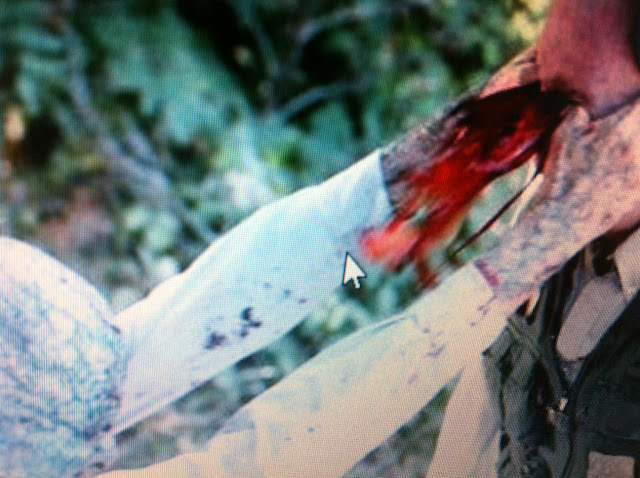 Considering that the Peter Jackson CLASSIC zombie film “Dead Alive” is known through most of the world as “Braindead”, it takes some serious balls to name your shitty movie “Brain Dead”.  This is yet ANOTHER one of these ‘comet lands and spreads zombie virus’ movies.  Why do so many no budget movies try this storyline?  As expected the film begins with a terrible CGI comet floating through space.  What does make this one special, however, is the intensely bad music playing during the intro credits.  Kevin Tenney directed the original “Night of the Demons”… so maybe this one has some promise.

[Fisherman turns zombie, gauges out friend’s eyes, rips his head in half.]

Lovelock: I think more movies need to start off with a guy’s head being ripped in half.

Starkwell: Not really sure most movies would be able to pull that off.

Lovelock: Name me a movie.

Lovelock: Add a scene at the beginning of Rob Lowe being high on coke ripping Demi Moore’s head in half.  He goes to jail and then we don’t see either of them for the rest of the movie.  Film improved.  You're welcome.

Starkwell: It’s gonna be this kind of party?

[In the next scene a huge breasted girl strips and jumps in the lake, and splashes around… in slow motion.]

[Her friend strips and joins her, displaying her full frontal nudity.]

Lovelock: To establish that the one girl is a lesbian?

Usually showing tits and ass for no other reason at all than to show tits and ass, is a show stopper for Starkwell.  It doesn’t help that the escaped convict duo, Clarence and Bob, is INCREDIBLY lame.  Lovelock is sticking around because he liked the scene where the guy got his head ripped apart.  But it’s been a while since that happened.

Lovelock: Why is Clarence still making jokes?  Bob blew the cop’s head off, point blank range, in cold blood…  Why would a guy THIS insane and homicidal have been just hanging around a little county jail?  Uncuffed? WHHHHYYYYYYYyyyyy?!?!??!?!

I think that the movie just broke Lovelock.  Plus the ‘zombie cam’ they keep using is clearly a cheap effect on a cheap camera, and if Starkwell were around, it might have made him vomit.  The movie went on for a while longer, and, though the gore was fair and the effects on the head explosions weren’t awful, the movie lost Lovelock’s attention with its horrifyingly slow pace, bad characters and BULLSHIT BULLSHIT.

Lovelock: So, the demon zombie thing can tear apart handcuffs, but the little boards on the windows stop him from entering the cabin?  FUCK THIS FUCKING FUCK!

He says that, but I know he’s sticking around because the gore is decent.

[Close-up on girl’s vagina, it spits out black goo.]

Lovelock: Ok, I’m done too.  That was unnecessary.

[Girl’s head gets ripped off.]

It ends with Clarence being blamed for everything and getting life in jail.  The movie tries real hard to be funny, but instead, it just sucks.  It's the gore and effects that saved this from being  straight up unwatchable.  That being said, the film shoots its load pretty quickly, with that head rip scene being right at the beginning.  Sets the bar high and then disappoints for eighty minutes.  FAILURE.
Documented by Kev D. and Posted at 12:45