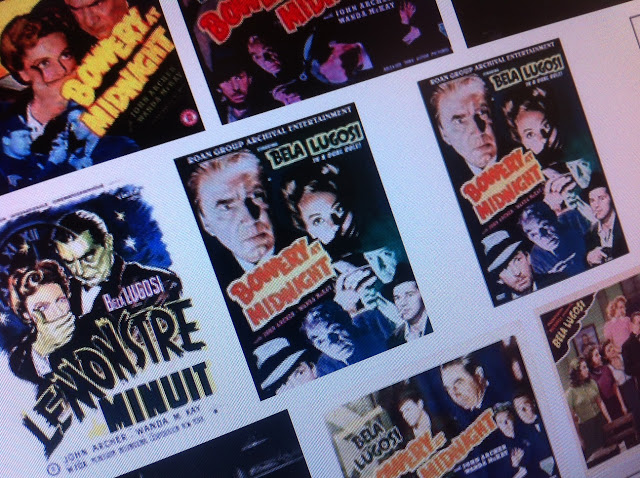 Wallace Fox directs the original Zombie master Bela Lugosi in this 1942 crime epic.  Epic?  Well, maybe not.  But the director’s name is Wallace Fox.  How cool is that?  I think Starkwell and Lovelock would settle for “watchable” at this point.  Not knowing much about this film going in simply means that this isn’t over before it even starts.

Starkwell: Who surrounds a prison with a rickety old wooden fence?

Lovelock: Apparently, prison guards in the forties that SUCK AT AIMING.

[Lugosi takes ‘Fingers’ the escaped convict into his secret office.]

Lovelock: They just don’t make secret offices like they used to.

[Lugosi uses the jewellery from his big score to give his ugly wife a present.  Also, he’s a psychology teacher.]

Lovelock: She’s easily thirty years younger than him.  Awesome.  And she doesn’t even like the pearls.

Lovelock and Starkwell were more than confused by the absurd number of characters popping up, and the fast moving, and seemingly incoherent story.  The fast pace did impress them, but not enough to overlook how little sense it all made.

Lovelock: Don’t the police know by now, that when someone says “I’d be happy to cooperate with the police” that something is very fishy?

Starkwell: I guess in the forties they still hadn't figured that out...

[Lugosi kills another stooge, and buries him in his basement.]

Starkwell: I think if I killed people, I wouldn’t keep them in graves in my basement WITH SIGNS INDICATING THEIR NAMES.

Lovelock: Well, that’s one way to do it.

As confused as they were by all the characters on screen, Lovelock and Starkwell still laughed at the fact that the Judy girl turned down the dude’s proposal.  Starkwell is pretty sure Judy’s boyfriend is the hero… Lovelock isn’t sure if he realizes that the soup kitchen owner is his psychology professor.

[Dudeface poses as a homeless man to gain access to the soup kitchen.  He realizes that the soup kitchen owner is actually Lugosi, and then he confronts him about his secret identity.  Lugosi kills him.]

Lovelock: That’s why I never moonlight as a homeless man.

Lovelock: That’s also why I never talked to professors in college.

Starkwell: Dudeface must be the oldest college kid in the world.

[Apparently the schizophrenic janitor at the soup kitchen revives the corpses that Lugosi has been killing and keeps them in the basement below the basement.]

Honestly, I think the convoluted plot just broke Starkwell’s brain.  It was so ridiculous that when Lugosi killed his wife (the one from the Psychology teacher side of his life) Lovelock asked “Wait, who was that?”  Whatever... as the police close in on Lugosi, Dr. Schizo sends him into the sub-basement where he is keeping all of his zombies, and the zombies all kill him.  Then, cut IMMEDIATELY to Judy’s house, and not only is Richard (a.k.a. Dudeface) no longer dead and a zombie, but Judy’s planning to marry him?  What the…  So the schizo janitor wasn't making zombies?  He was legitimately resurrecting people?  My brain is broken now too.
Documented by Kev D. and Posted at 08:15