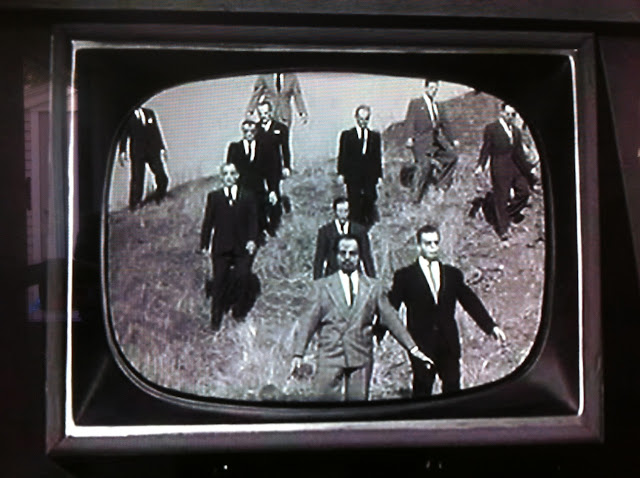 Alien invasion was all the rage in the late 1950s. Combining this with the earlier concepts of zombies surely will have a fantastical outcome. Surely is a strong word. The movie starts fast.  The scientist who died developing the bomb, rises from his grave after weird invisible legs walk over said grave.  Apparently these are invisible invader legs.  As an alien (or rather, possessed by the footprints), he visits his old scientist friends, and explains the entire alien invasion plan. Starkwell and Lovelock almost missed the whole story.

Starkwell: Yeah, on earth, we call that “crumpled up aluminium foil”.

Lovelock: Damn dude, the papers were fucking harsh back then.

Starkwell: I think the best one was the front page with the huge blank photo, claiming to be the ‘first’ picture of the ‘Invisible’ alien.  SUCH A GOOD BURN.  Eat that, Dr. Peener.

[The group goes back to the cemetery to find the Invisible Alien, and the film just replays the invisible  leg moving footprints sequence from earlier.]

Starkwell: I guess that was expensive to shoot twice back then.

Lovelock: What was the point though, he didn’t even possess the dead body?  I know you usually leave, but man… fuck this, I’m outta here.

Lovelock left and went directly to his room and fell asleep.  Oh actually, first he made and ate a sandwich.  Starkwell was hanging on, STILL trying desperately to prove that he can sometimes be the one to sit through a full movie, even if Lovelock leaves.

Starkwell: Everyone just believes it’s an alien right away?  What a paranoid era that must have been.  Nowadays people would be like “am I being Punk’d? DERRRRRrrrrp!”  Also, why are the aliens telling everyone their plan?

Very quickly, the aliens take over.  There is a montage of buildings and stuff blowing up, and zombies walking around looking creepy.  Most looks like stock footage… well, not the zombie stuff, hopefully.

Starkwell: You know, using a narrator to constantly explain what is going is cheap… but at least it takes away the confusion that most shitty movies conjure up.  Plus his voice is awesome.

It honestly wasn’t terrible, but Starkwell didn’t really say anything for the last half of the movie.  He did make a MERMAN joke when we finally saw what the Invisible Invaders really look like.  He also made fun of the ridiculously slow and inefficient laser that they used to kill one of the now visible invaders.  He also made fun of how small the alien spaceship was.  I guess maybe he did say a lot.  It just wasn’t the same without Lovelock, and frankly, I was half asleep too.
Documented by Kev D. and Posted at 08:45