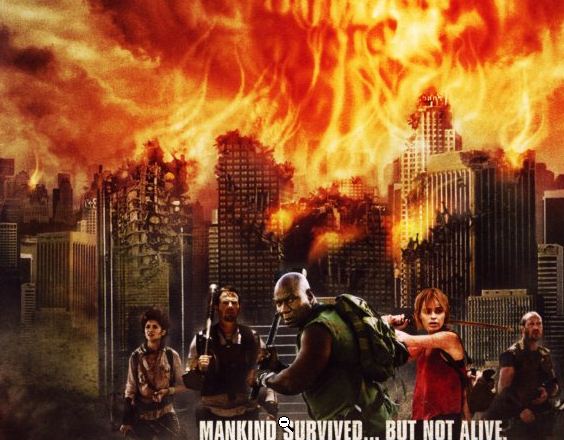 Lovelock and Starkwell haven’t exactly had good experiences with made for Syfy channel TV zombie movies.  This is the most recent one that I know of, and I felt it would be a whole bunch of fun to subject them to it.  Ving Rhames is in this?  Really?  Did I mention this is an Asylum movie?

[Six months after the outbreak, world is essentially all post-apocalyptic and shit.]

Lovelock: Well, at least the zombies are slow zombies.

Starkwell: Well, at last the special effects look like garbage.

Lovelock: Well, what is Ving Rhames doing in this?

Starkwell: Well, what was the last thing you saw him in?  “Zombie Apocalypse”? More like “Career Apocalypse”.

Lovelock: Wait… there are different levels of zombie speed?  Scratch what I said earlier.

Starkwell: I guess it’s a way of explaining why some of the extras in the movie decided to move faster than others.

At one point they mention a guy named Kirkman… an obvious shout out to the author of the recently made famous “Walking Dead”.  Unfortunately this Kirkman guy had died looking for coffee beans.  As Stakwell said “When lame movies try and reference cool stuff, they just come off even lamer.  And it ALWAYS feels forced.”  Since this is clearly The Asylum’s mockbuster to go with the now popular television show based on said work by Kirkman, this is even more offensive.

Starkwell: Obviously she stays up at night sharpening her samurai sword.

Starkwell: Obviously they sit around and eat pasta in an Italian diner.

Lovelock: This movie is one enormous cliché.  I feel like we don’t even need to watch it to know what happens, basically.

It’s like the movie is trying SO HARD to be clever, but it feels like it was written by teenagers.  Not smart ones either.  Starkwell is looking more and more annoyed by this phenomenon.

[The zombies ‘ambush’ the group.]

Lovelock: Yeah, that makes sense… the zombies knew that they would come to this exact high school, and would end up in the gym, and planned to lock the doors and ambush them.  SURE.  I'm sure that's exactly what happened.

Starkwell: This movie should come with a warning label that reads ‘Watch out for plotholes.’

Lovelock: Either that or simply ‘DO NOT WATCH', you know like, do not watch if you generally like movies.

Starkwell: Obviously they meet an archery professor and his two sexy student girls.

Lovelock: It's totally insane that you're not even making that up.

Lovelock has been quiet for a while now, and Starkwell just realized it’s because he has been asleep for the last twenty minutes.  Oh wait, he’s up.

Starkwell: Why do some of the zombies have white eyes, but then most don’t?

Lovelock: Probably for the same reason that some of them run and the others don’t.

Starkwell: What reason is that?

With very little runtime left in the movie, Starkwell decided to leave when they had Samurai girl mow down a pack of zombies with some kind of sub-machine gun that she had in a shopping cart, that they had abandoned much further back in the film and somehow just magically had once again in their possession.

Lovelock: Well, Starkwell would be happy to know that he missed BAD computer graphic ZOMBIE TIGER ATTACK!  And Ving Rhames saying “meow bitch” when he killed it.  And a happy ending.