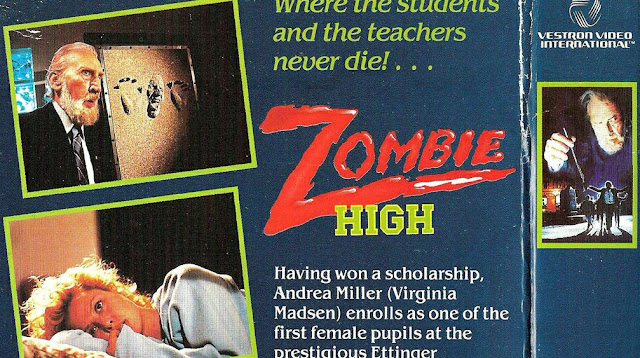 Long before getting an Oscar nomination, Virginia Madsen had the privilege of being in a little known ‘80s piece of shit known as Zombie High.  Never heard of it?  Neither has anyone else in the world.  But it’s there on Netflix, and therefore, I OBVIOUSLY need to subject Starkwell and Lovelock to it.  I don’t think that this is typical flesh-eating zombie type of stuff, even though the insanely cheesy intro might try and make it look that way, with a drawing of a living dead thing.  Anyways, let’s get this show on the road.

Starkwell: Just in case no one was sure what era it was, the director decided to make, quite possibly the most instantaneously dated intro ever filmed.

Lovelock: Seriously, I bet even in ’87 people were like “man, that shit is just too fucking eighties.”

It doesn’t take long for us to be introduced to a parade of eighties clichés.  Jock, punk, tennis preppy boys, sluts, weird hipster art dudes, you know, all that shit.  Lovelock and Starkwell seem to be basking in the nostalgic glory of it all.  They both simultaneously commented on Virginia Madsen’s “mom” jeans and how nicely it accentuated her fupa.

[We are introduced to Dr. Beauregard Eisner and his faculty of crusty white dudes.]

Lovelock: Solid name for the guy that will clearly be the villain here.

[It turns out that the creepy guy that Andrea was eyeing earlier in the movie is her TEACHER, he introduces himself to the class.]

Lovelock: Holy shit, why would he put his leg up on the chair and stand like that?

[You kind of had to see it to know what he is talking about, but I felt it was worth mentioning since they both missed the next five minutes because they were laughing so hard.]

For some reason, one of the roommates’ voices is overdubbed, really badly.  It seems to be annoying Starkwell.  Lovelock thinks it adds to the movie.  We also find out that the school’s founder was a TOTAL PSYCHOPATH, which is probably going to end up being relevant to the story.  Then Andrea has a creepy dream that she is abducted and has a microchip inserted into her neck surgically.

[Eighties Sex Jam plays as Andrea goes to meet with her teacher, after hours.]

Lovelock: Why isn’t she calling the police?

Starkwell: They should have called the police while making this movie and had production shut down.

Lovelock suddenly realized that there would be no flesh eating here.  As the “zombie” students closed in on Felner, he realized that there would likely be nothing of value to him, and in a rare move, Lovelock, and not Starkwell, walked out on the movie first.  On his way out, I believe he said “Felner?  Emerson?  Dr. Philo? Who came up with these fucking names?”  Starkwell actually hung on, and every now and then, said some shit out loud.  I did my best to document what happened, when Starkwell was all alone with this movie.

[Andrea goes to the pool.]

Starkwell: Just once, I’d like to see an actor or actress that knows how to swim.  When you actually know how to swim, there’s something so horribly unattractive about someone ungracefully flailing around in the water like a toddler during their lessons at local YMCA.  The hottest girl or guy can instantly become ugly as taint.

Starkwell: I guess high school students were MUCH older in the eighties, judging by the fact that most of them look forty.

Barry, Andrea's boyfriend, comes back to the school to find Andrea, and catches her hanging out with her teacher.  There’s a scene in the library where he punches Dr. Philo in the face, and it was easily the best scene so far, according to Starkwell.  Still not enough to bring Lovelock back though.

Starkwell: The first forty five minutes of this movie could have been packed into five minutes.  It would still be five boring minutes, but at least then I’d have forty minutes leftover to stare at a wall and imagine a better story.

I’m starting to think that Starkwell is only hanging around for the jokes.  Either that or he really wants to finally have a “zombie” movie that he sat through that even Lovelock couldn’t bother to finish.  Just then, it finally started to pick up a little steam as Andrea stumbled upon a dead Emerson and some sort of wine cellar, where the crusty faculty members were bottling up… blood?

Starkwell: So… let me get this straight… she finds dead Emerson, knows that the teachers did it, and RATHER than calling the authorities, she calls her dumb boyfriend… and when he isn’t home, she says “don’t worry it’s not urgent” to his mom?  Is that what’s happening?  Okay, just make sure.  FUCK THIS SHIT!!!

He’s struggling.  He really wants to have at least one shitty movie that he could sit through that Lovelock couldn’t.  He started to walk away, but turned around saying something like “MUST… HOLD… THE FUCK ON…”  In the next scene, Dr. Philo reveals to Andrea that he is like a hundred years old and it AWKWARDLY and RAPIDLY cuts to the school dance.  Starkwell sat on the couch, in the foetal position, rocking back and forth, crying as it repeatedly awkwardly cut from dance floor shots to Andrea and Dr. Philo arguing and discussing the "facts".  As Dr. Philo explained the faculty’s immortality formula, which involved some kind of blood wine, lobotomizing students, extracting brain tissue and replacing them with magical crystals… he just cried harder and harder and harder.

[Andrea apparently knows how to hotwire a car.  She steals one and tries to go tell the police, but UH-OH the police are also “zombies”.]

Lovelock: WOAH!  Explosion!  Maybe I was wrong about this.

Lovelock: It’s okay.  I’ll take it from here.  You can go get some rest.

Without saying a word, Starkwell ran into his bedroom and fell unconscious immediately.  Right after he left, the plot got even dumber, since, apparently, playing Barry’s shitty mix tape over the school’s speakers will magically reverse the effects of the magical crystals that have been magically planted in all of the students’ brains all around the magical world.  As if by magic.  Anyways, during all of this, there was one cool scene right near the end, where the faculty members all decomposed, melted and died.  There was even a pretty awesome decapitation.  Eventually the movie ends.  I say ‘eventually’ because, holy shit, it takes forever to end.  The best part is, no one is cured.  It ends on ALL OF THAT SCHOOL'S ALUMNI, INCLUDING THE PRESIDENT, dropping dead.  How did they hear Barry's mix tape on the other side of the country?  I'm not sure, but I AM sure that I can hear Starkwell crying from his room.  The end.
Documented by Kev D. and Posted at 20:26