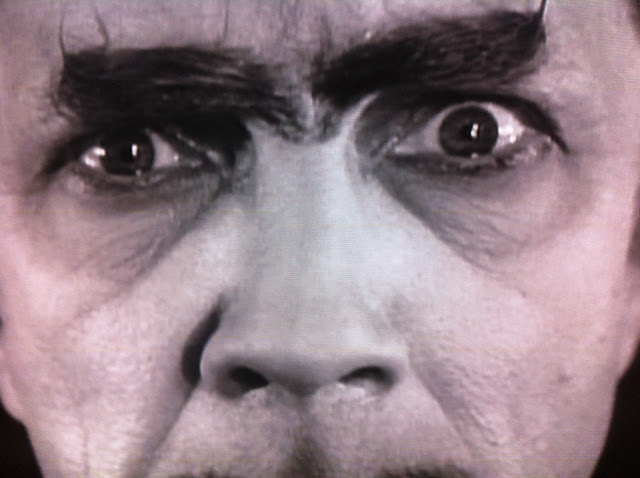 Although Romero’s “Night” laid the foundation of the modern day flesh eating zombie, it’s always important to know that the zombie genre as alive and well long before that.  Most agree that the zombie film started with the Bela Lugosi starring 1932 moving picture “White Zombie”.  While I know Starkwell will immediately appreciate the film for its significance, Lovelock will be a harder sell.  Hopefully Lugosi hits a homerun here.  Starkwell and Lovelock will be watching the Roan Group Archival Entertainment version.

[We meet Lugosi, we see zombies.]

Lovelock: What’s with the floating eyes?

Lovelock: I kind of feel like I’m being watched.  I’m freaking out already.

[Mr. Beaumont is a little touchy feely with the lady.]

Starkwell: Geez… could he make it any more obvious?

Lovelock: Lesson number one, never go to Haiti to get married at a creepy rich guy’s place, when he clearly wants to steal your bride away from you.

Why it’s the classic “witch doctor uses dead people to create an army of zombie slaves”… Starkwell and Lovelock are both enchanted by the wonderfully eerie look and feel of the zombies.

[Lugosi gives Beaumont poison so he can kill Madeline, and, I assume, turn her into a zombie.]

Starkwell: Seriously why would she have come here to get married?

[Madeline sees death in her wine glass, aka LUGOSI and his creepy fucking eyes.]

Starkwell: If I looked into a wine glass and saw that, I’d probably try and return the wine.

Lovelock: Scratch that.  The hallucinations seem cool, but the death thing is kind of a bitter oaky aftertaste.

[They show Beaumont’s castle on the cliff.]

Lovelock: Why are they showing a still shot of a painting?

Starkwell: Dude, this is eighty years old.  That’s supposed to be Beaumont’s castle.

Lovelock: It looks as lifeless as Madeline's eyes.

Lovelock: Still... it's kind of scaring the BAJESUS out of me.

[Beaumont realizes that zombie Madeline just isn’t as charming as the live version.]

Lovelock: That’s why I never kill women and turn them into sex zombies.

Starkwell: Yeah that’s why.  Wait… dude, I hope to hell that’s not the only thing stopping you…

Lovelock: FUCK!  It looks like they really drown that actor.

Starkwell: I'm pretty sure that's how the mob used to get rid of dude's back then.

[Drunken Neil journeys up to the castle.]

Lovelock: Where did the priest go?

Starkwell: Probably went home.  That’s what I would have done in his position.

Lovelock: Are we supposed to believe that zombies can open doors with their minds?  Or Beaumont was so rich that he had automatic doors in the thirties?

Starkwell: So you can accept the living dead but not automatic doors?

The priest ninjas in and clubs Lugosi over the head, just in time to save Neil and somehow force the zombies to walk off the edge of the cliff like lemmings. And then, Beaumont REDEEMS HIMSELF!

[Beaumont tosses Lugosi over the edge of the cliff.]

Starkwell: Even though it looked hilariously fake, that’s pretty gruesome for the thirties.

Madeline becomes herself again, and the priest says something funny.  And then, like so many old films, it ends almost immediately and without warning.  A true classic.
Documented by Kev D. and Posted at 20:05